In March of 2013, four economics researchers from the New York Federal Reserve published a report on job "polarization" -- the phenomenon of routine task work disappearing and only the highest and lowest skilled work still available. The authors stated:

An occupation is routine if its main tasks require following explicit instructions and obeying well-defined rules. These tend to be middle-skilled jobs. If the job involves flexibility, problem solving or creativity, it's considered nonroutine. Job polarization occurs when employment moves to nonroutine occupations, a category that contains the highest- and lowest-skilled jobs.

They based their analysis on data from the U.S. Census Bureau, which demonstrates that around 2005, the U.S. passed a threshold where more than 50 percent of all occupations are non-routine. In fact, extrapolating from the relatively straight line on the graph, at this point we should be over 60 percent nonroutine. 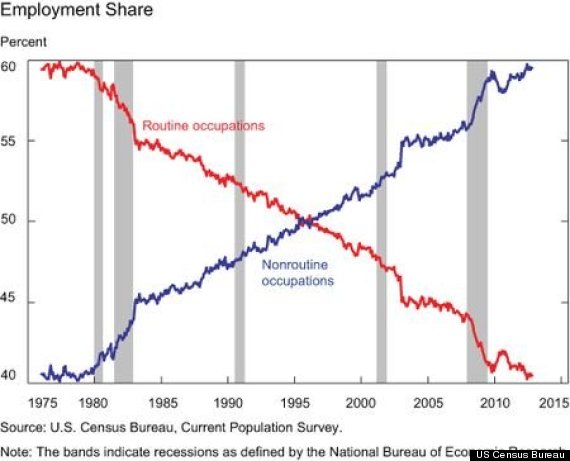 These researchers also broke out the four quadrants of the work sphere, with routine versus nonroutine work arrayed against cognitive versus manual work. 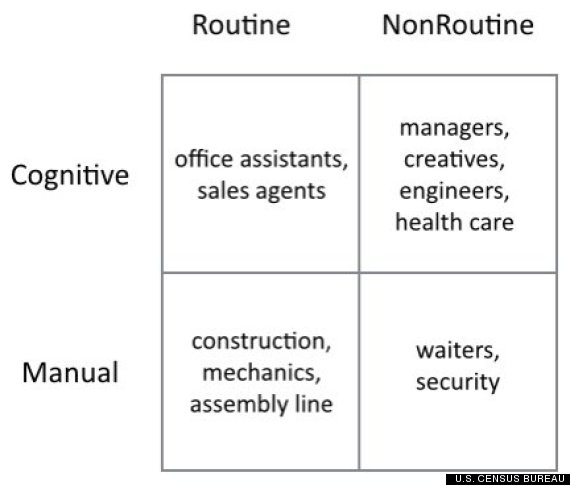 The indications are fairly stark. The work in routine occupations is trending toward zero. This fall lines up fairly well with the rise of automation of various kinds. For example, computer programs are doing the work of paralegals and x-ray technicians, and factory robots are displacing large numbers of automobile assembly line workers. There are applications that can write sports newspaper articles, based simply on the scoring history in the game.

Of course, for those who consider science fiction as the best oracle for an unknowable future, consider this shot in the dark from Isaac Asimov, who wrote in 1964 about a visit to the World's Fair of 2014:

The world of A.D. 2014 will have few routine jobs that cannot be done better by some machine than by any human being. Mankind will therefore have become largely a race of machine tenders.

Soon, all that will be left for human beings will be the non-routine, creative work. How many of our occupations will our software overlords steal away from us? Many more than today, according to Carl Benedict Frey and Michael A. Osborne, two researchers at Oxford who looked at 702 current occupations.

"Soon, all that will be left for human beings will be the non-routine, creative work."

The researchers found that approximately half of current occupations (47 percent) are at risk of going the way of the telephone operator within just a decade or two. These two researchers relied on the same matrix of work as the Federal Reserve team, and examined how quickly robotic dexterity and A.I. cognition would hollow out jobs that seem to be the preserve of humans today:

Our findings could be interpreted as two waves of computerisation, separated by a "technological plateau". In the first wave, we find that most workers in transportation and logistics occupations, together with the bulk of office and administrative support workers, and labour in production occupations, are likely to be substituted by computer capital.

Note that the "transportation and logistics" sector includes many occupations that will be slammed by autonomous vehicles, like truckers (the number one occupation for men in the U.S. currently), taxi drivers and warehouse workers. Administrative support is the number one job for women in the US, so our robot overlords are equal opportunity, at least.

Frey and Osborne suggest that the second future wave of displacement will come at some later date, when A.I. gains the secrets of creativity and social intelligence. That may take a longer time, but at some future date, lawyers, engineers, brain surgeons and even actors might be displaced by 'bots. In fact, one venture capital firm, Deep Knowledge Ventures, has already appointed an algorithm to its board of directors.

"Lawyers, engineers, brain surgeons and even actors might be displaced by 'bots."

So, we are confronted with the critical question of 2025, as I stated in the recent Pew Internet report, AI, Robotics, and the Future of Jobs:

What are people for in a world that does not need their labor, and where only a minority are needed to guide the 'bot-based economy?

While it is likely that for the next few decades the educated, creative and inventive will find avenues to gainful employment, that will not be the case for all. How will we organize our world if machines can provide goods and services at lower and lower costs while fewer and fewer have income enough to buy anything?

Can we educate our way out of this mess, or will people be forced into a return to the land, tending 40 acres with the help of several mechanical mules? Can we legislate a Luddite future, where the new levels of automation are made illegal? Or will the techno utopians be vindicated by new sorts of work -- as yet unseen -- emerge to engage the surplus workers now being displaced?

The end state is uncertain, but we are headed toward a disruption of our society on the same order of magnitude as the rise of agriculture and industrialism, but in a much more compressed time frame: decades, not generations or centuries. And that question -- what are people for? -- will taunt us because it's unclear if there is an answer or whether it is just an irresolvable dilemma.