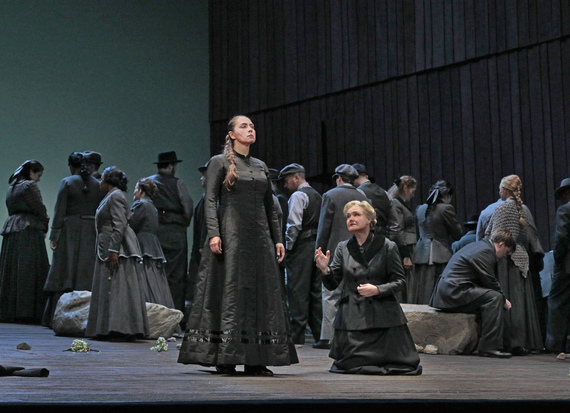 There comes a point in her Act II monologue when the Kostelnicka, the moral guardian of a turn-of-the-century mill town in Moravia and the step-mother of the titular Jenůfa, imagines how the villagers will decry her and her stepdaughter when they find out about Jenůfa's illegitimate child. "Look at her! Look at her! Kostelnicka!" Well, with the white-knuckled Karita Mattila playing the upright, deeply conflicted Kostelnicka, it simply isn't possible to look away.

Leos Janáček's Jenůfa premiered in Brno in 1904 and returned to the Metropolitan Opera on Friday for the first time in ten years. The bleak opera is a fascinating and elegantly-proportioned psychological study that elevates the thorough development of themes of jealousy, shame, and love into an airtight and believable case study. Taken from the play Her Stepdaughter by Gabriela Preissová, the plot revolves around the young, thoughtful Jenůfa who falls in love with and is pregnant by Steva, the heir to a mill. But when her childhood friend Laca slashes her face out of jealousy, Steva abandons Jenůfa, and her image-conscious stepmother, the Kostelnicka, shelters her until the baby is born. Terrified that the baby will stigmatize Jenůfa, the Kostelnicka drowns it in the ice while Jenůfa sleeps and tells her the baby died. The Kostelnicka then brokers the marriage of Jenůfa and Laca, but the body of the baby is discovered by the villagers in the thawing river on the day of the wedding. The Kostelnicka succumbs to her guilt, admits to the deed, and is taken to prison, while Jenůfa, humiliated, tries to release the insistently-committed Laca. The characters all end up about as unhappy as they were at the start of the opera and humdrum village life assumedly goes on. 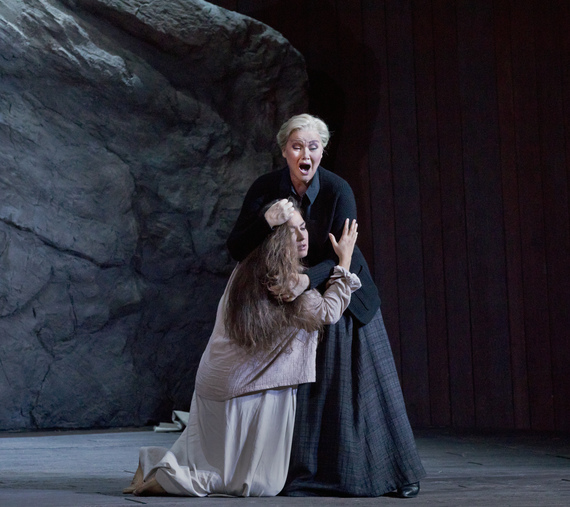 Returning to the Met for the first time in 5 seasons, Mattila made a tremendous and extraordinarily-paced house-role debut as the crumbling sexton's widow. At age 56, Mattila still commands an easily-produced, soft-grained soprano with a distant pinch that she imbues with an extraordinary intensity, dramatic alertness, and attention to the Czech text. She isn't afraid to cry out or let the voice go white for a moment for effect and the shocking lines of her Act II monologue were both enunciated and screamed to a chilling result as she resolves to kill Jenůfa's son. Her high notes were effortlessly produced and her low notes were impressively secure in what was a welcome and overdue return for the undiminished Finnish soprano.
Unfortunately, though, Mattila was matched nowhere else in the cast, least of all by the Jenůfa of Ukranian Oksana Dyka. Dyka's voice has turned from steely, laser-like focus to an edgy, strident wobble. Though her upper range is more intact and she can still ride the breath effectively, her lower range sounds dull and curdled and she didn't lend the music any of the pastoral lyricism is demands despite attempts at sincere delivery. Not a natural actress, she was majorly undercut by Olivier Tambosi's lackluster-but-inoffensive production that had her spend most of the evening posing near the stage-dominating rock. This Jenůfa wasn't so much a layered, tormented young woman as much as a baleful, shrieking village girl with a penchant for literacy.

Her suitors fared better. Daniel Brenna's forceful heldentenor might not have been an ideal fit for Laca, but he sang with a youthful rambunctiousness and acted with commitment to the production which imagined him as more of a playground bully than a predator. Joseph Kaiser took some time to warm up as Steva, but once he did, his singing was confident and his negotiation of Czech even more so. He did sometimes compete to be heard with the orchestra, though, which conductor  David Robertson lead with great attention to the intricacies of Janáček's orchestral writing. The village scenes have a lot of moving parts, and Robertson managed them with ease and even scaled down his approach for the intimate Act II. That said, his conducting was taut, exciting, and tense the entire evening. The superb Metropolitan Opera Orchestra adroitly responded accordingly and the Chorus sounded in top shape. Other standouts of the cast included the indispensable Ying Fang whose distant, pearly soprano was a delight as Jano, Hanna Schwarz who sang with commitment and worn tone as the Grandmother Buryja, and Bradley Garvin who balanced generous phrasing and beautiful tone in his short appearance as the foreman. Frank Philip Schlössmann's geologically-inspired sets and subdued costumes got the job done. 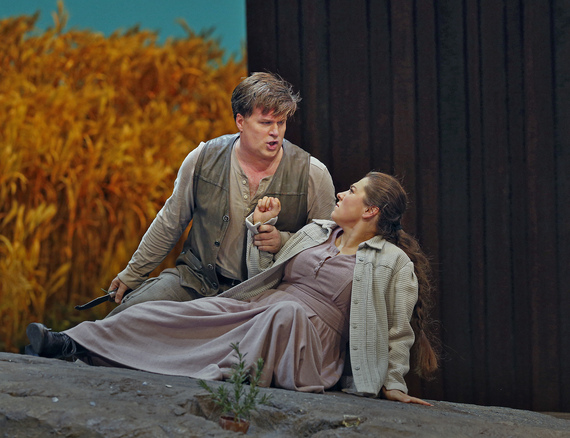 Jenůfa runs through November 17th at the Metropolitan Opera and you'd be silly to miss Karita Mattila doing what she does best (besides the splits). Tickets available here.

All photos by Ken Howard/Metropolitan Opera