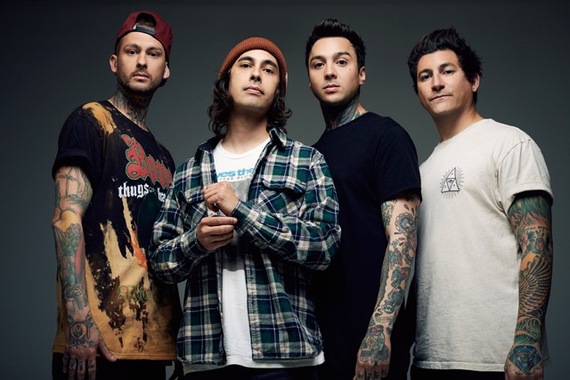 The success for the San Diego-based Pierce the Veil has been a slow and steady organic experience for the rock band started a decade ago by brothers Mike and Vic Fuentes after their previous band Before Today disbanded. Since they were young, they always set out to make music together no matter what, and Pierce the Veil solidified that commitment.

Pierce the Veil just released their fourth full-length studio album Misadventures and are currently back on the road after a long break writing and recording the album. I was able to talk with Vic Fuentes recently about the band's beginnings and how they have progressed over the years.

Going into writing and recording Misadventures, what was the mood of the band when trying to figure out what you wanted to do with this album?

We had just gotten off a long record cycle on our last record Collide with the Sky. I think our mood was pretty much just like we were ready for a change of lifestyle. We basically live two lives, the tour life and the recording life. It's a cyclical thing. We started getting the urge to want to record and then we started getting the urge to want to tour. At that time, we were just really excited to sit down with our guitars and make some music. That's where our heads were at.

With Collide with the Sky, it was a breakthrough album. What was the feeling going into making that album and then with the response of its success?

Making Collide was just like any of our other records, we put a lot of work into. We put pretty much everything on the line and worked our asses off on it. Basically, we tried to make the best record we could. We felt really proud about it. Just like we do with every record, we don't release it until we feel super amped. That record it was a big labor of love between us and our producer Dan Korneff. It felt good when we put it out, so to see the response and the build. The build was so crazy. I think that was the best part was just in seeing the steady rise and growth of the band over that time. I think that's why we toured so much on it because it kept growing. It was a cool experience.

Speaking of touring, in 2013, you guys put out the tour documentary This Is a Wasteland about your first world tour. Since then, how would you describe tour life?

We haven't actually been doing a whole lot of it lately because we took a long time to make this record, so actually been off the road for quite a bit. It's really nice to be back on the road right now. Just being back on the bus just lying in our bunks again, it just feels right. It like getting back home almost. It's a really exciting time right now playing new songs and seeing all these fresh responses and stuff. Last night was the first show of the tour so playing all these new songs for first time. It felt like a new band again. It was cool. Really refreshing.

When you're up there on stage, what goes through your mind when you look out into the crowd?

For me, we have a lot going on behind the scenes to put on a show for these people. In our heads, we're loving the show. We love listening to people sing the songs. That's the best part. At the same time, we're also firing off cues and fixing our mixers, because we put on a pretty planned out show that's got a lot of moving parts and a lot of people working on shooting off confetti at the right time and doing this and doing that. It's very theatrical for us. It's a passion of ours to put on shows like that.

Looking back to when the band originally formed, you and Mike coming out of Before Today, what were your fondest memories of transitioning into Pierce the Veil in those early years solidifying the band?

To me, the fondest memory was probably when we found that Equal Vision Records had enough faith in me and my brother to start a band on our own with a record deal, which is unheard of. It was kind of crazy that they were just like 'I know your band broke up, but we want you to still be on the label and we want you to make a new band'. Like who does that? That's so crazy. I think that was probably such a positive boost for us and to have that faith. I think that started us off pretty well.

Along with the record label's idea, how did Pierce the Veil form? Why did this band happen?

Me and Mike, we've been playing music together since we were like 15 years old in high school. We always knew we would just keep playing music for the rest of our lives together and that's what we've got lucky with continuing on a record label and being able to make another album. We were going to make more music regardless. That's where our heads were at in the beginning just knowing that this is what we were born to do and we're just going to keep doing it.

How's it like having your brother in the band with you?

It's good. It's always great to have a piece of your real family around you to experience all these new crazy things. I can't imagine not being able to do all of this with him, traveling all around the world together and stuff. I think it's definitely brought us really close. We're only a year and half apart so it's really nice having that brotherly love around at all times.

With this band, the original lineup has been together since the beginning. How has everybody been able to stay together all this time?

I think luck is a big part of it. You just never know how personalities are going to work together. A big thing about it was when we first started the band, me and Mike, when we were looking for new members, we set a precedent to anybody that were going to have try out for the band. We were like 'Hey, our last guys weren't really true musicians. They really didn't want to tour or play music. We want to make sure that you are ready to commit yourself to a life of music forever. Are you down to do that?' We set that from the very beginning and I think that's what carried on and put us all in the same mindset.

How do you think the band has progressed after all these years?

I think mainly in our songwriting. I think that's something that keeps ever-changing. We keep gaining new influences. I listened to our first record the other day and it was just so crazy all over the place. I was like 'What was I thinking?' I was thinking of a million things at once. It's just cool to see the progression of our songwriting and also of our shows. I remember in the very beginning, we tried our best to put on our version of what we do today. I remember doing it back then, doing our own little lights and controlling everything by ourselves with our feet. I remember we had these little siren lights was our first production we ever did. We were trying back then, but it's nice to see now we can actually do all of these things that we had in mind.

What's the most rewarding thing about being a music artist?

I think speaking to fans and hearing their stories, knowing that it's actually reaching people and affecting them. We like working for certain causes that you can actually see the fruits of what you put into things. For example, we work for this foundation called The Living The Dream Foundation, where they bring out kids to the shows to meet you who have all kinds of illnesses. It's so much better for me to be involved with a thing like that were you can actually see what you're doing, you can meet them, and talk to them, rather than just like donating $100 to something that you don't know where it's going exactly.

How important is it for you to use your place or popularity to do something good like that?

I think its super important. I think it's cool to find something you're passionate about and get behind it. I always looked up to band growing up that did stuff like that like Thrice or Anti-Flag. I just remember seeing them put in their booklets 'We support To Write Love On Her Arms' or something like that. That's so bad ass. We started trying to do that as much as we could as soon as people cared enough to listen to us.

What do you want the legacy of Pierce the Veil to be?

I think the legacy is definitely going to be in the longevity of the band and being able to play shows for as long as we can. Growing up with our fans is super important thing I always talk about. That's an important thing not just having one song and then people forget about you, it's more about keep putting out albums and doing a slow placed thing where you grow with each other and grow with your fans. I love meeting people that are like 'Oh man! I listened to you guys when I was in high school and now I'm graduating with kids'. I think that's the kind of legacy you have to believe, you got to keep on, keep growing, and then 20 years from now we can still go on a tour and still try to sell out some clubs.