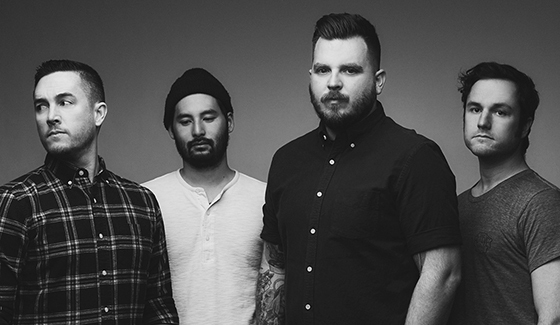 Closing in almost two decades as a band, Thrice has solidified themselves as a rock band for the people, staying true to their own influences and evolving naturally. In celebrating their discography that now spans eight studio albums, you can hear the maturation of Thrice with each project. It's a band that grows along with you. In 2011, they decided to take a hiatus to recharge their batteries and after three years, the four members of Thrice got the wheels in motion again, and as a result, they released their newest album To Be Everywhere Is To Be Nowhere last month.

Currently, Thrice is back on the road on their own headlining tour and I was able to chat with drummer Riley Breckenridge about coming back after the hiatus and the history of Thrice.

After the three year hiatus, going into writing and recording the new album, what was the mood of the band when trying to figure out what you wanted to do?

I don't think it was much different than any other record. Everybody writes on their own and everybody writes on a variety of instruments, so it depends on where everybody's heads were at individually. We didn't really discuss a really clear direction. We all have been writing during that hiatus not with the intention of making a new Thrice really, but just for whatever project we were working on the side. So when we did get together to start writing, it's always exciting to find out where everybody's heads been at and listen to ideas. From that point on, we can earmark ideas that we liked and just going into the mixing and matching process, just trying parts together, seeing what works and what doesn't, and just trying to refine stuff from there. One thing we did discuss as we started writing was that we wanted the dynamics to be a little more pronounced than they had in the past. We wanted the lows to be lower and highs to be higher, tried to take advantage of that. I think we accomplished that to a certain extent.

Was the writing and recording process any different than it was in the past?

This writing process was very different just because of geography. Teppei [Teranishi] was living up in Seattle while we were writing and recording this record. We'd have him fly down. We were doing one-offs last year or we'd do a weekend worth of shows and we'd have him fly down for rehearsals, but then we'd try to block off a few days before or after that to work on some new material. A lot of the writing was done virtually where we'd build a Logic file, a song session file, and everybody would be working at their home studio mixing and matching ideas, sharing ideas, refining arrangements, refining song structures, and stuff like that. There was a lot of back and worth online which was helpful in a lot of ways because it made us a little bit more organized and it was easier to express an idea when you could create as a demo, but it was also frustrating in some ways because we were so used to jamming out ideas being our primary way of writing stuff. It took a little bit of adjustment trying to figure out how something was going to work virtually rather than in a room together, but it was a good mixture of both.

How did the hiatus help the band? Why did you need it looking back?

I think it gave everybody a little bit of time to refresh. Everybody really came back rejuvenated and excited with a renewed appreciation for what we've done and what we can do. The morale has never been higher in this band. We're closer than we've ever been as friends I think. We're communicating better than we ever had and I think that is something time provided. It just gave people time to do their own thing. It gave us enough time away from this to realize this was a really amazing thing we were able to do. Let's find a way to do it again but make it a little bit more manageable for everybody involved.

I've heard nothing but positive reactions for the new album. It's charting high. The shows are selling. How does it feel to step away from it for a few years then come back and everyone your fans are still there for you?

It's so incredible. It's something that we are so thankful for. It's definitely something I thought about when we were writing and as the release day approached, there's a lot of pressure to come out of the gate after a hiatus and drop a turd of a record and have people be like 'well, they should have stayed on hiatus'. That people enjoyed the record and that the stuff is going over well live is so cool. It helps us feel good about the decision, not that we needed help really, but encouraging to know that people are happy that we are back and that we still got it.

Looking back to when this band formed, what was your fondest memories of those early years?

I think driving around the country in a beat up van and trailer. Not having money much anything other than gas and truck stop snacks. There was an us against the world mentality that you had to have to not lose your mind in that kind of scenario. There's also a youthful energy required to have that. Being your early/mid 20s and just being on this adventure that takes you around the United States and sometimes in other countries, it's just really cool. I'll never forget it.

Even with the hiatus, it's still the original line up. How were you all able to stick it out together for so long?

At the core, I think we're really good friends. I think we truly appreciate each others individual accounts and the four of us coming together and trying to do as a collective is something that is unique to the four of us and if we try to replace anybody, it would change that. I think part of that goes back to everybody being very involved in the writing process on a variety of instruments. The stuff that you're hearing on a record drum-wise might not be an idea I had, but me an idea Dustin had or something like that. Everybody got their hands in everything else and in a lot of situations that could make things more difficult to get along, and we definitely have moments where we have difficulty getting along, but over the years we've improved our communication and learned how to share ideas without attacking people personally. We just have good comradery and a true appreciation for whatever magic we have.

The sound of Thrice has evolved over the band's existence. Why was it important to change up things throughout that time?

I think it was just being true to our influences. Early on, we were really influenced by a lot of mid to late 90s skate punk and then metal like Metallica, Iron Maiden, and some basic straight up hardcore. As we got older and started exploring different genres of music and started getting into stuff like Radiohead, Low, Slowdive, and all this stuff that's across the board. We just felt like it was natural to be like 'Oh man. I really like this mellow, Rhodes, clean, delay, guitar idea that this band is doing. It would rad to write something like that and work it into something that Thrice does'. He never really felt like that we to follow any rules or stick ourselves in any genre tag, like a sonic box. We wrote freely and we wrote what we wanted to write and that's how we evolved.

What do feel the legacy of Thrice is going to be?

We all trusted our guts that our music was coming from a very honest place. The people that are into the band, I think they know that and that's why they've stuck by us through the sonic changes. We're not chasing a trend or we're not out to be the next big rock stars, we're just making music that we want to make and we want to hear. We're making it because we love creating music. I think people that are into us appreciate that and that's something that people will remember about us when we're gone.