My best friend Vanessa Nigro Halby and I used to climb almost daily. We met at the climbing gym, when I saw her tumbling off the top of a bouldering wall because she missed the last dyno. That's climbing speak for a move that can only be made by jumping for it. If you miss it, you'll fall.

We'd end up climbing together for years afterwards. Sometimes in the local Malibu Creek State Park where M.A.S.H. was filmed, or Williamson Rock before it closed in December 2005 to preserve the Mountain Yellow Legged Frog habitat.

We even did silly things like prance around the Bishop desert in high heels while climbing in our undies, just for the hell of it. One of our favorite spots was Joshua Tree National Park, where Citizen Mars came to film.

As our comfort level grew with one another, we unwisely stopped reviewing our safety measures with the same care as when we first started climbing. Most climbers know that 99% of accidents and fatalities in this sport happens from human error and not equipment failure. Vanessa had sadly lost a loved one to a tragic climbing incident a few years ago already. We understood what the risks were. 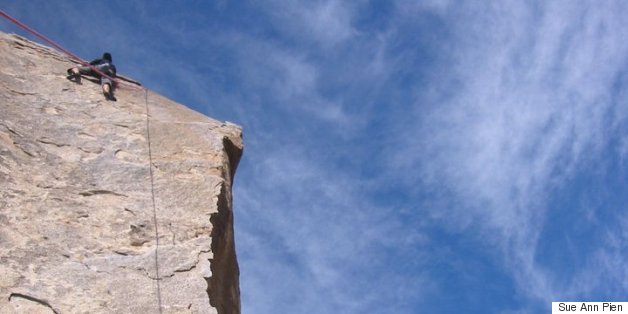 One outing, we took a newbie with us to Point Dume along the Pacific Coast Highway. It was known for some sketchy bolts near the ocean but the views were fantastic. I saw dolphins jump out of the water when I finished a sunset lead there once.

We had just lowered the newbie from her first climb. Vanessa put her harness on, and I was all set to belay. I should have double checked her knots, but I didn't, assuming she'd be ready from our years of climbing together. She made her ascent without resting on the rope once. At the very top, she climbed over the bluff to set us up on another route.

And then I heard her scream. The entire time she climbed, her figure eight knot had been half-undone. Our newbie climber had decided to untie it partly before unharnessing. I didn't realize Vanessa slipped herself right into the harness, still tied to the unfinished figure eight without redo-ing it from the beginning.

If Vanessa would have taken any rest along the climb, or leaned back onto her harness, she would have fallen dangerously. Unbeknownst to any of us, she had free solo-ed the entire climb. I was crying uncontrollably because I nearly killed my best friend.

To this day, no matter what climb I'm doing - whether at the gym, or with a climbing superstar - I double-check our safeties. I'm applying this experience to future missions with Mars One teammates.

Risking our lives for a greater feat, whether it's finishing a climb or living together on Mars, forms an intense bond. This may take years for some of us, and sometimes mistakes will happen along the way. If we are lucky enough to survive these mistakes, we can bring new knowledge and learnings that can benefit not only the Mars One team itself, but humanity as a whole.