WASHINGTON -- While Arlington National Cemetery may be the No. 1 burial site on visitors' travel checklists in the nation's capital, it's by no means the only cemetery worth visiting.

But if you're appreciate great sculpture, a visit to Rock Creek Cemetery, a gigantic hilly expanse of land adjacent to the Petworth neighborhood, should be on your list, regardless if you're a tourist or a local.

Why? it's the home to a famous Augustus Saint-Gaudens sculpture that honors Clover Adams, the wife of essayist Henry Adams who committed suicide in 1885 by drinking photographic chemicals.

According to the Smithsonian American Art Museum, which has a reproduction of the Adams memorial sculpture:

[Henry] Adams, who steadfastly refused to discuss his wife's death, commissioned Augustus Saint-Gaudens to create a memorial that would express the Buddhist idea of nirvana, a state of being beyond joy and sorrow. In Adams's circle of artists and writers, the old Christian certainties seemed inadequate after the violence of the Civil War, the industrialization of America, and Darwin's theories of evolution. Saint-Gaudens's ambiguous figure reflects the search for new insights into the mysteries of life and death. The shrouded being is neither male nor female, neither triumphant nor downcast. Its message is inscrutable.

If you're looking for the memorial, it can be tough to find -- it's shrouded by shrubbery on a hillside in the eastern section of the cemetery.

Make no mistake: Rock Creek Cemetery is not in Rock Creek Park. It's part of St. Paul's Episcopal Church, a parish that predates the founding of the nation's capital. The parish celebrated its 300th anniversary this past weekend.

In the 1830s, the church opened the cemetery up for public burials. (Where did the "Rock Creek" name come from? The parish was located along the old road that led to Rock Creek, parts of which today are still named "Rock Creek Church Road.")

Who is buried there? Alice Roosevelt Longworth, the daughter of President Theodore Roosevelt; Charles Corby, the creator of Wonder Bread; Harlan Fiske Stone, chief justice of the Supreme Court; Upton Sinclair, author of "The Jungle"; and plenty of congressmen, judges and other government officials.

It's still an active cemetery: Gore Vidal plans to be buried there.

Planning on visiting Rock Creek Cemetery? It's easiest to drive or bike, but via public transportation, two Metrobus routes, the 60 and H8, stop at its gates at Webster Street NW and Rock Creek Church Road. Dogs are not allowed in the cemetery. 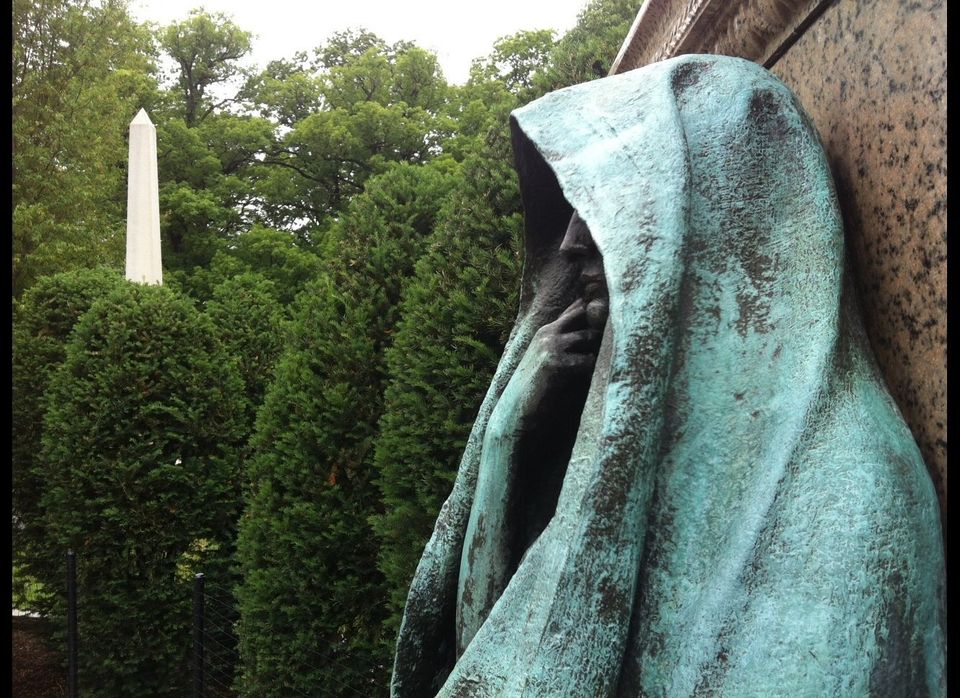 1 / 23
Rock Creek Cemetery
The Clover Adams Memorial, featuring a sculpture by Augustus Saint-Gaudens, honors the wife of Henry Adams, who committed suicide in 1885 by drinking chemicals used to develop photographs. Henry Adams wanted Saint-Gaudens to create a "memorial that would express the Buddhist idea of nirvana, a state of being beyond joy and sorrow," <a href="http://americanart.si.edu/collections/search/artwork/?id=21528" target="_hplink">according</a> to the Smithsonian American Art Museum, which has its own reproduction. "The shrouded being is neither male nor female, neither triumphant nor downcast. Its message is inscrutable," according to the museum.
Michael Grass