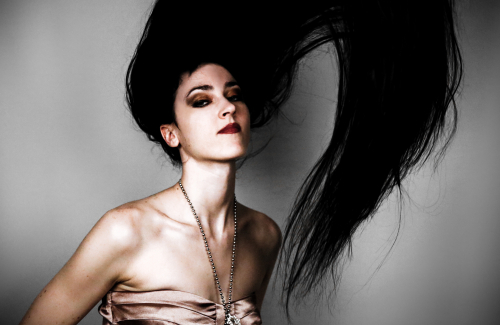 The duo of Kimberly Freeman and Jason Rufuss Sewell are musical nomads of sorts and their band One-Eyed Doll cannot be held in any one place at any time. It's a band vivid with shades of musicality that are not often ventured into by many, chock-full of a sharp-wit dark and twisted sensibilities which paint a bright picture in your mind.

With their newest album Witches, One-Eyed Doll tell the story of the Salem witch trials through a conceptual vessel poking into the mind states of all many people involved. Witches captures the fear and emotions of the story swimmingly using songs bordering on everything from heavy metal, bluegrass, and even folk music.

Recently, I was able to chat with Kimberly and Jason about the band and the new album before they hit the road for their current headlining Halloween tour, and here's a little bit of what we talked about.

Witches is a concept album. How did that all come about?

Kimberly: I came across the story of a lady in the late 1600s in Salem named Mary Easty and she was one of the people who was executed for witchcraft during the Salem witchcraft hysteria of 1692. Her story just inspired me to write a song and that song was "A Rope For Mary". I kept reading about her and doing more and more research about the events surround her death and I learned a lot about the Salem witchcraft hysteria. The more I read, the more I wrote. I was just really interested in what went on, all the different characters of the story, the executed people, the town folk who were just losing their minds, and the children who started the whole thing. I just kept writing and the next thing you know, I had the whole Witches album totally written. A little bit previous to this, Jason and I had finished the tour and we camped out in the Redwoods in our tour bus playing acoustic instruments in the woods. Most of the music came from that time just jamming in the woods. We put it together with the lyrics and melodies I wrote about the Salem witchcraft hysteria starting with "A Rope For Mary" and boom, concept album. It was really fluid like writing one song really.

What perspective is the story on this album being told from?

Kimberly: Actually, its from a lot of different perspectives. Its interesting because it started out from the ghost of Mary Easty, it started out from her perspective. She's looking back on her life and what happened. As I kept writing, I started using different perspectives, so some songs like "Witch Hunt" are from the frightened villagers perspectives. Just the town folk, the people who were killing our neighbors out of fear. The album begins with "Ember", which is a song from the afflicted girl's perspective. There were these young girls, who started the whole thing, they started acting out and having fits, which could look like possession, and they were accusing people in the town of afflicting them with their witchcraft and that's how the whole thing started. "Prayer" is from the town's folk at church. There was a preacher in that town, Samuel Parris, who was an awful person and he was a fearmonger and he scared people into being absolutely insane. The way the Puritanism was, it was an extremist religion, and people were so scared of going to Hell, and they were so scared of Satan sneaking up on them and taking their children, they had to punish themselves constantly. That's what "Prayer" about, the progress of people's fear turning into murderous intentions all in the name of God. Then, there were different characters in the story who's perspectives the song took on. "The Ghosts Of Gallows Hill" is from the perspective of several people who were executed. "More Weight" is from the perspective of the people who crushed a man who was accused of witchcraft. They crushed him with stones. His last words were "more weight". There are a lot of different perspectives; it's not just from one. I wanted to have a broad story telling, so I skipped around a bit.

You definitely have a unique look and sound. Is that more of an extension or exaggeration to your real life personalities?

Jason: We don't put a huge amount of thought into what we are going to do. We'll go around and shop at some costume shops or thrift stores, and try to come up with some cool props and costumes for the stage.

There is a bit of a dark, comical look to One-Eyed Doll. Where does that come from?

Kimberly: A lot of my influences as a performer come from my grandpa, Bernie Jones, my adopted grandpa who was a performer all his life. He was a professional musician. He performed Vaudeville and Burlesque and Polka and kind of some punk rock stuff for his day. He was a member of the Spike Jones troupe, which was very experimental. They did all sorts of crazy stuff. His was one of the first things I ever saw as a kid that I would consider performance. It was at this house party, and he did this little performance right there in the living room. He put on this particular hat and he became this character with a perfect Swedish accent. He pulled jokes, he sang, he danced, he played instruments, and he got everyone to sing along. He's just a big clown. It was very intelligent and a little dark. I think that probably stuck with me and I didn't even realize until much later that I was really emulating him. When I started playing music, it was a little bit of dedication to him. When I named the band One-Eyed Doll, it was a reference to him. He had one eye.

One-Eyed Doll is currently on their headlining Halloween Tour 2015 with Stitched Up Heart and Run 2 Cover and will land at The Token Lounge in Westland, Michigan on Tuesday, September 29th. One-Eyed Doll's "Witches" album is available now. For more information, visit oneeyeddoll.com.