Is there really a scientific strategy for winning the schoolyard game of rock-paper-scissors? Apparently, there is -- and a new paper gives all the details.

For the research paper, scientists at Zhejiang University in China had 360 students play 300 rounds of rock-paper-scissors, with the victors of each round winning cash rewards. The researchers observed each round, looking for statistical clues and patterns to winning the game.

The players who won the first round of a game tended to repeat their same pattern of moves in subsequent rounds, The Telegraph reported. Players who lost were more likely to switch their moves in a "clockwise direction" (going from rock to paper, paper to scissors, or scissors to rock). 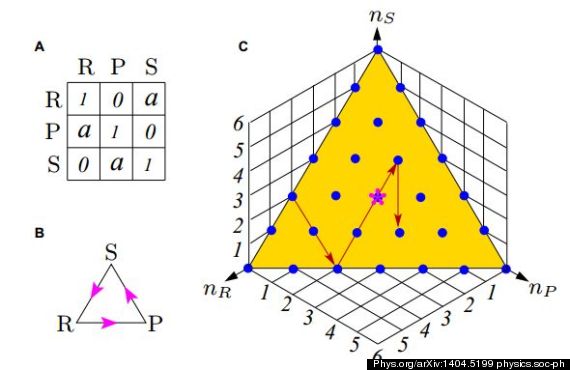 A diagram of the rock-paper-scissors game in the researchers' new study.

The researchers said in their study that this strategy seems to defy the Nash equilibrium theory, which suggests that every player chooses his/her actions with equal probability.

The theory was named after John Forbes Nash, Jr., the American mathematician who was the subject of the 2001 movie "A Beautiful Mind."

It turns out that the new strategy actually upholds the long-held "win-stay, lost-shift" theory, which suggests that people tend to stick with a winning strategy.

"Our theoretical calculations reveal that this new strategy may offer higher payoffs to individual players," Dr. Zhijian Wang, a a researcher at the university, wrote in the paper. "We hope this work will stimulate further experimental and theoretical studies on the microscopic mechanisms of decision-making and learning in basic game systems."

The paper, entitled "Social Cycling and Conditional Responses in the Rock-Paper-Scissors Game," was published April 21, 2014 in the preprint journal arXiv.org.