The last time I was in Colorado, it was for the 2008 Democratic National Convention, and the city of Denver struck me as a pretty easy-going place, with friendly locals and cab drivers that basically deserve some sort of humanitarian award. But then someone decided to install a massive statue of the Egyptian God of the Underworld at the airport, and now the whole state has been engulfed by 2010 candidates who have declared war on each other.

Have you heard about the high heels? Well, in the race to decide the Republican candidate for U.S. Senate in the Centennial State, that's pretty much all anyone wants to talk about anymore. Former Lt. Gov. Jane Norton wears them! Former Weld County District Attorney Ken Buck doesn't. His studied disregard for female footwear is apparently the number one reason he thinks people should vote for him. Or so he said, in a sexist joke he told on the stump. Norton countered with an attack ad of her own.

And the debate rages. No, seriously! It really does! There was a actual debate Thursday night and today, the Denver Post devotes the first eight paragraphs of a fifteen paragraph piece exclusively to the matter of shoes. (It does eventually get around to talking about Afghanistan, where I'm told we're fighting a war.)

Elsewhere, the GOP has two candidates battling it out to determine who will be America's Next Top Person To Run Against Denver Mayor John Hickenlooper To Be Governor Of Colorado. In one corner, we have former 3rd District Representative Scott McInnis. In the other, entrepreneur Dan Maes. And parachuting into the ring, we have Tom Tancredo -- former Representative and real-life David Mamet character (his policy: "Always be closing (America's border)").

Tancredo is not happy! (But you already knew that, because we are talking about Tom Tancredo.) And he's issued a crazy ultimatum to everyone involved:

If they don't, he said he will run for governor as an American Constitution Candidate, a move likely to split the Republican Party in November's general election.

"I honestly can't believe he's doing this right now," Wadhams said. "By creating this false choice that they have to get out now or I get in, is nothing more than Tom following his own ambition."

Wadhams position is that if Tancredo jumps into the race, it will essentially split the conservative vote and pave the way for a Hickenlooper victory. Tancredo believes that this outcome is going to happen anyway if the choices are McInnis and Maes. And so, Tancredo wants the two candidates to follow this insane plan of his -- to save Colorado:

Tancredo called upon Scott McInnis and Dan Maes to commit to leaving the race Aug. 11, just hours following the results of the primary. That way a Republican vacancy committee could appoint a replacement. Tancredo said he doesn't care if the substitute is not himself.

So, the idea is that the two competitors will commit to not running before the primary, then they actually stage the primary, and then the winner will say, "Like I promised Tom Tancredo, I will now quit the race, for some reason!" This does not seem likely to happen!

But as angry as Tancredo is at the state of the gubernatorial race, at least he's fighting his battle with political tactics and hasn't resorted to raining actual blows upon actual people. That may not be the case in the Democratic U.S. Senate primary.

The battle between state House Speaker Andrew Romanoff and Senator Michael Bennet has devolved into a street fight. By which I mean, an actual street fight:

Obviously, this is how I imagine it: 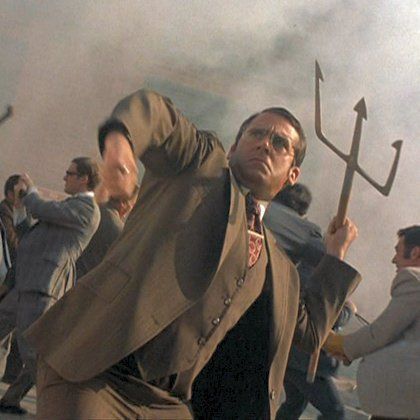