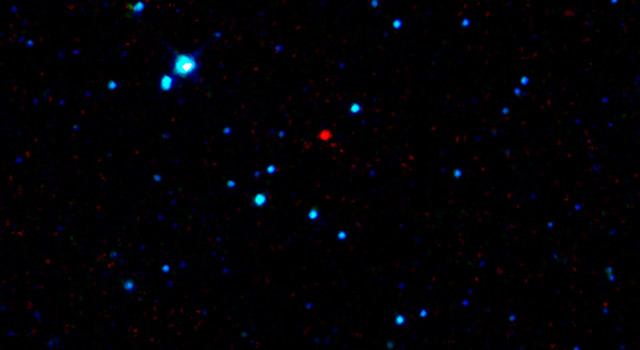 Did God make the little red dot in this picture? If you buy intelligent design -- the idea the God, oops, sorry, an intelligent designer to be named at a later date, created everything in the universe with a plan for human life in mind -- well, you'd have to say yes.

But that little red dot cries out for explanation. It is an asteroid whose orbit more or less intersects with ours, one of countless near-earth objects that potentially threaten civilization. A newly launched satellite called WISE discovered it earlier this month.

Fortunately, according to the WISE project's principal investigator, astrophysicist Ned Wright of UCLA, there's little chance that the one-kilometer chunk of rock will strike the Earth. (You can hear my interview with Wright on my radio program Science Odyssey.) But even if the asteroid known as 2010 AB78 doesn't pose much of a threat, there are plenty more lurkers out in space that could spell doom for the human race.

Just ask the dinosaurs. Oh, wait a minute! You can't! The nail in their coffin appears to have been a massive impactor from space that struck in the Gulf of Mexico 65 million years ago.

What are the odds of that happening again? If history is any guide, another major blow is highly probable. There are more than 30 megacraters across the face of the earth, each one representing a life-threatening impact. Just over a hundred years ago, a chunk of rock and ice the size of a football stadium came hurtling in over a sparsely inhabited region of Siberia known as Tunguska. It exploded in the air with the force of a hydrogen bomb, flattening everything for nearly a thousand square miles.

This was just a pee-wee, however, compared with some of the hulking monsters that slip silently past the Earth with chilling regularity. Just last year, an asteroid estimated up to a mile in diameter whizzed by less than 15 times the distance to the moon. If you want to make the hair stand up on the back of your neck, take a look at the table of these NEOs that NASA compiles

Then ask yourself, why have we been so lucky? This is one of those places where science and religion intersect. You might be tempted to picture the hand of God swatting away killer asteroids to keep his favorite creatures safe. But why, we have to ask, would God need to do that? If he custom-built the universe, why didn't he simply make a cleaner job of it?

It's not just the occasional blockbusters we have to account for. Every day many thousands of micrometeorites enter the Earth's atmosphere. Over the span of a year, a ton or more of larger meteorites rain down upon the Earth's surface. Just this week, three of them came crashing through the roof of a doctor's office in Virginia.

What are we to make of all this? The easy inference to make is that the universe was not intentionally designed, that it just happened by accident. This is possible. But there is a more subtle inference we can make. It may be that the universe we inhabit was intentionally created to foster life. If so, however, the evidence refutes any claim of optimal design. This simply isn't the best of all possible worlds. We can see for ourselves how it could be done better. For one thing, no asteroids larger than a basketball, please.

The evidence also makes a hash of claims that a deity is actively protecting us. True, there were a great many more big strikes in the distant past, but that trend is easily explained, and the fact remains that we are in peril, sooner or later, of a world-altering impact. Wherever the big one hits, it will affect every living being, because giant impacts put huge volumes of debris into the atmosphere, creating a sooty blanket that would prevent sunlight from filtering through for years.

So, on the evidence, we remain free to believe in a Creator, but we have to accept that the universe we got was the best He or She was capable of producing, and we have to rely on ourselves to keep it going as a haven for intelligent life.

To do so, we must put far more money and effort into the program to detect and deflect near earth objects. To inspire ourselves, we may want to invoke a well worn saw of Algernon Sydney's: God helps those who help themselves.

Voting Made Easy
Register to vote and apply for an absentee ballot today
Register now
More:
healthy living asteroidscienceNatural Disastersreligion
Newsletter Sign Up
The essential guide to taking care of your mind and body
Subscribe to HuffPost’s wellness email
Successfully Subscribed!
Wellness delivered to your inbox