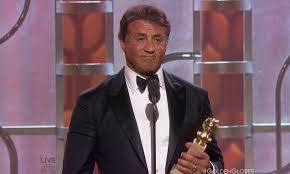 The other night at the Golden Globe awards, Sylvester Stallone got the biggest standing ovation of the entire evening. Everyone loves a comeback. At the podium, he spoke of being at this ceremony 40 years earlier. Coming back after being gone is harder than the first time.

I often say to my students if they come to class after an absence, whether they have been ill or drunk or unable to afford a gym membership, I say to them that coming back is harder, because unlike when you are an exercise virgin, if you have been fit -- or thin -- in the past, then you feel doubly worse when you return because you remember!

My friend likes to say that if you ask your mind negative questions, then your mind looks for negative answers. This is true if you are attempting any kind of comeback, but especially true in the world of fitness.

The best advice I can give those of you trying to go back, is to notice when your brain starts digging in the mental garbage can and replace it with a positive thought. So that, "Why is this so hard when I used to be able to do it?" becomes, "I know I can get back to where I was, because I achieved it before." Focusing on how you can get it back -- feel younger, stronger and able to live a healthier and therefore happier life -- is the key.

Who would've ever guessed that Rocky Balboa could make a comeback... as a senior citizen, no less. And with his big screen comeback, which was actually bigger than his first successes.

So there is hope for us all. I have never really had to make much of a comeback in my fitness, except for a few surgery recoveries, and so for me, fitness has been easy. It is simply a matter of doing what I did yesterday. It's like being on cruise-control.

But out of the gym, I do not even have a cruise-control. If I want to be happy in matters beyond the state of my health, then I have to aim to make a big comeback. And I have been inspired by the Sylvester Stallones of the world.

More:
Golden Globeshealthy livingHealthFitness and Exerciserocky balboa
Newsletter Sign Up
The essential guide to taking care of your mind and body
Subscribe to HuffPost’s wellness email
Successfully Subscribed!
Wellness delivered to your inbox