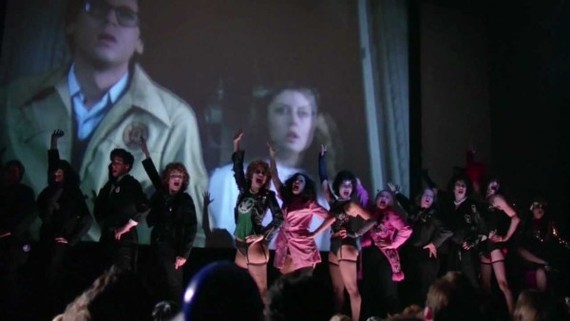 In 1987, when The Rocky Horror Picture Show was just a pre-teen, I was a 15-year-old virgin -- both in the RHPS sense of the word (i.e. having never seen the cult classic) and literally (i.e. having never done the deed). Enter 17-year-old Craig Bernstein... well, both figuratively and literally: he was my first real boyfriend, my first love, my first. In addition to introducing me to the sins of the flesh, he introduced me to the wacky world of Rocky Horror.

We would watch it on tape, with Craig impressively delivering all the audience-participation lines timed perfectly. He loaned me his cassettes of the soundtrack -- both from the movie and the stage play -- and I studied them with the laser focus only an Asp-y programmer or a teenage girl in love can summon. (I hadn't listened to the songs in decades, but when putting together the medley for our first RHPS anniversary post, every single lyric from every single song came back to me instantaneously and effortlessly.) I never made it to a midnight screening in the Village; Craig and I only went to a single showing in my small suburban New Jersey town -- the turnout was measly; the participation, pathetic.

Still, The Rocky Horror Picture Show held for me the allure of silly yet sophisticated subversiveness. It represented the adult world of limitless possibilities that I had just gained entry to by cashing in my V-card. Granted, there's nothing that transgressive about teenage sex in suburbia; but because of my relationship with Craig, I could do more than just sympathize with Brad and Janet's lost innocence: I could empathize with it. Love and lust were no longer just a dream: like Janet, I felt released, bad times deceased, my confidence had increased, reality was here.

For the 40th anniversary of the film, I got in touch with Craig (via Facebook, natch) and took a trip down memory lane with his very generous cooperation, discussing with him RHPS as a youthful rite of passage -- not only for us almost 30 years ago, but for all the hormonal kids who've done the Time Warp over the past four decades. 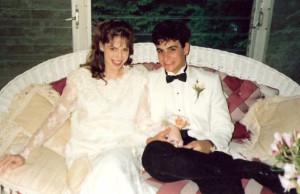 LO: How did you first get introduced to Rocky Horror?

CRAIG: My first exposure to Rocky Horror Picture Show was at 10 years old, watching the movie Fame with my sister.  That scene where Ralph takes Doris to The Waverly (pictured above).  They get stoned and she loses all her inhibitions, gets up on stage and dances the Time Warp..I had no idea what it was all about but the movie (Fame) left the impression that there was something sophisticated and cool happening out there in the world.

What was the extent of your fandom in high school (i.e. how often would you go, would you dress up, how many times did you watch it on video tape, which versions did you have on cassette, etc)?

I got really into RHPS during my Junior year in HS .  Friends and I would go to the local midnight show nearly every Saturday night that year.  We ended up making friends with a few groups of kids from other towns and it was a fun scene for a while, something I looked forward to during the week.  I went to see it at the 8th street playhouse one night and Richard O'Brien was there...I suppose that was the pinnacle of my fandom..

I didn't dress up but I did bring a bag of props: rice, newspapers, water gun, flashlight, toilet paper, rubber gloves, playing cards.  I remember owning a bootleg copy on videotape and scrubbing through it on occasion trying to pick up lines (and practice!).  I owned three cassettes: The RHPS Soundtrack, The Rocky Horror Show (the stage play) Original Cast Recording, AND Sal Piro's audience participation album.

What was the appeal?

I was into theater and performing back then and RHPS gave me license to be expressive week-to-week.  More so it was an opportunity to be a part of a group that was different and peripheral to the mainstream.  I wasn't into drinking and drugging so it was a safe and fun way to participate in the counterculture.  A way to feel alternative, I suppose.  Remember we were kids then -- I didn't even have my driver's license yet (my friends drove me everywhere); it felt cool to be out late doing something fun with interesting kids while mom and dad were home asleep.

As a straight high school boy in the 80s, how did you feel about all the non-traditional sexuality portrayed in the film: transvestism, gay sex, polyamory and swinging, muscular men in gold lame hot pants, etc...? I could see a lot of guys of that age and orientation especially at that time being freaked out by all the sexual fluidity.

I thought it was a lot of fun.  Safe to say I'd never seen a movie where an alien transvestite impersonates a guy's wife in order to have sex with him..so it was titillating and shocking to a straight high school kid but not in any way that made me uncomfortable.  Looking back at it now, RHPS is sort of the paragon of voyeurism, isn't it? There's something kinky there for everyone and I think that's part of the broad appeal.  It gives folks from different walks of life a chance to peek through their neighbor's window for a bit and check out a different party.  It all played like that line we'd say to the screen: "Same set...different lighting...(cheap movie)."

Did you introduce all your high school girlfriends to it?

Nope. Just you!  But I was invited to a senior prom by a girl I got to know through those Saturday night shows (my junior year, her senior year).  Terrible night, btw.

What kind of effect do you think the movie has on young people seeing it for the first -- both back then and now? Either solo, or as a couple? There's a reason newbies are referred to as virgins, yes?

Looking at it 30 years later I see how the film's message to young people endures and remains pretty basic.  It still says what most young people yearn to hear: give yourself over to absolute pleasure, don't dream it be it, and all of that.

So for young people seeing the film for the first time today, chances are that they're leaving the theater with the same sense of liberation that kids left with in the 70's and 80's: That it's fun to be the freakiest version of themselves, it's fun to lust after whom you find attractive, it's fun to act impulsive sexually.

And you're right, losing your virginity is an important rite of passage for a young person.  Brad and Janet start their day as innocent newly wedded virgins but end it very differently, changed forever by the knowledge (carnal and otherwise) of a larger, more complex world. So in that sense their journey strikes me as a metaphor for the rite of passage of adolescence.

It makes sense that the experience of watching the film for the first time is likened to losing your virginity because one way or the other you left the experienced changed, knowing a little more about the larger world than when you bought your ticket and took your seat.

Since high school, have you ever gone back to a midnight screening? Or re-watched it from beginning to end? Or listened to the soundtrack? Dressed up as a character for a costume party? Done the Time Warp whenever it came on at a club? etc.

Any deep thoughts about how far we've come over the past 40 years (or how far we still need to go), in terms of sexual freedom, gay rights, artistic expression, decent cult classics, etc?

I'm proud of how far we've evolved in 40 years. It's truly a different world for LGBT people today.  My daughter is a freshman in high school and has friends who are out.  When I was growing up, those kids would have had a much tougher time being themselves (i.e. they would have been tortured by sadists).  I'm amazed at the multitude of positive portrayals of LGBT people on mainstream and social media and from a state and federal judiciary level too -- it truly is a different world.

As far as decent cult classics...not sure kids go to movies that much anymore...I went to see Star Wars at the Zeigfeld Theater when it was released on film probably 10 years ago and kids were dressed up as Princess Leia and Han Solo et al.  They got to the part when Ben Kenobi says, "Obi Wan...now that's a name I haven't heard in a long time..." and without missing a beat some kid yelled out "HOW LONG?" "...a very long time..." So who knows, maybe that's the next Saturday night audience participation cult classic..

Will you take your kids when they're old enough?

Sure.. If I can get them to spend a Saturday night with me, then why not!

Back in April, there was word that Fox would remake it into a 2-hour television event -- probably not unlike their "Sound of Music" and "Peter Pan," except not live -- to coincide with the 40th anniversary. I have yet to find confirmation of its pre-production or its demise, but what do you think? Kill it like Eddie, or just give yourself over to absolute (guilty) pleasures?

Oh that's a tough one....I doubt I will watch it...But I will look forward to the snarky comments bashing it on social media!

Flash forward 25 years to Lo married with kids: I Took My Kids to the Jeff Koons Retrospective (Oops!)