Four years ago, Forrest Fenn, a Santa Fe bazllionaire, hid a treasure chest full of booty including priceless ancient artifacts, gold nuggets and precious jewels estimated at $3 million. The treasure is still waiting to be found, but is now rumored to be worth as much as $5 million. Because Forrest Fenn is such an incredible character (think Will Rogers stirred in with Indiana Jones), I went back to Santa Fe to see what new information he'd volunteer about the treasure. 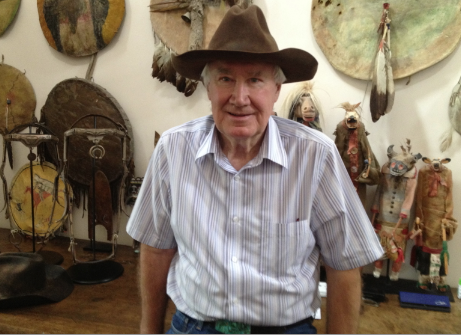 At his artifact-filled home on the old original Santa Fe Trail, Fenn said, "Recently, I had a dream in which I inventoried the contents of the treasure chest. I got so excited it woke me up and I couldn't go back to sleep." Fenn has admitted that the treasure is hidden somewhere in the Rocky Mountains north of Santa Fe, higher than 5,000 feet above sea level, it's not in Nevada, Idaho, Utah or Canada, and it's hidden over 300 miles west of Toledo, Ohio.

He wouldn't give me any more clues, but he's just written a new book, Too Far to Walk (available at www.oldsantafetradingco.com), which includes a pullout map. "The map shows the area in which the treasure is hidden," says Fenn with a mischievous grin, "But there's not X on it." Too Far to Walk is a scrapbook of memories. "Some of the photos and drawings are a peep-back into my early life and the way things used to be when gas was 11 cents a gallon," says Fenn. "Others depict a colorful life lived out on the edge where the cautious and faint of heart fear to go." There might not be an X marking the treasure's location, but the two-page map, made especially for Fenn's book, includes the 24-line poem with clues to the treasure's location. The poem was originally published in Fenn's memoir, The Thrill of the Chase, which went viral and sold on eBay for $400. 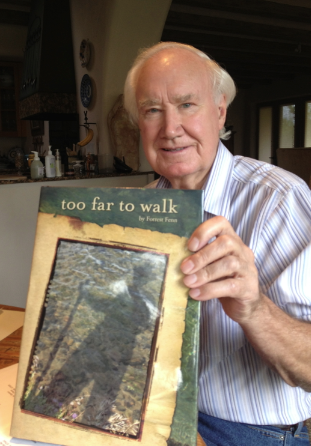 Forrest Fenn with his new book, Too Far to Walk

When I asked for a new clue, he gave me that mischievous wink again and said, "I don't want to narrow the search area anymore. The treasure is not easy to find, but it certainly isn't impossible. All someone has to do is solve the clues in the poem and the chest can be theirs."

"Included on the chest is my autobiography," he said. "If someone finds the treasure far into the future, I want them to know who did such an outrageous thing. So I pulled a couple of white hairs from my head and put them in the jar that contains my autobiography. Future scientists will be able to make DNA, Carbon-12 and other tests to learn about me and the times in which I lived."

The treasure might be found tomorrow or light years from now, but the mystery continues. So far, Fenn has received 22,000 emails, including one from a 14-year old girl who asked, "Is the Hope Diamond in the Treasure Chest?" Another seeker wanted to know, "Is the gold going to rust?" Two guys fighting for the same parking space in Jackson Hole discovered they were both looking for the treasure, so that afternoon they searched together. A mother wrote that her son wanted to look for the treasure in Grebe Lake, but was worried. "Does Yellowstone Park control the alligators? She asked. 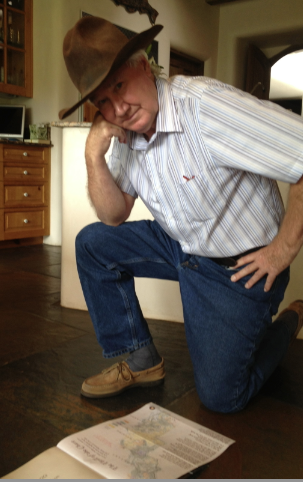 Some of the emails Fenn receives make him chuckle. A New Mexico archaeologist wanted to know if he had made an environmental impact study before he "dug a big hole and buried the gold vault." NYC cops caught a guy digging in Central Park near the Alice in Wonderland sculpture because he'd heard that Fenn could quote from Lewis Carroll's book. Another enterprising searcher asked that if his old truck broke down in the mountains, would Fenn come and take him the rest of the way to the treasure?

Fenn said that 32 women have emailed wanting to marry him. He grinned while telling me he usually writes back and asks if they have an airplane. Of course he's only joking because Fenn has been in love with his bride, Peggy, for 60 years. I asked Peggy if she knows where the treasure chest is hidden, and she said, "No, I've never asked because I know he wouldn't tell me."

And what does Fenn have to say about all the publicity and commotion his hidden treasure story has generated? He replied, "I've never said what I though the treasure is worth because I don't know, but writers keep upping its worth. When the value gets to $10 million I'm going back to get it."