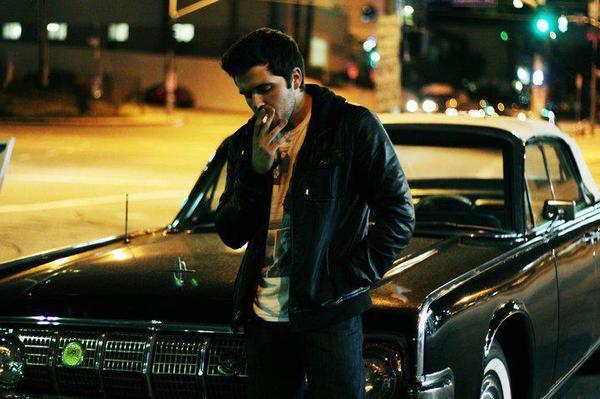 When I first met Rod Melancon -- a little over a year ago at roadhouse Pappy and Harriet's in the high desert -- I thought, "What's this good-looking kid doing trekking all the way out to the alien-planet Joshua trees to see Mike Stinson?" Was there some commercial he was filming nearby? He was quiet. He hid underneath his dark overhang of hair. He respectfully listened and cheered.

A week later I put two and two together when I saw he was playing the back porch at the Grand Ole Echo -- LA's weekly Americana show as community celebration. I believe he had a guitar, but I didn't much notice. What I noticed was that he was singing.

Rod Melancon's deep rumble of a voice sounds as tumbled as Waylon Jennings, as if it came of age on a gravel road after a childhood in the desert (though he's from hurricane-soaked Louisiana), as if he's done a lot more living and soul steeping than you'd ever know -- and he's only 22 years old.

When I heard him, I found myself fighting his good looks, the dark James Dean pout, the stormy eyes -- how could anyone so striking know the troubles he sounds like he's seen? I walked closer... this has got to be good.

Rod's first CD, My Family Name, likewise draws you in. Like a great log-line of a must-see movie, each song makes you want to know the rest of the story. He drops you in the middle of a full-on saga. 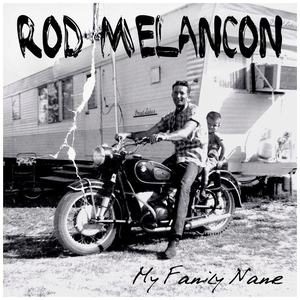 If he sung just another verse, I'd maybe really understand. Rod wants to tell you, if only he could trust you. He'll give you a couple of scenes, but you'll have to take it from there. It feels like he's saying, "You know, we don't understand one another -- we're just guessing most the time -- but we keep guessing."

A lot is left to Rod's voice itself to communicate, in the rumbles, the catches, the vulnerability. The instruments -- as excellent a setting as the roster of star players provide on these recordings (with luminaries Chad Watson, Dean Parks, Don Heffington, Vern Monnett, Herb Pedersen, Matt Cartsonis and Richard Barron) -- are surprisingly incidental. "By Her Side," Rod's concluding a cappella track of the CD, is an astonishing dual shot of loneliness and love gone by in a mere one minute forty five. Yup, a cappella is all we need.

Though his songs' story lines could come straight out of a Gulf-Coast Justified, I gather Rod must have been a misfit in laissez-les-bons-temps-rouler Louisiana. The world seems a painful place for Rod. But I also gather the pain is not so much his own. What he feels is the ache in others: their confusion or regret, their inability to sort crap out in time to stop some unspoken tragedy.

It's a weight we all carry somewhere -- not being able to sort crap out in time.

Rod taps in and turns it into songs.

I confirm some of my theories in a recent conversation with him:

RM: "Most of these songs I wrote living on Beachwood Canyon. I had a living room and the top of a bunk bed. I couldn't write songs in front of my roommate, so most of these songs I wrote in the middle of the night -- 3 a.m. -- in the hall by the bathroom. There were beer cans everywhere. My roommate had a tiny little dog -- a post-apocalyptic deer -- and it was always peeing on my lyrics sheet.

"Now I actually have a bedroom.

"'Long Lost Friend' was inspired by this homeless family I would see -- they had two grocery carts and were scavenging around. The kid would be in one of the grocery carts... There's a line about heaven, I wondered whether they believe in an afterlife, an end to the struggle.

"A lot of families struggle. I was thinking about a lot of people back home who work their asses off -- my dad was on the road three days a week working for us -- especially the man of the house, working to provide for his family. He feels like it's not enough sometimes, being gone all the time, disconnected from the family because of it. I saw a lot of that growing up -- men gone for months on end on the oil fields.

"I want to touch people to feel something -- art does that. I'm a sucker for those sad songs. In movies, that's what I always like. My mom's a theater teacher -- I saw Tennessee Williams as a kid. I wanted to be a playwright. I see characters. I suppose my songs are like that, fragments of a character's life.

"The album cover is a pic of my grandfather and the little boy is my uncle Rod, who died in '74. My grandpa is why I play music. I got him the CD of [the music from Peter Bogdanovich's film] The Last Picture Show one Christmas, the same Christmas I got my guitar. I saw him listen to Hank Williams in the corner of the room... that was the moment for me. I wanted to try and write something that affects someone like that. If it wasn't for him...

"My grandpa is still alive. He's showing the album cover to all his old buddies that he drinks coffee with every morning.

"The town I went to school in was Kaplan, Louisiana. It's a farming community -- mainly rice fields, and sugar cane. There was a crawfish pond that we used to farm. I never farmed myself though. I grew up not really understanding it. There, you can't really talk about the symbolism in A Street Car Named Desire with your friends. All they'd talk about was WCW... (wrestling).

"I still love all those people there. I knew I was a little different -- not that I'm better. I remember being frustrated by it all. I learned when I moved away to appreciate it. All of the family are still there -- dad is the Cajun side. I miss it every now and then, the people and the way it looks. I don't miss the politics.

"I never was interested in writing songs. As a teenager I wanted to be an actor -- Stanislavski, Strasberg, the Method -- then you move out here and that all gets blown out the window. A lot of casting directors don't care. But I'm a huge movie buff, theater.

"All the characters I've ever wanted to play I was able to write about in songs. I learned enough chords and wanted to write my own stories. All of the songs have personal touches -- maybe exaggerated, but it comes from something that was true.

"That's how I wrote 'South Louisian'' ... it's based on something that happened back home, before I was born. Every weekend this group of kids would drive by and dump trash in this family's yard. One time they drove by as usual and one of the family members was waiting outside with a shotgun. He shot two of them.

"'Reggie' was inspired by friends that fought in Iraq. It's about two childhood friends who are starting to lose it a bit -- war's taking a toll. The only thing that makes one of them feel okay is thinking about sitting on his pa's lap. It's a tragedy -- the military targets poor towns, tells the kids, 'Hey, you want to be part of something special?' Next thing you know, they're dead. Some kids I played little league with went to the war. They lost something there -- the person that comes back isn't the person I grew up with. That's a sad thing! Someone should tell Toby Keith that.

"'Love Without Pain' also was inspired by a friend -- she said all that's in the song. I thought, 'Holy shit this is disturbing' -- the vicious cycle of being in an abusive relationship. It's so sad to see that -- maybe this song will inspire someone to get out of one.

"'By Her Side' -- to do it a cappella was Richard Barron's idea. I was scared shitless -- "Are you serious?" He said do it like a lonesome guy singing in the canyon. Pretty brilliant idea. I wrote it about the man who lived across the street from us in Louisiana. He had a wife who was ill -- I don't remember ever seeing her walk. He had a crop duster and I'd always see him fly it. I'd hang out with him a lot and talk about movies -- he'd met Paul Newman in a gym once. Sweet people. One time I was home visiting, he asked me to come by and I never made it over. For some stupid reason I didn't walk across the street. After I left, he passed away. I felt so bad about that -- messed me up for a while. Since I did that song, I feel a lot better. I felt really guilty about it, but I guess I've found some peace about the situation. Songs can be capable of things like that."

Rod Melancon's CD comes out digitally June 5 on iTunes and "all those things." He performs at the Grand Ole Echo main stage on July 15.