WASHINGTON (AP)- In the midst of his battle with the titans of Wall Street, President Barack Obama was nearly upstaged by a rodent. Obama had just begun a Rose Garden statement lauding the end of a Senate filibuster on his financial overhaul when some kind of rodent dashed out of the bushes to his right, just outside the Oval Office.

As photographers snapped away in the sun-drenched garden, the critter scurried straight past the gray podium with the presidential seal and made a bee-line for another set of bushes to Obama's left.

It's not clear if the president could even see the streaker, but he didn't show any reaction. And he concluded his statement minutes later, returning to his office without answering a few shouted questions on other topics.

Once he was safely inside the Oval Office, a fierce debate erupted among the photographers and reporters who'd witnessed the dash. Was it a rat or a mouse? Or maybe a mole, or some other kind of related creature.

Before long, experts had joined the fray.

"I would partially rule out rat," said Russell Link, a wildlife biologist who works for the Washington State Department of Fish and Wildlife. "That's due to the lack of a tail that is typically equal to body length."

After viewing a photograph of the surprising scurry, Link said, "My suspicion is it's a vole, commonly called a 'meadow mouse' out our way."

In fact, this wasn't the first time a rodent's been spied in the White House, or even the Rose Garden.

Just last week, as camera crews set up for an Obama statement on the Gulf oil spill, what's believed to have been the same rodent made a dash across the famous garden.

The press work areas behind the White House briefing room have had at least one rat sighting, though that was before a multimillion-dollar rehab project finished by the Bush administration.

Moreover, rodents of all kinds are pretty common in Washington. From time to time, city officials issue alarms about surges in the rat population when residents put out extra-big summer piles of garbage.

Washington is, after all built, along a river, on what used to be a malarial swamp. 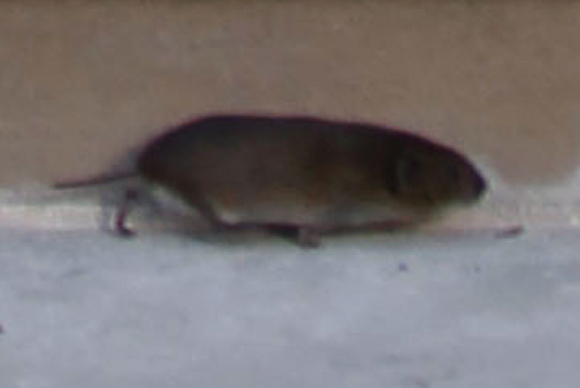 T.J. Ortenzi is an associate news editor at The Huffington Post.