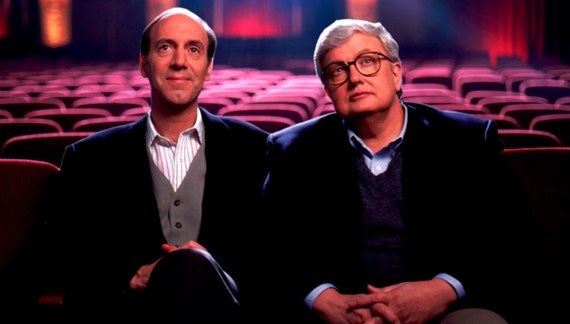 I don't like this. I don't like writing reflection pieces after someone passes away. Especially someone whose death -- even though I didn't know him or her personally -- makes me incredibly sad, the way this one does. When it comes to writing a reflection piece on Roger Ebert, I'd like the luxury of a few weeks to reflect, to tell the truth. Though, without that luxury, the first thing that comes to mind is his review of the movie Short Circuit 2, of all goddamned things.

I never wanted to write about film for a living. I'm not one of those many, many, many people who will write -- truthfully -- that Roger Ebert inspired them to follow their dreams of writing about film. (To be fair, growing up in Missouri, I never knew that "writing about film for a living" was an actual option.) What Roger Ebert did do for me was make me want to watch the television show he co-hosted with Gene Siskel every week. Every week.

For better or worse, Missouri doesn't always instill what you might call "refined tastes" in the children who grow up there. And Roger Ebert, as smart as he was and as refined as his tastes were, never turned up his nose at the middlebrow. It's impressive to have a vast knowledge of film. It's even more impressive to not be a snob about it. Roger Ebert wasn't a snob. I watched Ebert, and later read him, because he never made me feel stupid. I loved Roger Ebert because he never made me feel stupid.

I never wanted to be a film writer, but, through a series of strange events, I am a film writer. Flying by the seat of my pants when I first started (OK, probably still), I was influenced by no one more than Ebert -- not his writing style, because no one could duplicate that, but by his courage to own the things he liked. I like Star Wars. Ebert liked Star Wars. In fact, Ebert and Gene Siskel appeared on Nightline to defend Star Wars against their fellow critic John Simon. (I have nothing against John Simon, whose career as a critic is about as impressive as they come -- but Simon was the kind of guy who made kids like me growing up in Missouri feel stupid.)

No one has successfully launched a film-review television series since Siskel & Ebert. I think that's because all who have tried have made the audience feel stupid in one of two ways -- either by being too knowledgeable, in a way that's alienating, or by being not knowledgeable enough, in a way that makes you think, Why am I watching this?

Roger Ebert and Gene Siskel were incredibly knowledgeable, but they somehow made you and me feel like we were on an equal plane with them. I will forever miss that.

(And, yes, they fought. Which could be entertaining. But I was the weirdo who was always happier when they agreed on things, because I sincerely liked both of them.)

Roger Ebert is gone. An inspiration for an overwhelming percentage of film writers today is gone. In the opening paragraph of this piece, I lamented not having a few weeks to reflect. But even if deadlines stopped me from doing that today, I will spend a long, long time thinking about his legacy.