I'm still in a state of shock over the news of Roger Ebert's death, at age 70, so soon after going public about the recurrence of cancer in his system -- and promising to file reviews as often as possible. That's the Roger Ebert I'm thinking about right now: not the influential critic or the lifelong newspaperman who never missed a deadline, but the guy who faced a staggering series of health crises and refused to give in. He was the bravest person I've ever encountered. It helped that he had an equally indomitable partner in his devoted wife Chaz; they made a great team. 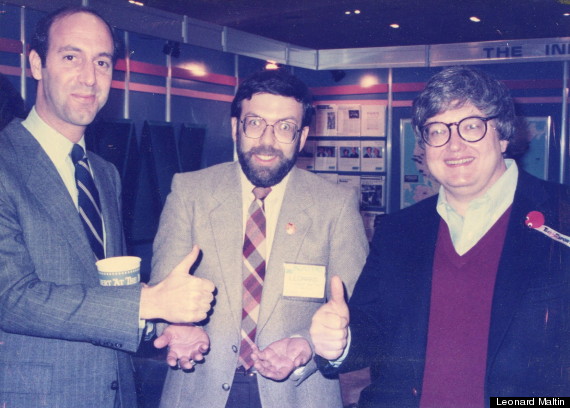 It's impossible to overstate the impact Roger and his longtime partner and rival Gene Siskel had on popular culture and the perception of film criticism. They were both firmly established in Chicago (a great newspaper town), writing for the Sun-Times and the Tribune, respectively, when their local public television affiliate exposed them to a national audience on PBS in the early 1980s. Imagine: a weekly half-hour program consisting of two critics reviewing and debating current movies. There had never been anything like it before and it caught on like wildfire. Gene and Roger were in the right place at the right time, and they made the most of it; they became bona fide celebrities, and soon their names were synonymous with film criticism. (I know this first-hand, because Entertainment Tonight went on the air around the same time. When people started recognizing me in hotel lobbies and airports, they would often ask, "Aren't you Siskelandebert?", as if it were a compound name.)

There was a reality show element to their program, long before reality television took root: people loved to watch them argue and fire potshots at each other. The sniping was genuine, and not always benign...but so was their chemistry, which no one was ever able to re-create, including Roger. But at the heart of their show was an absolute passion for film; they really cared about the movies they championed, and their endorsement helped boost the profile of innumerable films.

If there was any downside to their television success, it was that so many people only knew them from that medium and never sought out their printed reviews. I was one of those people. It was only with the invention of the Internet that I began reading Roger's reviews on his comprehensive website, www.rogerebert.com, and marveling at his writing skill. He is the only critic I know who unashamedly drew on his life experiences to explain his feelings about a given movie. It wasn't a gimmick, and it never made him seem self-absorbed, just disarmingly candid.

I also admired his productivity. Calling him a workaholic is too glib, and imprecise. I believe it was his old-school upbringing in the world of journalism that imbued him with his unyielding work ethic: it had to do with making deadlines, expressing his opinions, and serving his readers. When he suffered the first of his health setbacks, the notion that he might have to miss some films bothered him terribly.

Little did he know what problems lay ahead. Yet he never complained, at least publicly, and never lost his enthusiasm for writing. Instead he embraced the new social media and became a fervent twitterer, as if to compensate for the loss of his voice by writing even more.

The role of critics has been marginalized by the growth of the Internet and the empowerment of self-made bloggers who are eager to share their opinions. But few, if any, of these wannabes will ever surpass Roger Ebert as an essayist, and I doubt that anyone will ever have the enormous impact he and Gene Siskel had on the moviegoing public.

My family and I send our loving thoughts to Chaz Ebert at this sorrowful time.