The prevailing view of modern capitalism holds that corporations naturally behave, like water flowing downhill, in ways that produce insufficiently inclusive outcomes. Proponents of inclusive capitalism want corporations to behave differently. This is, they argue, a tough task because it necessitates the moral equivalent of making water flow uphill.

By contrast, I would argue that this dominant frame - accepted alike by proponents and opponents - is an artificial construct that, rather than illuminating the challenge, actually represents a barrier to the flourishing of inclusive capitalism. It needs to be exposed for what it is and replaced by a better theory.

Two pieces of research and writing help provide a more useful frame: the first is the work of the late Sumantra Ghoshal on selffulfilling prophecies in management theory; and the second is my own work on integrative thinking. Together these bodies of work suggest that it is within our control to generate a self-fulfilling frame in which inclusive capitalism switches from being like water flowing uphill to water flowing downhill.

Self-fulfilling prophecies
In 2005, a year after Sumantra Ghoshal's sudden death of a brain hemorrhage, the Academy of Management Learning & Education published his manuscript Bad Management Theories are Destroying Good Management Practices. Ghoshal argued that - unlike in the hard sciences - in the social sciences, theories actually influence the behaviour of actors in ways that can cause the theory to become a self-fulfilling prophecy. This can be true even if the theory actually had no particular validity in the first place.

For example, if the prevailing theory in an industry is that consumers won't pay extra for quality, producers will not invest in enhancing quality. Any observer who studies that industry will come to the conclusion that consumers definitively don't pay for quality (better quality is not, in this case, available). This, in turn, reinforces the belief that the theory was right in the first place, whether in fact it was or was not.

In management studies, in particular, Ghoshal argued that the academic field has been taken over by theories that embody a 'gloomy vision' of human behaviour, a description he borrowed from Albert Hirschman. More specifically still, these are theories rooted in the discipline of economics, which preaches that the core managerial function is one of making trade-offs between desirable but incommensurable goals. Economics students regularly start by learning about the trade-off an economy needs to make between guns and butter.

As those who graduate from the management schools that teach this theory flow out into the business world, they see their jobs as making - and justifying the making of - unpleasant trade-offs.

Central among these trade-offs is the one between shareholder value maximization and benefiting society. According to Ghoshal, the very fact that they believe in the validity of this theory ensures that they spend their careers making, and justifying the making of, unpleasant trade-offs. As a result, anyone observing the trade-off activities will conclude that this is what business life is all about: making unpleasant trade-offs.

That makes the task of promoting inclusive capitalism one of convincing managers to make an unpleasant trade-off, promoting inclusive capitalism at the expense of shareholder value maximization - a tough task.
It is time to recognise that this is an artificial construct, the product of bad theory and the self-fulfilling prophecy that arises out of it, rather than being a reflection of a real-world dilemma.

Integrative thinking
My study of how highly successful leaders think, published in 2007 in The Opposable Mind, argued that when facing what appears to be an unpleasant trade-off between incommensurable options, there is always, in fact, another alternative to choosing one at the expense of the other. Successful leaders seek out a creative resolution of the tension between the opposing models by generating a solution that contains elements of each, but is superior to both.

The main thing that stops executives from seeking a creative resolution is their belief that life is inherently full of difficult such trade-offs and that the only course of action is, therefore, to make a difficult choice. This is, of course, what Ghoshal would have predicted. The prevailing economics-based theory of trade-offs creates a self-fulfilling prophecy so that making the trade-off is the dominant response. This simply reinforces the perception that making the either/or choice is the optimal behaviour in response to an apparent trade-off.

My research on successful leaders demonstrates that the trade-off isn't inherent and binding. It is constructed, yet it too easily becomes a self-fulfilling prophecy.

The framing of this issue represents a case of bad management that lacks initial validity but gains credibility through reinforcement because managers act on it, believing it to be true.

Implications for inclusive capitalism
It is unhelpful to promote the existence of a trade-off between shareholder value maximization and benefit to society, and then plead with managers to trade the former off for the latter. This simply entrenches the self-fulfilling prophecy and makes it harder to dispel. Instead, proponents of inclusive capitalism should argue that the trade-off is not inherent; it is a product of the model in people's heads. The core task of management is not to choose between shareholder value maximization and benefit to society; it is to seek creative resolutions that enhance both. Long-established companies such as Unilever or Lego have shown that this can be done. Newer companies, like Google, are also demonstrating that a business can grow to large scale without having to revert to making these trade-offs. And start-ups such as Toms Shoes and Warby Parker can actually attribute their success centrally to doing both.

Of course, opponents of inclusive capitalism will point out that it is impossible to wish away all trade-offs and that at the margin - being economists, that is where they will go - there are always trade-offs. Indeed they are correct: there are and always will be trade-offs. But there is a difference between assuming that every situation necessarily involves an unpleasant trade-off between shareholder value maximization and societal benefit, and accepting that after much work to come up with a creative resolution of that tension and the failure to find such a resolution, a trade-off needs to be made.

The former world is one in which the 'gloomy vision' begets a gloomy result and the belief that gloominess is the natural order of things. The latter world is one in which hope and imagination are continually improving the world and there is a belief that improvement is the natural order of things. By heeding Ghoshal's warning and engaging in integrative thinking, inclusive capitalism can and will triumph.

The good news on this front is that integrative thinking can be taught - to executives, to graduate students, to undergraduate students and even K-12 students. I started with executives and with the help of my colleagues have moved down the age scale to elementary school students. Our experience is that anyone willing to try to learn integrative thinking most certainly can and does.

It will take some time for the students flowing out of the formal educational system to transform the business world. We are fortunate, though, that in this world, success can breed success. As the achievements of integrative thinkers become more obvious, there will be the kind of productive copy-catting that always goes on in business. In this way we can make the water start to flow productively downhill: inclusive capitalism will be the result. 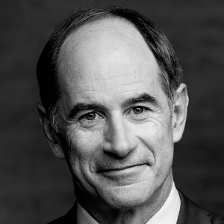 Find out more at http://www.inc-cap.com/