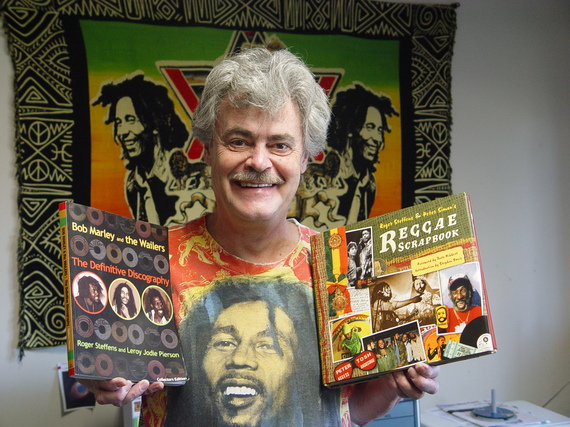 If you know anything about the world of reggae music, you know the name, Roger Steffens, the man who began the first radio broadcast of the "Reggae Beat" on KCRW (along with Hank Holmes) on Oct. 7, 1979. It was the only reggae show in Los Angeles at the time, and it went on to set annual fundraising records for the radio station, L.A.'s local NPR affiliate, which is still going strong.

Eventually "Reggae Beat" was syndicated to 130 stations worldwide. Steffens first guest on the show was Bob Marley, and Steffens spent two weeks on the road with Marley in 1979 on the original "Survival" tour. Since then, Steffens has written six books about Marley and the history of reggae, and he has lectured internationally for the past 31 years on "The Life of Bob Marley," in a multi-media presentation that has been seen everywhere from the bottom of the Grand Canyon, to the Smithsonian to the outback of Australia. I saw the show twice, once at Steffens reggae exhibition installed on the Queen Mary in Long Beach, a second time, more recently, at USC' s School of Cinematic Arts. Roger spoke while his wife, Mary, ran the slides and videos. 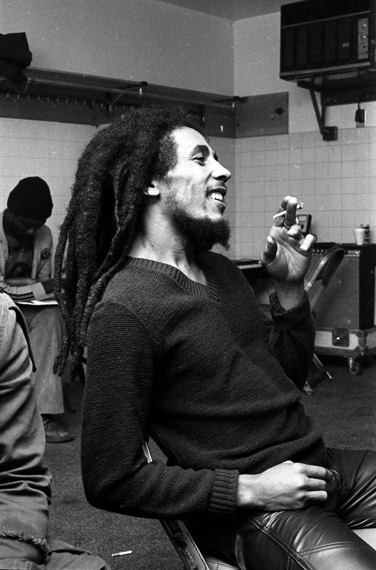 Steffens' world-famous reggae archives are housed in a labyrinthine maze below the first floor of his home in Echo Park, filling the entire lower level of seven rooms from floor to ceiling. "We've had to move twice just to house the collection," he told me. "And now we're about to burst this one too. We need a permanent institutional home, just in case you know of one."

His Marley collection has been called the most complete in the world, by the very Wailers themselves, Bob's band members. It's not just shelves of records, tapes, and CDs pushing out from every corner, but tens of thousands of reggae photographs, 30,000 reggae fliers from all over the world, 2,000 reggae posters (many of them signed by the original artists), 140 cubic feet of alphabetized clippings, and an array of invaluable books and magazines, including the full 48-year run of Rolling Stone. (He bought the first issue the day before he went to Vietnam.) 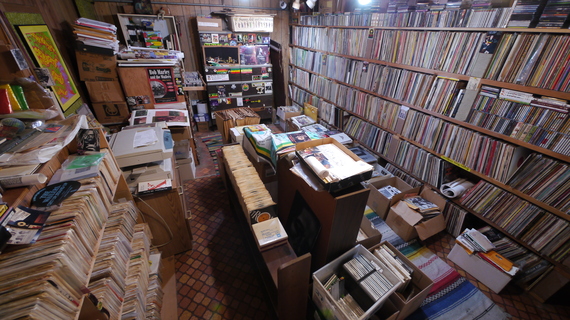 Keith Richards has been there, along with a long list of other Hollywood and rock 'n roll celebrities. Each room in the archive has its own sobriquet. First there is the Reggae Reception Chamber, followed by Reggae Central, which is the main work room, and is always in media res.

The Reggae Vault contains treasures like the envelope signed by Haile Selassie and postmarked at the United Nations on the day Selassie gave the "War" speech which Marley memorably set to music on his famous "Exodus" album (which Time Magazine called "The Album of the Century"). Beside the envelope usually sits a poster signed by Marley and 39 of those closest to him: family, band members, co-workers and relatives. It is currently on loan to the Grammy Museum, insured for $75,000. 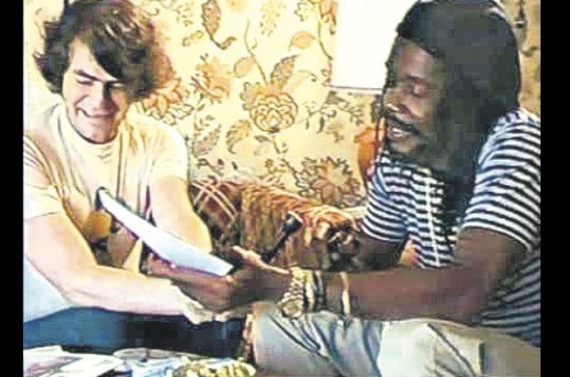 Yet Steffens is not only a reggae "encyclopedist" and collector. He has also hosted programs of African music, poetry, the Sixties, and a wide-open talk show, called "Offbeat." He has interviewed countless colorful musicians, and he is the man who turned Paul Simon on the Ladysmith Black Mambazo for his landmark and Grammy-winning 1986 "Graceland" LP. Steffens was the first speaker at the Rock and Roll Hall of Fame and Museum, and the most frequent, nine times. In 2013 he spent the first two months of the year on the road as the Wailers' opening act on their international "Survival Revival" tour. 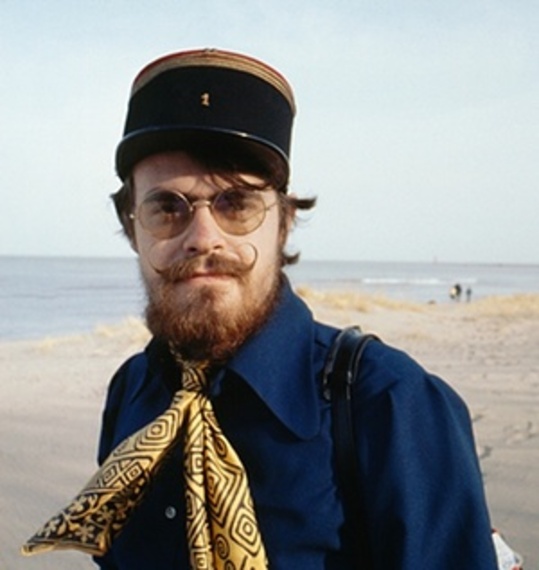 Where is the reggae guru from? What's his story? Well, Steffens, who was born in Brooklyn in the early Forties, likes to begin his story of influence with serving for the last 26 months of the Sixties in the army in Vietnam. He was assigned to Psychological Operations in Saigon, but when the TET Offensive hit the capital, Roger found 52 families living in sewer pipes outside his barracks. He began a refugee campaign that raised over 100 tons of food and clothing, mainly from Racine, where he had read poetry in the school before being drafted. He built villages and brought medical and dental assistance to war victims from the DMZ to the Mekong Delta. For his actions, he was awarded a Bronze Star. 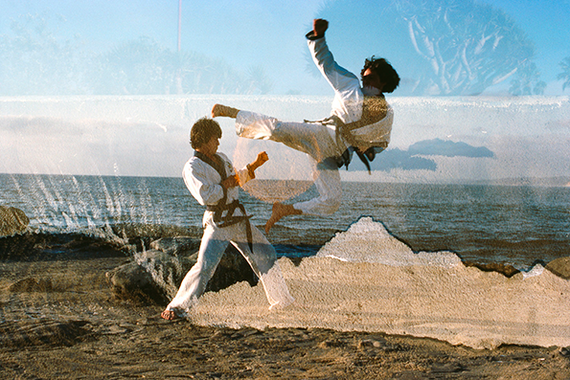 "I've always had a Hippie heart," Steffens says proudly. And after a post-war 'we gotta get out of this place' year in Marrakech, Morocco in 1971, he moved to Berkeley, California. He photographed his activities hanging with early Rolling Stone writers, musicians, artists, poets, painters, and fellow actors, as avidly as he had taken photos during the Vietnam War. Since that time, all the slides (1967-1993) and prints (1993-2007) stayed hidden behind closed doors -- 100,000 images that virtually no one outside the family had ever seen, except in living room slideshows. (He's taken another 240,000 digital images since.)

Then, in 2013, Roger's son, Devon Steffens, spent a year digitizing some 40,000 slides. Next, his daughter, Kate, asked, "Why don't I start an Instagram site?" Right on cue, Steffens replied, "What's an Instagram?" After his daughter explained and her dad agreed, she began posting two pictures a day under the rubric "The Family Acid," so called, she said, because her childhood friends told her that her family was "like the Waltons on Acid." The fact that Roger and his wife, Mary, met on an acid trip in a pygmy forest in Mendocino under a total eclipse of the moon on Memorial Day, 1975, may have also helped influence the title. 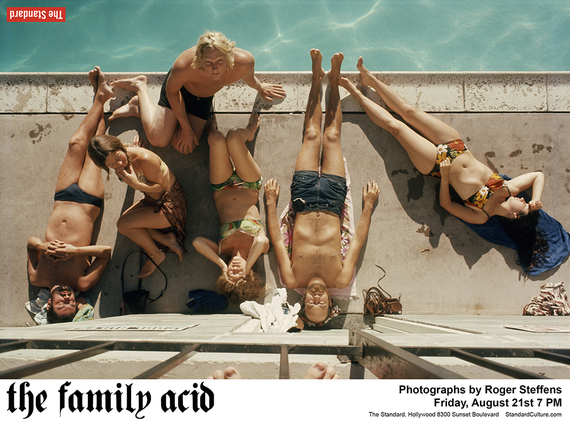 After slowly building a following for the first year, around 1,000 people, Time Magazine wrote an online feature about it, which was followed by a glowing piece in Slate. In December, 2014, the New Yorker asked them to "take over" their site for a week, posting 28 shots, and within weeks, the magazine announced the site as its most popular takeover ever. Two months earlier a group of artists in New York City, called S-U-N Booksm, offered to compile a book of Steffens' photos. It was published at the end of January, just in time for the MOCA Art Book Fair in L.A. Concurrent articles appeared in the New York Times "Sunday Style" section and The Guardian in England. A feature on the BBC World News brought response from all over the world.

"Candid shots of one of the most captivating lives in American history." BBC-tv World News

"The Family Acid captures the spirit of California in the Seventies better than any photo book I've ever seen. Steffens is a sort of the Zelig figure of the period. " - Blake Andrews, photo-eye blog

"The Family Acid presents Steffens' often transcendent vision and life as a psychedelic pioneer on the order of Timothy Leary and Hunter S. Thompson, coalescing into a body of work that both parallels and defines the countercultural ethos of Steffens' generation." - theblogazine.com 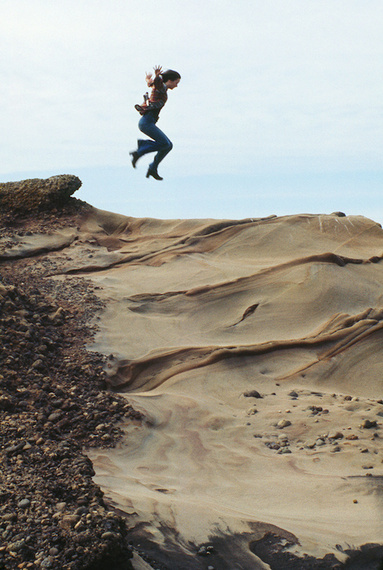 Steffens' photographs have since been shown at Paris Photo L.A. and at Art Basel. He also recently signed with the highly-respected Benrubi Gallery in New York City, which will mount an exhibit for him next year. Also up for 2016 is one of the initial exhibits at the reopened Museum of Neon Art in Glendale, Calif., featuring his recent psychedelic series, "Dancing with Light," created in conjunction with world-famous neon artist Brian Coleman. 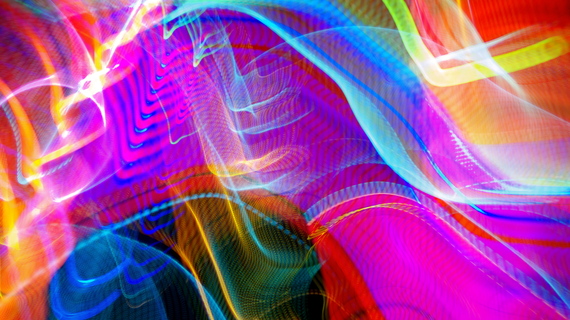 On Friday, August 21, from 7-9 pm, in the lobby of The Standard Hotel on the Sunset Strip in Los Angeles, Steffens will have a small exhibit titled "California Summer" on display. An opening party, free to the public, will be held, and some of the final remaining copies of his book, "The Family Acid," will be available.

Here is a great YouTube link on Steffens' reggae archives. And a lovely Vimeo piece about him and his wife, Mary. And a link to "The Family Acid." 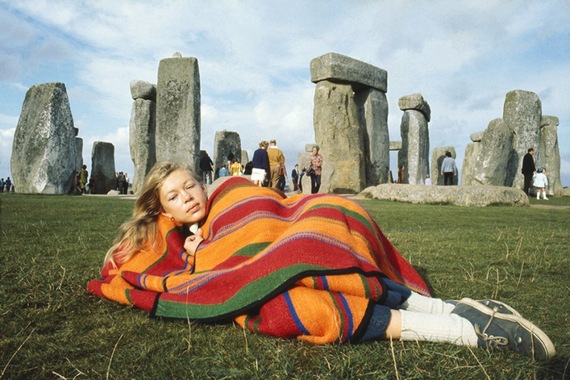 Follow "Trules Rules" on his WordPress blog. And travel the world with his "e-travels with. e. trules" blog.

All photos courtesy of Roger Steffens.