Roger Waters called for a boycott of Israel earlier this year, and now the former Pink Floyd singer-bassist is defending his The Wall Live Tour from accusations of anti-semitism in a Facebook post, titled "An open letter from Roger Waters." Waters begins the letter by explaining the recent controversy that erupted after a performance in Belgium last week: An Israeli man alerted a news source with video footage of a Star of David-marked prop pig that was featured in the show and destroyed by the audience at the end of the performance.

LINK: Rolling Stone’s List of the 100 Greatest Artists Of All Time: Pink Floyd

The story gained traction and was picked up by Jewish newspaper The Algemeiner. Rabbi Abraham Cooper, Dean of the Simon Wiesenthal Center, told The Algemeiner that Waters "is an open hater of Jews" and urged other artists to "denounce his anti-Semitism and bigotry." In his Facebook post, Waters calls Cooper's words "wild and bigoted" with an "entirely predictable resulting rant."

LINK: Rolling Stone’s List of the 500 Greatest Albums Of All Time: ‘The Wall’

Waters first criticizes Cooper's use of "anti-Semitic," saying the Anti-Defamation League has ruled his work has no anti-Semitic intent. "I also use the Crucifix, the Crescent and Star, the Hammer and Sickle, the Shell Oil Logo and The McDonald's Sign, a Dollar Sign and a Mercedes sign [in the show]," writes Waters.

Waters then defends himself from Cooper's claims of Jew-hating by noting that he himself has close Jewish friends, including Wiesenthal's nephew, and a Jewish daughter-in-law. "[She] is Jewish and so, in consequence, I'm told, are [my grandsons]," he writes.

LINK: Rolling Stone’s List of the 500 Greatest Songs of All Time: ‘Comfortably Numb’

Waters' third and final point addresses Cooper's use of the word "Nazi." Waters points to his father, who died fighting for Britain in Italy during World War II, and his upbringing in post-war England. "I received the most thorough education on the subject of Nazism and where I was spared no horrific detail of the heinous crimes committed in the name of that most foul ideology," writes Waters, also pointing to his mother's political involvement. "I for my part, as best I can, have continued along my parent's path," Waters continues. "At the age of nearly 70, in the spirit of my Father and Mother and all they did, I have stood my ground, as best I can, in defense of Mistress Liberty."

LINK: In Photos: The Dark Side of Pink Floyd

Waters closes by targeting Israeli policies. "In a functioning theocracy it is almost inevitable that the symbol of the religion becomes confused with the symbol of the state, in this case the State of Israel, a state that operates Apartheid both within its own borders and also in the territories it has occupied and colonized since 1967," he writes. "The Star of David represents Israel and its policies and is legitimately subject to any and all forms of non violent protest. To peacefully protest against Israel’s racist domestic and foreign policies is NOT ANTI-SEMITIC."

Waters also notes that the pig, which has been used in his show since September 2010, represents "evil, and more specifically the evil of errant government." His next show on The Wall Live tour is set for August 4th in Istanbul, Turkey. 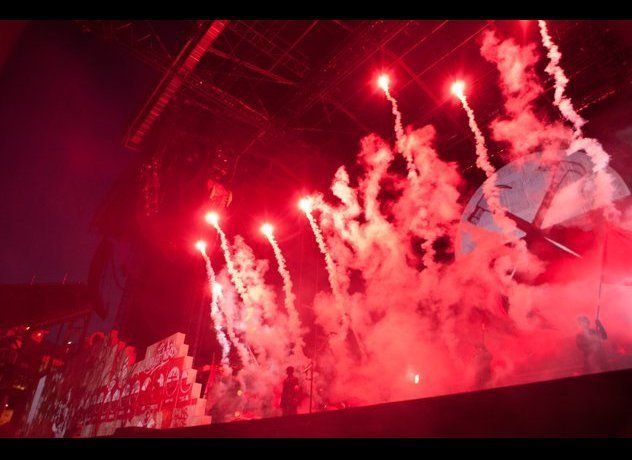