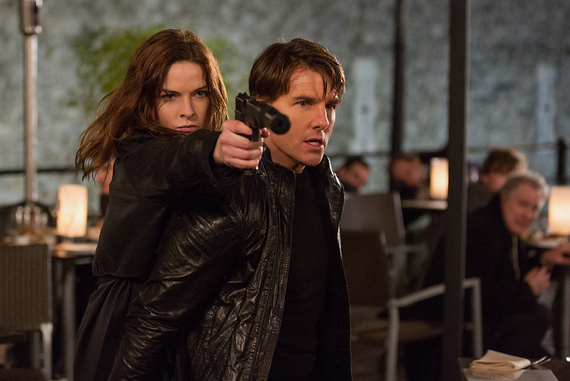 Your mission, should you choose to accept it: name a Hollywood action movie that doesn't contain a kiss.

And yet that's the most subtle stunt Mission: Impossible-Rogue Nation pulls off.

Following the film's slew of acrobatic feats and chase scenes, the hero doesn't get the girl in the end. Against a fist-pumping musical score, there's a gaping silence: no smooch. No sound of lips locking between hero and love interest to bring about the intimate closure audiences expect.

Ethan Hunt (Tom Cruise) isn't exactly a womanizing Bond, but these days, any blockbuster movie that waives the routine kiss would seem to accomplish, well, the impossible.

Hunt, in his pursuit of terrorist Solomon Lane (Sean Harris), meets the inscrutable Ilsa Faust (Rebecca Ferguson). As rogue agents, Hunt and Faust engage in a deadly tango, alternately aiding and betraying each other as they seek their own ways of taking down a global crime syndicate. Plenty of chemistry bubbles up between these leads, but the romance never reaches full boil.

Perhaps the answer lies in five seconds of complete silence. It's a crucial scene: Hunt and Faust sit outdoors on a restaurant patio as Lane's armed henchmen close in from all sides. Time is running out. But instead of amping up this tension with fanfares, composer Joe Kraemer offers a sonic gap. Zero music, zero sound effects, zero dialogue (and in my theater, dead silence as viewers held their breaths). For a film score otherwise loaded with soaring strings and bombastic brass, an audience may even have reason to think the audio is malfunctioning.

In this moment of silence, Hunt and Faust stare into each other's eyes, shot-reverse-shot, telepathically planning the next few seconds. Trust is the key to their survival.

Then the soundtrack revs up again, punctuated by the rat-tat-tat of bullets. Miraculously, both Hunt and Faust make it out alive.

With the plot zipping along at breakneck speed, Hunt and Faust swap few sentimental words throughout the film. But at three other moments in the film, Kraemer cleverly fills in the gaps with a musical device: a melodic motif from Giacomo Puccini's Turandot, the opera that Hunt and Faust both attend in Vienna early in the movie. 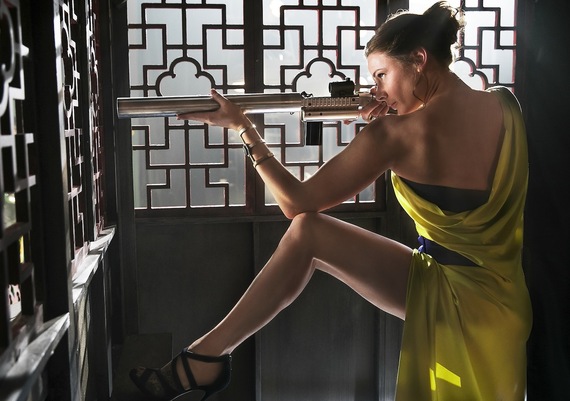 Hunt goes to the opera house on his suspicion that Lane would try to assassinate the Austrian Chancellor during the performance. And here director Christopher McQuarrie plays up a trope found in many movies and video games: the spectacle of the opera house showdown where heroes and villains run around backstage and over the rafters, duking it out to the melodramatic lyricism of this highbrow genre. (A staging of Puccini's Tosca, for example, appears in the 2008 Bond film Quantum of Solace as well as the 2006 PC game Hitman: Blood Money.) But McQuarrie does more than just call upon the trope. He turns Rogue Nation into a modern-day opera. Like Turandot, the film presents executions, torture, Sphinxish riddles, comic foils, hidden identities, ample plot twists, and big musical scores.

The film's Turandot scene predictably includes one of the most famous arias in the operatic canon: "Nessun Dorma," sung by the character Calaf. (Just this week, 12-year-old Arielle Baril performed the aria on America's Got Talent).

Nearly an hour after Rogue Nation's opera house scene, an instrumental reprise of "Nessun Dorma" flutters out of Kraemer's score. And like the startling silence in the middle of the film, it lasts only a couple of seconds. But the moment is a critical juncture for Faust, who, in a one-on-one conversation with Hunt, gives the hero three options for going forward. The first two involve plans to stop Lane's terrorist agenda. And the third? "Come away with me," whispers Faust, in a rare moment of vulnerability. Hunt looks taken back. For all his do-gooder instincts, he appears to contemplate seriously leaving all the calamity behind and running away with this beautiful woman sitting across from him. Cue the "Nessun Dorma" melody.

Kraemer's not quite done with his operatic shout-outs. We hear this aria one final time toward the end of the film, and it's precisely at the moment when everyone in the audience would expect Hunt and Faust to kiss. But they don't. Instead, they embrace each other in a hug that lingers ever so slightly, and the soundtrack embraces both characters with a warm French-horn iteration of "Nessun Dorma."

When Calaf sings this aria in Turandot, he professes his willingness, out of love, to place his fate in the hands of the icy Princess Turandot, who has shown more than once that she doesn't hesitate to behead her suitors. The trust pays off: Turandot spares (and falls for) him. In Rogue Nation, trust is similarly the principal hurdle for Hunt and Faust. The film's twists and turns reveal that the currency of trust can be as valuable as romance or lust or love, not least when you're an undercover agent hounded by terrorists. And this trust doesn't take a kiss to prove.

So while Hunt doesn't get the girl, he gets her. And she gets him. They understand each other.

Altogether, the characters, narrative, and music of Rogue Nation remind viewers that trust can sometimes feel impossible, especially without traditional gestures of intimacy (say, a kiss) or explicit words of affirmation.

Outside the "Nessun Dorma" moments, there's one scene in Rogue Nation that sums up its powerful motif of trust. Midway through the film, agents William Brandt (Jeremy Renner) and Luther Stickell (Ving Rhames) pore over Hunt's pencil sketches of two persons of interest: one of villain Lane, the other of Faust. Stickell squints at the sketches and tells Brandt to look at the way Hunt drew Faust, as opposed to Lane. "He trusts her," Stickell says plainly.

Trust shines through just from a sketch, lines on a page--or just from a silent gaze and musical echoes, more than words can say.