By Timothy Mclaughlin and Aubrey Belford

YANGON/MAUNGDAW, Myanmar, June 4 (Reuters) - Myanmar said on Thursday that persecution of its Rohingya Muslim population was not the cause of Southeast Asia's migrant crisis, a day after the United States called on the country to give full rights to the minority to help end the exodus.

President Barack Obama said this week that Myanmar needed to end discrimination against the Rohingya if it was to succeed in its transition to a democracy, as Washington upped the pressure on the country to tackle what it sees as one of the root causes of a migration that the region has struggled to cope with.

Myanmar does not recognize its 1.1 million Rohingya as citizens, rendering them effectively stateless. Almost 140,000 were displaced in deadly clashes with Buddhists in the country's western Rakhine state in 2012.

"It has been portrayed that discrimination and persecution are causing people to leave Rakhine state, but that is not true," Myanmar's Minister of Foreign Affairs Wunna Maung Lwin told diplomats and international agencies in Yangon.

He pointed to the number of Bangladeshis on board a migrant boat that landed in May as proof that the influx of "boat people" was a regional problem linked to human trafficking. 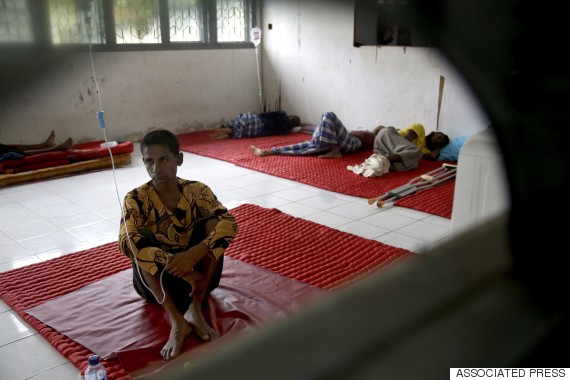 A Rohingya migrant receives a medical treatment inside a makeshift clinic at a temporary shelter in Bayeun, Aceh province, Indonesia, Monday, May 25, 2015. (AP Photo/Tatan Syuflana)

"This incident... has shown to the region as well as the international community this is not the root cause," he said.

The boat he referred to was intercepted by Myanmar's navy last month. Myanmar has said 200 of the 208 people aboard were economic migrants from Bangladesh.

But a Reuters investigation found that 150-200 Rohingya had also been aboard that boat, but were spirited away by people smugglers in the week before the navy brought it to shore.

Tareque Muhammad, deputy chief of mission at the Bangladesh embassy in Yangon, told Reuters that only 150 people from that boat had been identified and documented as Bangladeshis.

Zaw Aye Maung, the Yangon Region Ethnic Rakhine Affairs Minister, said at the same briefing that if genocide was taking place in Rakhine state then it was against ethnic Rakhine Buddhists.

"We are now in danger of being overrun by these Bangladeshis," said Zaw Aye Maung, in comments that visibly angered the ambassador from Bangladesh, Mohammad Sufiur Rahman. Sufiur Rahman declined to talk to reporters after the briefing. 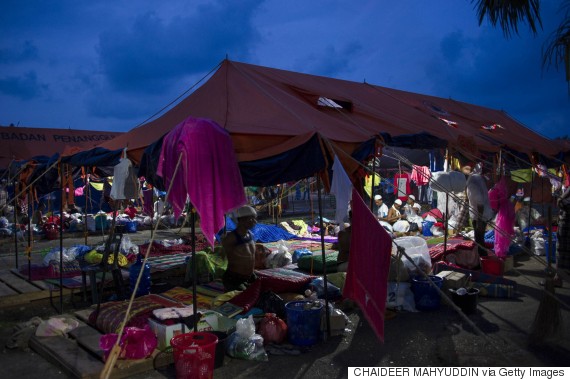 In this picture taken on May 28, 2015, Rohingya migrants from Myanmar gather at a confinement area in Bayeun on northern Sumatra island. (CHAIDEER MAHYUDDIN/AFP/Getty Images)

The current crisis blew up last month after a Thai crackdown on trafficking camps along its border with Malaysia made it too risky for people smugglers to land their human cargo. Smugglers abandoned boats full of migrants at sea.

Myanmar was in the process of verifying the place of origin of 734 migrants the navy brought ashore on Wednesday, Wunna Maung Lwin said. They were found drifting in the Andaman Sea on Friday in an overloaded fishing boat that was taking on water.

Several migrants said that smugglers had loaded them from three smaller boats onto the larger vessel.

"The traffickers told us 'we can't go to Thailand, so you have to go alone'," Marmod Toyo, who said he was a Rohingya, told Reuters.

He said he was at sea for two months after being offered 50,000 kyat ($45.25) by an agent to get on a boat to Malaysia. Marmod, who has a wife and four children, said he knew it was a trick but that his family needed the money.

"There's not enough food back home and no work," he said. "The human trafficker came and gave me money. I knew he might sell me, but I needed it."

Another migrant said his uncle, who was also on the boat, was beaten to death by one of the crew before the body was dumped overboard.

"My uncle was eating rice and asked for some water, so they killed him," said Siszul Islam, from the Bangladeshi capital Dhaka.

There was no way of independently corroborating the migrants' accounts.

Some 4,000 migrants from Bangladesh and Myanmar have landed in Indonesia, Malaysia, Thailand and Myanmar in the past month. The United Nations estimates around 2,000 migrants may still be adrift.

Indonesia would repatriate economic migrants from Bangladesh as soon as it could, but how to handle Rohingya migrants was more complex, said Andi Rachmianto, the international security and disarmament director at the foreign ministry.

"We need to differentiate between Rohingya migrants and migrants from Bangladesh because their motivations are different," Rachmianto said.