My heart was pounding while watching the video of Rokhshana: A young woman who was stoned to death in Firozkoh, a Taliban-controlled area of Afghanistan. Rokshahana was accused for committing adultery. She eloped with a man after her family arranged a different marriage.

I was watching a video of a group of men stoning a 19-year-old woman to death. 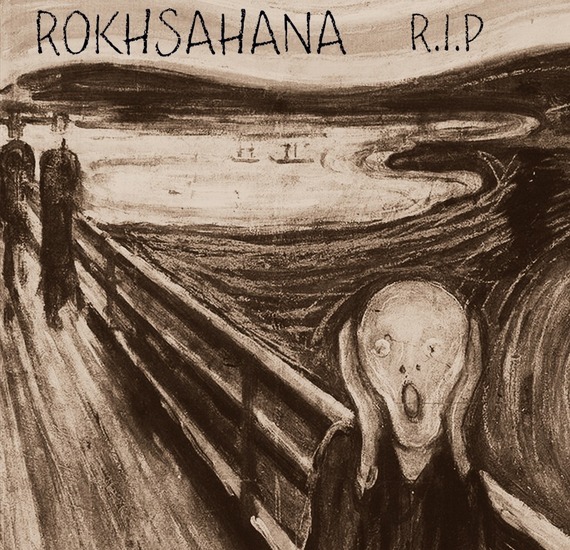 In the video, Rokshahana was inside a hole in the ground. Only her head was visible. Several men threw stones at her head while Rokshahana's screams echoed, only to be snuffed out by the men's cries of "Allah hu Akbar" (God is Almighty).

This is not the first incident of unfathomable tragedy, and unfortunately it is probably not the last. I was looking for some words to describe it: evil, barbaric, inhumane...but none of them simply did it justice because there are no words to describe horrors like these.

Aljazeera News reported that the stoning occurred after the local tribal council found Rokshahana guilty of having pre-marital sex with her fiancé. Apparently Rokhshana had no say about her life; She could not choose what to do or who she wanted to be with, and the choice that she made cost her life.

Arranged marriages still exist in many cultures. As we progress with time, arranged marriages fit less and less in our world of technology, information, options and opportunities which prompt us to feel that we have many more choices in life. However, the issue with this disturbing story was not only the arranged marriage by Rokhshana's family, but also the punishment that followed.

Yes, believe it. Some parts of our world move forward while others move backward; Men need to prove their power and masculinity to themselves, their women, and the world. It reminds me of animals where a display of power and intimidation is necessary to win the fight, but even animals, once they establish who's more powerful, many times solve the disputes without the killing each other.

I was watching and listening to Rokhshana's scream, a scream of a helpless human being.

I felt helpless too. It is indeed hard to comprehend the fatal absence of women's rights and gender equality in areas controlled by the Taliban where girls cannot make choices in the hope of a better life. We are members of the human race and we should be treated as such. All of us. No exceptions.

An interesting thought came to me while writing this article: The bitter reality is that in many parts of our world, women are still the lowest common denominator; Because men are so afraid to lose their power, they have to display their brutality over and over again to avoid any change to the status quo.

In other words;
I was watching a group of men stoning Rokhshana because they were afraid of her and everything that she represented.

In extremist Muslim societies, such as the Taliban or ISIS, men are so afraid of change in their existing structure that they must dominate their women with fear and treat them like second class citizens, deprived of equal rights and equal access to opportunities. These societies are completely thrown out of balance: A balance that only women can give.

We all know the power of evolution; History teaches us that evolution sometimes happens over a long time span, but I would like to believe that when young people are pressing for change, change will come much faster, especially in our era where everything can be shared at the press of a button.

This horrifying video footage was captured on a cell phone while the killing took place, and it is because of technology that we are able to share this story.

I was watching this disturbing video, and I wanted to tell Rokhshana that she matters, that her love matters, and that she did not die in vain.