Rolling Stone's latest cover is attracting plenty of controversy, thanks to its use of a photograph of Boston bombing suspect Dzhokhar Tsarnaev.

The cover, which features a self-taken portrait of Tsarnaev sporting shaggy hair and a goatee, identifies him simply as "The Bomber," while promising to explain "how a popular, promising student was failed by his family, fell into radical Islam, and became a monster." The cover story itself was reported over the course of two months by Rolling Stone contributing editor Janet Reitman. 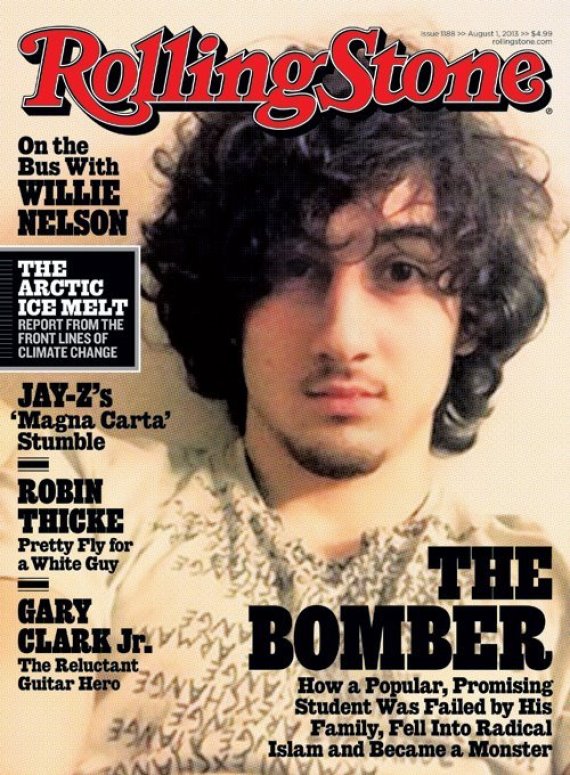 The same image has in fact been used by other publications since the April 15 Boston Marathon bombing, which Tsarnaev stands accused of carrying out with his brother, Tamerlan. The photo even appeared on the front page of The New York Times in May. However, its presence on the cover of Rolling Stone, a space typically occupied by rock stars and actors, sparked outrage on Twitter and Facebook, where many observers objected to what they saw as the glamorization of Tsarnaev. For example, Think Progress editor-in-chief Judd Legum tweeted side-by-side photos comparing the cover to a 1991 cover of Doors' singer Jim Morrison:

The Washington Post's Erik Wemple offered a dissenting view to all of the outrage:

*This is good journalism, as the photo depicts the same Dzhokhar Tsarnaev that The Post and the New York Times — and others — depicted in deeply reported pieces. That is, a regular, good guy with friends, interests and activities — a “joker,” even.

*Showing this alleged bomber in his full humanity makes him appear even more menacing.

This is not the first time Rolling Stone has featured a notorious figure on its cover in what might be described as a "glamorous" posture. As The Awl's Choire Sicha pointed out on Twitter, the magazine featured a stoic-looking Charles Manson on its cover in June, 1970.

Tsarnaev, who is currently being held without bail in a federal prison in Massachusetts, pleaded not guilty last week to 30 counts associated with the bombing.

UPDATE: On Wednesday morning, the pharmacy chain CVS and the Tedeschi Food Shops both said they would refuse to sell the issue in their stores.