Earlier this morning, Rolling Stone executive editor Eric Bates took note of the dismissal of the civilian press aide who set up the interview between General Stanley McChrystal and reporter Michael Hastings. He snarked to our own Sam Stein: "The PR person is always the first to go."

Hey, Eric, you know who also should be on their way out the door? Whoever at Rolling Stone emerged from their clown car bearing the magazine's plan to disseminate the story online.

Rolling Stone didn't just let their cat out of the bag, they practically coaxed the cat into performing tricks in public, available to be witnessed at nearly every other media outlet in the world before the magazine actually decided to stake its own claim to its own story on its own website. By the time it did, Politico had published the article in its entirety. Meanwhile, the print edition won't hit newsstands until the end of the week. Somehow, the higher minds at Rolling Stone figured it would be a great idea for the story to break and for the repercussions to be felt -- McChrystal, we'll remind you, will have had it out with President Barack Obama before the magazine hits the street -- before anyone got to actually find out more about the whole kerfuffle.

Michael Calderone, over at Yahoo's Newsroom blog, spoke to a spokesman at Rolling Stone about this whole perplexing matter:

Magazine spokesman Mark Neschis told Yahoo! News that Rolling Stone generally does not put entire national affairs stories online, instead running them only in the print magazine. (One recent exception was Tim Dickinson's investigative piece this month on the BP oil spill.)

While a magazine understandably wants to reap the financial benefits of having a major, deeply reported story only available on the newsstand, the idea of holding breaking news for print doesn't easily mesh with the demands of the 24/7 online news cycle. Not to mention, with McChrystal summoned to the White House to discuss his comments made in front of reporter Michael Hastings, the public is going to want to know what he actually said.

Right? Elsewhere, TPM's Megan Carpentier, offers a handy 11-point "guide to how to have the biggest news story and still lead to the death of investigative print journalism" and notes that anyone who wandered over to Rolling Stone's website before 11:00 am today, in a fit of curiosity over just what the hell everyone on the news was even talking about, found this waiting for them as their top story: 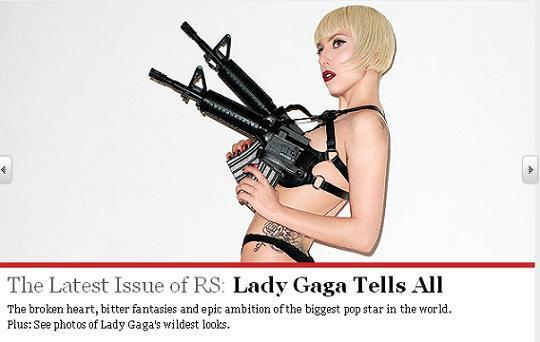 Left undiscussed is whether or not President Obama should ask for Lady Gaga's resignation or deploy Gaga's weaponized brassiere to Helmand Province.

At any rate, Rolling Stone plans to post a sheaf of "follow up material" -- maybe it'll do a better job maintaining ownership this time around.