STURGIS -- What does it say about the McCain Campaign that the poster for Monday's event featured a bar blond in chaps and bikini-top riding a buffalo, her left hand in a tuft of b-hair, her right cradling a beer? John McCain -- his photo -- is smaller and below her. The billboard on the road into Sturgis, site of the 68th annual Jackpine Gypsies motorcycle rally, read "Kellie Pickler, Kid Rock and John McCain," in that order, for the night's mainstage event at the Buffalo Chip campground. The McCain campaign folks back at the Virginia HQ must have been pulling their very human hair, but what does a war hero care about third billing?

I am at the event. I am choking on nitro, mown hay, chopper dust and pot. Police dogs are sweeping the crowd. The mainstage announcer says bikers have to move out of the security perimeter during the sweep. "Be sure to take all knives and bombs with you," he chortles. For sure, the knives are real. Cruising through town, I pass a "knives sharpened here" booth at the Episcopal Church. Three aged and rounded cavaliers of the road lounge before a poster, hand-drawn in black and red, featuring a dripping dagger and the advertisement "Under the Blood."

Sturgis, in the Black Hills of South Dakota, is cavalry country. Historic Fort Meade is here, as well as the Fort Meade Veterans Hospital. On the flight in from Denver, a benefits coordinator for the VA tells me that her job now is all about helping young men with head injuries re-connect. There are more types of brain trauma than human beings should be subject to.

All afternoon I'd been wondering how many of the thousands of bikers here are veterans. Most of them are middle-aged, some in their sixties and seventies. They tend to the large and soft. A bounty of beer bellies on parade. Authenticity aside, this is McCain Country, too. The best advertisement for a bar here is "owned by a veteran." The proprietor of a Gentlemen's Club -- wet t-shirt contests daily -- "served in Iraq on a medical team."

The lure of motorcycle week in Sturgis is the surrounding Badlands countryside with its miles of open road. But it's also alcohol, drugs and sex. My other plane conversationalist was a Texas woman coming in to help at her family's barbeque booth. Dorothy's husband called her down in Austin the night before to complain of the couples coupling nekkid on his picnic tables at the Chip. The evening will be more than a mere military tribute to John McCain.

The bikers are a sedate group, though, staying within the speed limits and using turn signals, strolling through town with plastic-bagged purchases in hand. Christianity is a strong current running through biker culture. Groups of threes and fours clasp arms to shoulders, heads bowed in prayer. There's a "bike for Jesus" charity bike wash and plenty of daily AA meetings. A younger man in khaki shorts strode down the sidewalk bearing up jauntily under a varnished and emblazoned crucifix that must have been twelve feet tall. The t-shirt on this pilgrim says, "Live a good life so the preacher won't have to lie at your funeral." Motorcycle week in South Dakota is the descendant of the old summer camp meeting -- sex and redemption in equal measure at campground.

Bikers brought their rides inside the security perimeter earlier in the day. The spit and polish on them makes them look as if they are standing at attention, waiting for McCain. The crowd itself is amiable. Sitting next to me and smoking at a press table, which has been claimed most amiably by bikers, is an older guy wearing a black cowboy hat with two toothpicks stuck through the brim. "I don't care if you're for the other guy," he says apropos of Senator Obama to his friends, "God Bless we have a choice!" His spirit of generosity is reflected in the low level of enthusiasm of this pro-McCain group for their man as candidate.

"I'm not excited about McCain," George tells me, "but Obama's gonna spend all our money." Unusually thin and wiry for a road hog, but decked out in classic black leather, George adds, "We're still fighting the Vietnam War." George and his wife Marie urge me to walk over to the fence and check out the POW/MIA car, printed with the names of all the American servicemen who were imprisoned or went missing in Nam. "It's possible it could happen again over there," George warns of Iraq. He's summed up the evening's sentiment, for most everybody seems to find the meaning of life and politics in the crucible of war. Many bikers wore the red poppies the elderly VFW volunteers sold throughout the day. 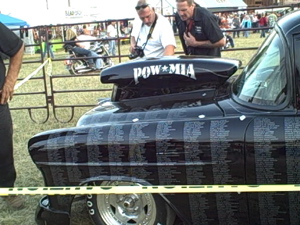 The Tribute to the Troops portion of the evening's entertainment was all genuine iconic McCain Event -- bold-faced and underlined. We sang the National Anthem to the accompaniment of a whining electric guitar and the vroom-vroom-vroom of dozens of Harleys. "Hu-a! Hu-a!" the leader of the Patriot Guard greeted the crowd, and the Marines hailed him back. "We believe in America! The land of beautiful roads, the land of beautiful bikes, the land of ice-cold beer, and a land of beautiful women!" Coyote howls from the men. "That's the best hu-a a man can get."

Before the solemn rite of the Flag Folding Ceremony, in which a grizzled vet intones the meaning of the twelve folds, Jillian from the volunteer organization Hearts to Serve introduces another woman not with her name but with the description, "a proud Marine Corps wife of twenty-one years." She says that four years ago she received a phone call that her husband -- they had been high school sweethearts -- had been shot on his second tour in Iraq. "No one is prepared for that phone call," she says. Her husband had been shot through the eye, the bullet taking two inches of his brain before exiting. "He was handed to me as roadkill," she says of her Master Sergeant, who now needs her round-the-clock care. This Marine Corps wife is not looking for pity -- she is looking for donations to Hearts to Serve. "God Bless, and Semper Fi," she says.

"President Johnny!" the bikers shout as John McCain takes the stage. VROOM-VROOM-VROOM! The choppers add their chorus. "I'll take the roar of 50,000 Harleys any day," McCain says in reference to Obama's crowd in Berlin. "FREEDOM!!!" the poachers at the press table roar, and the table shakes as if under attack. McCain mentions his rival again, saying Obama wants to save gas by inflating tires, and some of the bikers cry, "Fuck him! Fuck Obama!"

"I want us to come home [from Iraq] with victory and honor," McCain tells the crowd. VROOM! For these biker vets, that's the pledge of Semper Fi -- that their sacrifices and the lives of their friends never be in vain. "You are the heart and soul of America," McCain says to the bikers. "America will remain the last best hope for man on earth." Beyond the hyperbole, the bikers get McCain's underlying message, his assurance that their lives do indeed count for something. Quickly, McCain moves on to humor, musing that his wife is pretty enough to win the beauty contest later in the evening, the only American woman to be both First Lady and Miss Buffalo Chip. "Wet t-shirt! Wet t-shirt!" a guy in the crowd shouts. McCain and some of the bikers laugh. In closing, he says, "I want to see a lot of bikes parked outside the polling places of America."

Not so many of the bikers stayed for Kellie Pickler and Kid Rock, a different crowd came in for the late show. Elmo, a biker whose black leather vest is sewn with Harley patches, grabbed my hand. "You're press, right? " He leaned in close to confide. "I'm not crazy about this guy [McCain] -- but that Obama! A Communist! We gotta save the country, you know?"