On the day she was ordained as a Roman Catholic priest, Victoria Rue felt like every cell in her body was being rearranged. Presumably, the Vatican had a similar reaction.

While news of Rue's ordination in July 2005 was likely enough to make the Vatican drop that wine chalice--in the Catholic faith priesthood strictly adheres to those sporting an XY chromosome--it wasn't that unheard of. Three years before, seven women had become priests on the River Danube. (That's because bodies of water are technically considered outside the jurisdiction of the archdiocese). But by January 2003, all seven were ex-communicated. Two of the womenpriests, Christine Mayr-Lumetzberger and Gisela Forster, were later ordained as bishops by Roman Catholic bishops in good standing in the church.

And so began a spiritual chess game that created a powerful ripple effect as a handful of other women stepped up to become womenpriests. No surprise here: the Vatican suddenly fell silent.

"The Vatican saw that if they made us a cause celeb, people would gather around us," says Rue, who is in her sixties and a lesbian. "If they didn't give us publicity, then people wouldn't know that womenpriests exist."

Even so, not all people are uncomfortable with the idea. According to a 2006 National Catholic Reporter survey of U.S. Catholics, 62 percent of the respondents supported ordaining women as priests; 81 percent supported ordaining women as deacons. An Associated Press/Ipsos poll conducted in April 2005 found that 64 percent of U.S. Catholics support women's ordination.

That's enough to fuel Rue and her spiritual co-patriots in a movement that has been growing since the Pontifical Biblical Commission reported that there were "no scriptural objections to ordaining women to the priesthood" in 1975.

Truth is, the history of womenpriests, says Rue, can be found both in archaeological evidence as well as "The Epistles of Paul" and "The Acts of Apostles." Interestingly enough, proof of their existence was eradicated in the 12th Century when Gratian of Bologna rewrote canon law. "With one stroke of his misogynist pen," muses Rue, "he erased centuries of histories of womenpriests."

UPDATE: During an interview with reporters, Pope Francis reiterated the views of John Paul II--he stated that the "church has spoken and said no" to the ordination of women. But representatives from Roman Catholic Womenpriests noted in a follow-up press release that, "John Paul II and the Vatican are not the entirety of the church. The church, as taught by the Second Vatican Council, is the People of God, and this church has consistently said yes by calling for women's ordination, as evidenced in public opinion polls, and by their support of women who are called to be priests.

"We believe the church has spoken and is anxiously awaiting for women's ordination to be accepted by the Vatican hierarchy. Roman Catholic Womenpriests are already serving in communities across the country. We work in a variety of ministerial roles including serving as hospital chaplains, prison ministers, and as pastors for inclusive communities. We call on Pope Francis to do the same by listening to the church, the people of God, and say yes to the inclusion of all people in a renewed priesthood."

Rue's own history is interesting to note here.

In the late 1960s, she nearly became a nun. She left the convent--and the Catholic Church--after feeling constrained by some of the rules of her order, which did not allow postulants or novices to return to their families in case of the death of a relative unless it was a brother, sister of parent. Eventually, the theater became her "church"--she morphed into a playwright and director for feminist theater in the Big Apple.

But Rue's ecclesiastical side wasn't completely satiated. In 1985, she entered New York's Union Theological Seminary and studied the feminist and lesbian pulses of Liberation Theology. After earning her doctorate in Theology in the Arts at Graduate Theological Union in Berkeley, California, in 1993, she later went on to teach women studies and comparative religious studies at San Jose State University, where she presided over weekly Catholic mass in the university chapel for several years. (In April, 2006, the Diocese of San Jose publicly condemned Rue for "claiming" she is a female Roman Catholic priest by making a claim of its own: "Rue is not a validly ordained priest of the Roman Catholic Church. Members of the Roman Catholic Church should not participate in celebrations of the sacraments that are conducted by Victoria Rue, as those celebrations are not in union with the local or universal Church.")

While womenpriests cannot "technically" hold "mass" in traditional white-spired churches, Rue continued to hold mass at SJU. Eventually, she also became the priest for Sophia Catholic Community, an open-minded Catholic kinship based in Santa Cruz, California. Then, in January of this year, she was asked to oversee another bold undertaking: overseeing several Catholic masses within Trinity Episcopal Church in San Francisco. (She no longer presides over mass at SJU.)

It's a pretty mindbending spiritual journey, but it's only part of Rue's contribution to the current Catholic paradigm shift. Rue is also a lesbian, who has been with her partner, Kathryn, for more than 20 years.

"As a movement, we believe in the God-given beauty of sexuality," she says. "And therefore we do not create a hierarchy of one sexuality being better than another sexuality. I am a lesbian. I've been ordained. So, my sexuality is important to my priesthood."

In regards to the Vatican's "Halloween" letter of 1986, which stated that a homosexual orientation is "an objective disorder," Rue is quick to respond: "That means that right down to my very bones the Vatican is suggesting that there is something wrong with me as a lesbian, and that all gay and lesbian people are sick despite massive evidence to the contrary in medical, psychological, and sociobiological research. They are just plain wrong."

She says as a lesbian feminist priest, she understands Jesus' message to be "a call to love one another as I love myself."

As for the Church's strict stance on celibacy, she notes that the apostles were married. "The Bible clearly states that Peter had a wife," Rue says. "We don't make a vow of celibacy. Those who wish to be celibate, fine. It's a lovely state. It's not the only state, however. Priests should look like the people they serve."

Hail Mary to that!

In the meantime, the number of Roman Catholic female bishops in the U.S. is on the rise, and more than a hundred womenpriests in the RCWP community (which includes priests, deacons, candidates and bishops) world-wide leading the cause of Roman Catholic Womenpriests.

"I think this is the beginning of what I call a renewed priestly ministry, a more inclusive priesthood, a more inclusive theology," Rue notes. "And womenpriests are only a tiny, little piece of that. Believe me, I don't delude myself in thinking we are the vanguard of the church.

"There are a lot of rebels at the base," she adds with a grin.

Learn more http://www.romancatholicwomenpriests.org. Get an update on Rue's work at http://www.victoriarue.com/

A recent ordination (below): 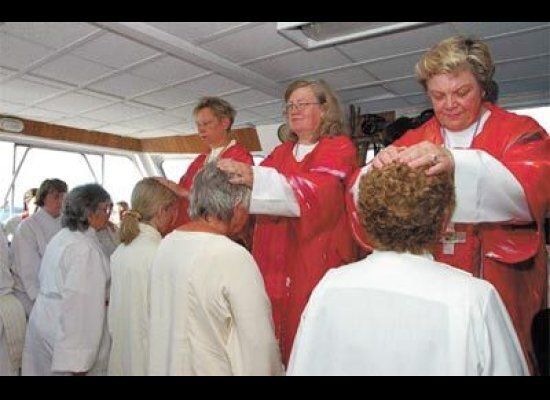