Less than a year after Freedom Riders boarded buses for Mississippi and demanded enforcement of a Supreme Court ruling that outlawed segregation at bus stations, a black man was gunned down by a white police officer at a stop in Taylorsville.

U.S. Army Cpl. Roman Ducksworth, a military policeman stationed at Fort Ritchie, Md., had come home to be with his wife, Melva, who was suffering complications during her pregnancy with the couple's sixth child.

As the bus pulled in, Taylorsville, Miss., police officer William Kelly removed Ducksworth because the driver couldn't wake him, according to government records of some passengers' accounts. Others, including the NAACP, claimed the dispute was about segregated seating.

What happened next, however, is not in doubt. Kelly bashed the unarmed soldier in the head with a club then fatally shot him in the heart after firing a warning shot into the ground. It was April 9, 1962.

There was never a trial connected with the case. A town marshal claimed Ducksworth was drunk, and a grand jury cleared Kelly days later, agreeing that he shot in self-defense.

But 51 years later, Ducksworth's family members say they still are waiting for justice. "There's something wrong with that story," Cordero Ducksworth tells The Huffington Post, of his father's death. "What reason did Kelly have to be afraid? [My father's] a human being. He's not just a human being, but he's a serviceman. He's a protector. It just doesn't look right."

The Ducksworth family hoped to clear their father's name under the Emmett Till Unsolved Civil Rights Crime Act of 2007, which forced the Department of Justice and the FBI to reopen investigations into 112 racially motivated homicides, including Ducksworth's. However, only one thus far has resulted in a conviction, according to a report from the U.S. Attorney General's office last fall, and Ducksworth's, along with 90 other cases, were closed.

But Cordero Ducksworth, 56, said attorneys who volunteered to look at his father's case recently unearthed records showing segregationist informants for the notorious Mississippi State Sovereignty Commission had identified Ducksworth family members as "agitating" in their small town. When the DOJ closed the Ducksworth case in 2010, saying there was no one to prosecute, its final report didn't mention that the commission in 1958 had started monitoring some of Ducksworth's relatives who were believed to be NAACP activists.

"I want everything to be rewritten. I want my family to have closure and to know why that happened," said Ducksworth, who was 5 when his father died. "There's no reason why Mississippi should say this was justified." 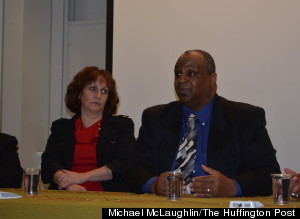 Created in the wake of the Supreme Court's 1954 Brown v. Board of Education of Topeka ruling that ordered school desegregation, the commission was granted vast powers to investigate people and organizations that challenged Jim Crow laws.

McDonald and Johnson say it's discouraging that federal agents looked past the trove of hundreds of thousands of pages of state snooping. They question the DOJ's effort to solve civil rights era murders as required by the Till Act.

"Unless you can push them and show them where their own documents are, they don't necessarily go and search," said McDonald. "You can never be quite sure that they've given you everything."

The names of Ducksworth's relatives surfaced in the commission's files about NAACP activity in Taylorsville, which is about 60 miles southeast of Jackson. Two highway patrolmen who were "very much opposed to integration," according to a March 3, 1959, memo to the commission's director, "claimed that the Negroes who were principally agitating at Taylorsville, Mississippi are named Duckworth."

(In Taylorsville, there are many people named Ducksworth and others named Duckworth. Cordero Ducksworth said they're all part of the same extended family. At some point, some relatives dropped the "s." The names are also often misspelled. Many media accounts about Roman Ducksworth's shooting misidentified him as a Duckworth.)

A shorter dispatch from March 2, 1959, said "some Negroes by the name of Duckworth were instigators of the NAACP in Taylorsville."

A subsequent memo in the commission's archive from June 1959 said other members of law enforcement "mentioned the Duckworth Negroes and others who are already listed in our files who live around Taylorsville as possible members of the NAACP."

Commission records aren't proof that Ducksworth's slaying was anything other than an isolated and legitimate use of force, but their absence from the DOJ's recent re-investigation raises questions about the department's effort to dig up leads in the Ducksworth and other cold cases.

Tracking down every shred of decades-old evidence from sheriff's offices, district attorneys, state police, FBI bureaus and the DOJ's civil rights division is a formidable challenge. Fires and floods destroy archives, and what survives can be lost by lackadaisical record keeping. Current investigators may never know if they've amassed a complete history.

Sovereignty commission documents, however, were released in 1998 as the result of an American Civil Liberties Union lawsuit and the Mississippi Department of Archives and History uploaded a searchable version to its website.

The DOJ refused to discuss its investigation of the Ducksworth case with The Huffington Post, but released a statement saying it believed the Sovereignty Commission records are unrelated to the Ducksworth homicide.

Once a determination is made that a matter is unprosecutable, the Department of Justice no longer has any authority to continue an investigation. Matters like the Duckworth case are unprosecutable, and therefore closed, because our investigation determined that the only subject is deceased. While we fully recognize that our mandate may leave some unanswered questions, we do not have the authority or resources to answer all of the questions some may have that go beyond whether a case is prosecutable or not. And while we fully support those academics and members of the media who wish to learn more, our investigation must end when the relevant and necessary criminal evidence is obtained.

The 1962 shooting of Ducksworth immediately outraged many. News accounts said more than 2,000 attended his funeral, a huge turnout in Taylorsville, population 1,132, according to the 1960 census. The Army sent an integrated color guard to the ceremony for the fallen vet.

The NAACP showed HuffPost a copy of a telegram it wired to then-President John F. Kennedy calling on him to "reassure the public conscience by making it unmistakably clear that you will enlist every appropriate measure at your command to see that Cpl. Duck[s]worth is brought to justice." The group also called for the Trailways bus driver to be fired, according to files in the NAACP's archive.

Although it is possible that Ducksworth shooting was random, his death came at a time when civil rights activists and their families were frequent targets of conspiracies organized by members of law enforcement.

That's why authorities should probe any possible connection between the informants who kept tabs on Ducksworth's relatives and his murder, said University of Southern Mississippi history professor Keven Greene. (He's unaffiliated with Cordero Ducksworth or his attorneys.)

"It's extremely important knowing the paranoia of the Sovereignty Commission," Greene told HuffPost. "It's certainly worth digging into to see what can be found. It's a fascinating development."

No one in Ducksworth's family received a call or visit from a federal agent looking into the case while it was still open, Johnson told HuffPost.

One day in 2010, a letter arrived for Ducksworth's widow telling her that the government had closed the investigation without prosecuting anyone. "We can't really point to much that happened to bring this or any of the cases to fruition," Johnson said.

Alvin Sykes, a Kansas City activist who lobbied for the Till Act said the government has done a relatively good job investigating cold cases, considering the amount of time that had elapsed, and the age and reluctance of potential witnesses.

"Given the depth of the atrocity and beginning so late," Sykes said, "it's been good and better than not anything at all."

Kelly died in 2004, before the Till Act was passed.

Correction: An earlier version of this story said that Brown v. Board of Education was decided in 1956. The Supreme Court actually issued its ruling in 1954.