It's been more than two years since Catholics across the U.S. switched to a new Roman Missal, the prayers and instructions that make up the ritual "call and response" during Mass, but a new survey finds that a majority of priests still said they "don't like it."

The survey results, released Tuesday by the Catholic research organization Center for Applied Research in the Apostolate, or CARA, show 52 percent of priests said they disliked the updated Roman Missal. Many said the new missal is too formal, awkward and distracting from worship.

The missal, implemented in November 2011 for use among the nation's 68 million Catholics, includes requirements for different responses from congregants in a dozen sections of Mass. For instance, priests previously said, "The Lord be with you," and congregations replied, "And also with you." Since the changes, congregations say, “And with your spirit.” During the Nicene Creed, the statement of faith, Catholics no longer say that Jesus is “one in being with the Father," but instead say Jesus is "consubstantial with the Father.” He's no longer "born of the Virgin Mary," but "incarnate of the Virgin Mary." The phrase "Christ has died, Christ is risen, Christ will come again" was removed from the Mass entirely because it was never in the original Latin version, which the Vatican wanted the new missal to better reflect.

Overall, half of clergy said they disapproved of the Vatican's leadership in bringing about the new missal, a process that began in 2000 under Pope John Paul II. The missal was the first major change to Mass rituals since the early 1970s, when revised texts were issued to implement Second Vatican Council reforms that allowed local languages to replace Latin. It was crafted under guidelines from “Liturgiam authenticam” (Authentic Liturgy), a 2001 Vatican document that said the new missal should replicate the Latin Mass in vocabulary, syntax, punctuation and capitalization. 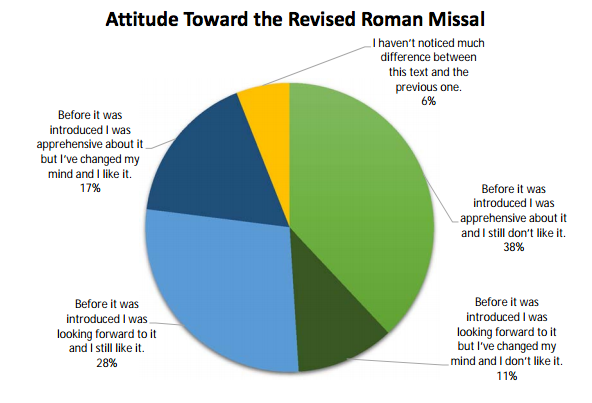 Image source: Center for Applied Research in the Apostolate.

The Rev. Anthony Cutcher, president of the National Federation of Priests’ Councils, said in a statement that the survey may help lead "constructive criticism" of the missal. "Armed with the latest data, we can take this opportunity to help craft a revision that stays true to the text and at the same time is accessible to all," Cltcher said in a statement on PrayTell, a Catholic website.

The CARA results echo those of a survey the Diekmann Center at Saint John's School of Theology-Seminary released in May. In that report, researchers found that among 1,536 priests from 32 dioceses who were surveyed, 59 percent disliked the new translation and 80 percent said the language was awkward and distracting.

CARA's survey included a representative sampling of 444 clergy and 75 lay leaders across the U.S. church who mailed and emailed responses from October 2013 to February 2014. The margin of error among clergy responses was 4.6 percent, and among lay leaders 11.3 percent.