SEATTLE — A dive to the undersea cliff where a famous Roman shipwreck rests has turned up either evidence that the wreck is enormous — or a suggestion that, not one, but two sunken ships are resting off the Greek island of Antikythera.

"Either way, it's an exciting result," said study researcher Brendan Foley, an archaeologist at Woods Hold Oceanographic Institution who presented the findings here today (Jan. 4) at the annual meeting of the Archaeological Institute of America.

The Antikythera wreck is famed for the massive number of artifacts pulled from the site over the past century. First discovered in the early 1900s by local sponge divers, the wreck is most famous for the Antikythera mechanism, a complex bronze gear device used to calculate astronomical positions (and perhaps the timing of the Olympic games). Numerous bronze and marble statues, jars and figurines have also been pulled from the wreck. The ship went down in the first century B.C.

The wreck is perched on a steep undersea cliff in water too deep for standard scuba gear. The undersea landscape also makes deploying remotely operated submersibles impossible, Foley said. In 1976, Jacques Cousteau led a diving expedition to the site. Since then, it has been unexplored, thanks in part to its remote location in the strait between Crete and Peloponnese. 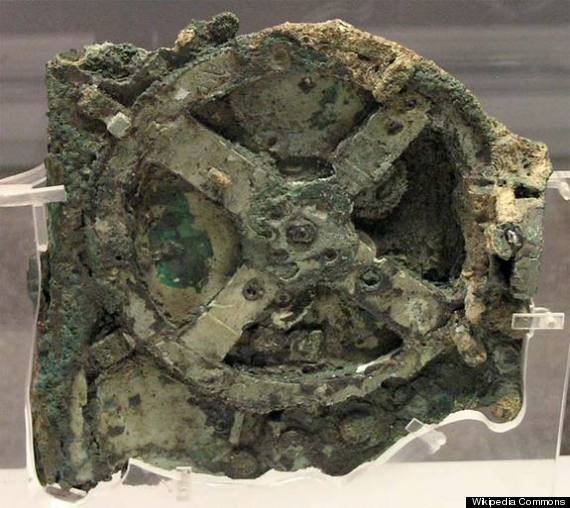 First discovered in the early 1900s by local sponge divers, the wreck is most famous for the Antikythera mechanism, which contains a maze of interlocking gears and mysterious characters etched all over its exposed faces. Originally thought to be a kind of navigational astrolabe, archaeologists continue to uncover its uses and now know that it was, at the very least, a highly intricate astronomical calendar.

Led by Aggeliki Simossi, the director of the Greek Ephorate of Underwater Antiquities, Foley and colleagues from Greece and Woods Hole watched footage and pored over logs from the 1976 dive. With so many artifacts already taken from the site, they knew there would be little evidence of the shipwreck exposed on the ocean floor. They'd have to match the underwater geology to find the wreck.

In October, diving with technical scuba gear and diver propulsion vehicles that look like underwater fans, the team found the sweet spot, marked by a scattering of amphora, or large curved jars. [See Photos of the Antikythera Shipwreck]

Intact artifacts from the wreck were spread over a huge area, about 197 feet (60 meters) long at depths ranging from 114 feet to 197 feet (35 to 60 m), Foley said. That's large for an ancient shipwreck, Foley said, suggesting either a huge ship or perhaps more than one wreck. The findings are preliminary, Foley said, but the team may have ultimately been excavating 984 feet (300 m) away from the site explored by Cousteau. If that's the case, he said, they may have found a separate wreck — likely part of the same fleet as the original wreck that went down in the same storm.

One reason for the researchers' uncertainty is the fact that they used Cousteau's Antikythera expedition videos to gauge where to anchor their boat. Since some of the shots in the video were almost certainly staged, the researchers can't be sure they weren't diving at a site hundreds of yards away from the site explored in 1976. 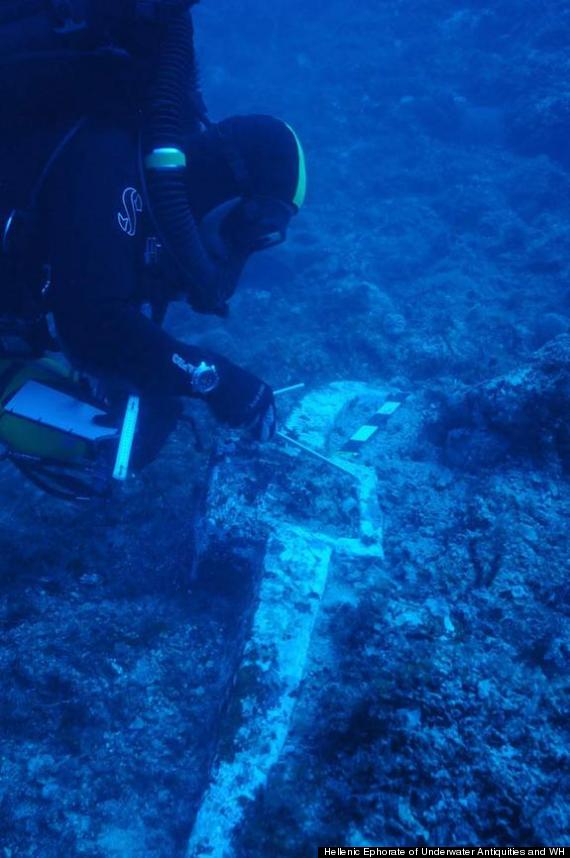 Here a researcher examines the anchor of what may be the Antikythera wreck or another wreck nearby. They are uncertain because they used Cousteau's Antikythera expedition videos to gauge where to anchor their boat. Since some of the shots in the video were almost certainly staged, the researchers can't be sure they weren't diving at a site hundreds of yards away from the site explored in 1976.

Either way, the wreck site has many more artifacts to offer, the researchers found. They pulled one jar to the surface, which will undergo DNA testing to determine its contents. They also recovered two components of a lead anchor, which itself was resting on top of other artifacts, suggesting it was on deck when the ship went down.

"What else could be down there?" Foley said. "Are there more pieces of the known Antikythera mechanism? Is there another mechanism down there?"

The researchers plan to return to the area next year and will use metal detectors to check the site almost 1,000 feet away where Cousteau's team may have really been, he said. There are no artifacts visible on the ocean floor other than the spot that Foley and his colleagues explored, but metal detectors should pick up on any remnants under the sand at the other site if there are in fact two wrecks. [The 7 Most Mysterious Archaeological Finds]

What's more, the technical scuba gear may also allow archaeologists to dive deeper and more extensively in the future, Foley added. The dream, he told LiveScience, is to find an "undisturbed Antikythera," or a significant wreck that hasn't been disrupted for decades.

"Because the site has been so intruded upon for more than a century it gets really hard to disambiguate what's myth and what's fact," Foley said.

Correction: Jacques Cousteau's name was incorrectly spelled in an earlier version of this article as "Costeau."