An elaborate Roman tombstone that dates back 1,800 years has been unearthed in England, and the find has archaeologists excited.

“It's incredibly rare," Neil Holbrook, chief executive of Cotswold Archaeology, the company that conducted the excavation, told Live Science. "We've only had it out of the ground 24 hours, but already it's created a massive amount of interest and debate."

The tombstone was excavated Feb. 25 at the site of a former parking garage in the town of Cirencester. The stone seems to mark the grave of a 27-year-old woman, as it bears an inscription that reads "D.M. BODICACIA CONIUNX VIXIT ANNOS XXVII.

If your Latin's a bit rusty, that means "To the spirit of the departed Bodica, wife, lived for 27 years." 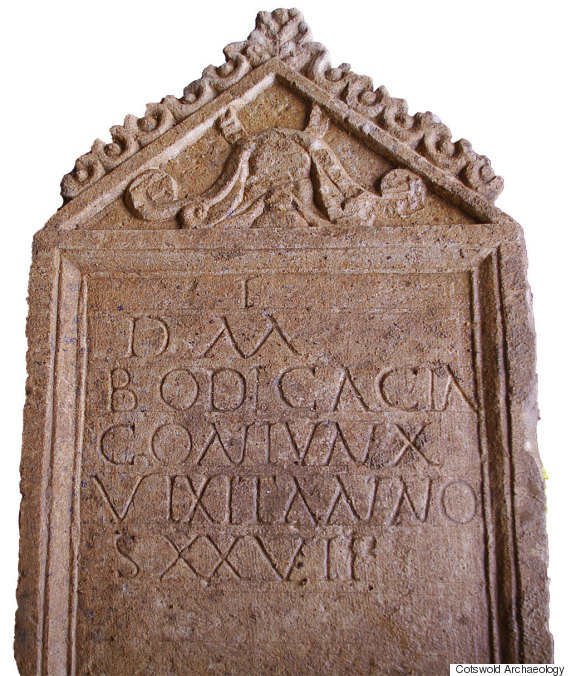 Who was Bodica? Archaeologists aren't sure. Since the name is of Celtic rather than Roman origin, she may have been married to a habitant of Gaul or Rome, Holbrook told BBC News.

"What's weird is that the inscription only fills half of the panel, so there's a space left below it," he said. "You can see horizontal marking-out lines, so I guess what they were going to do was come back later when her husband died and add his name to the inscription."

But the inscription was poorly written, perhaps by someone who was illiterate, Holbrook told Live Science. Bodica's name is even misspelled as "Bodicacia."

If there's an answer to the mystery, it may lie in skeletal remains, including a skull, that also were found at the site.