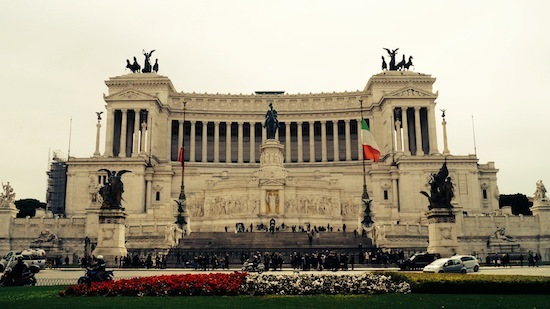 As soon as the Best Foreign Language Oscar was handed out, Italian companies began advertising tours of 'The Great Beauty' -- La Grande Bellezza. But to truly view Paolo Sorrentino's Rome, one needs to do it with the same individualistic, somewhat aristocratic spirit of Jep Gambardella, the film's incredible and irreverent protagonist, played by Toni Servillo. Big tour buses, crowds, lines and regular guides reciting their drone need not apply. The Great Beauty is a Mercedes, one top class hotel, and some little known out-of-way places kind of experience.

The Eternal City can get a hold of anyone, and never let go. Ideally, it would take at least a week to see it all, but say you are scheduling a layover from a U.S. flight to the Middle East or South Asia, then 24 hours in Rome would be just perfect. In one well-planned day, you can get definitely get an idea of the place and discover within it, and yourself, the passion and elegance the city is known for.

Rome is enveloped in a cinematic mystique she owes to the mastery of Federico Fellini, Vittorio De Sica, William Wyler and Roberto Rossellini. In recent years, Woody Allen, the late Anthony Minghella, Nanni Moretti and Roberto Benigni have all shown their magical takes on this buzzing metropolis where history, along with great cappuccinos, reign supreme. But it wasn't until Sorrentino portrayed the contradictory yet complimentary intellectual, political and religious sides of Rome in his Oscar-winning film that we finally got to see this gorgeous city in all its naked allure. That is the city I wish to share.

Eccentric fashion blogger Bryan Boy said "you have to make your readers dream." And while I can gush about Rome in hyperboles, the best way to get to heart of the city is with someone like Lucian, the owner of Best Taxi Roma. His knowledge of the city's hidden nooks and corners astounded me, and his comfortable car spoiled me, so much so I didn't want to leave... 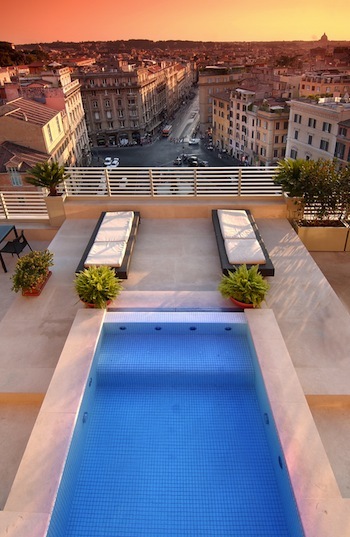 After an early morning luxury pickup from Fiumicino airport (you'll most likely have traveled overnight from the U.S.) and a smooth forty-five minute drive into the city, I suggest dropping off suitcases at your pre-booked Hotel Bernini Bristol in Piazza Barberini. Right at the foot of the Via Veneto, the hotel has all the posh-factor of the famed boulevard, yet offers a much more tailored experience, with gorgeous suites and perfect rooms, along with impeccable service. A cappuccino to refresh and relax on their panoramic terrace is also a good way to get into the rhythm of the city. Then, off to some sightseeing by car.

Up Via Veneto and into Villa Borghese for some poetic waxing of the watching kind is one of my favorite ways to spend a morning in Rome. Sprinkled amidst the beautiful gardens are marble statues of great world poets such as the Persian Ferdowsi, the Egyptian Ahmed Shawk and the French Victor Hugo. It's amazing in May when the rose gardens are in bloom, but honestly, Villa Borghese never looks the same, no matter how many times you visit. The last time I was there, the Paulonia tomentosa trees were flowering and added a Japanese sensitivity to the landscape. 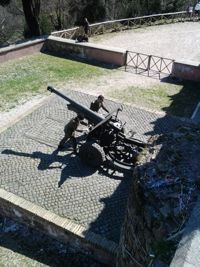 Then, it's imperative to reach the Janiculum before noon to watch, and hear, the daily firing of the cannon. Romans set their clocks to the sound of the cannon, and the view from the hill is simply breathtaking. I'm ever amazed that the sight is not crowded since its incredible vantage point gives true insight into the majestic beauty of Rome. From there, over to the Square of the Knights of Malta, where you can peer through a keyhole and see the Basilica of Saint Peter perfectly framed by the trees. And don't forget a walk through the Orange Garden ("Giardino degli Aranci/Parco Savelli") for another breathtaking view, and some incredible scents. If you happen there in the late spring, you'll walk among the fragrance of orange blossoms which is simply intoxicating.

On the way down, check out the villas lining the streets of one of the most expensive areas in Rome, the Aventine Hill. Legend goes that when Romulus and Remo were choosing hills where to build their cities, Remo chose the Aventine. Well, Romulus of course saw more signs from the gods and ended founding the city of Rome, but I bet Remo lived much more elegantly! 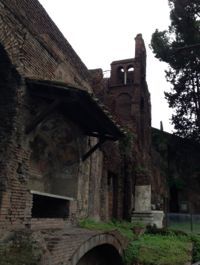 Passing the Circo Massimo, then over to the Bocca della Verità ("Mouth of Truth") to discover if you're indeed being honest, a-la Audrey Hepburn in Roman Holidays. Stop for a quick look at the Casa Romana dell'Ara Coeli, the only Roman-era home still standing. Five stories high, the original building would have included shops on the ground floor, a store-owner's loft upstairs and three apartments above that. Then peeking around the ancient structure, you'll be able to just make out the majestic marble of the Vittoriano.

Built at the turn of the 20th century, the Altar of the Nation was erected to honor the first king of a unified Italy, Vittorio Emanuele II, who died in 1878. While the Vittoriano is a bit over the top, even by Roman standards, I personally love the nearly fluorescent white of its structure, punctuated by the bronze statue of the King riding a horse. Romans are known to call it the "Wedding Cake" or "Dentures", a bit derogatory but also as a way to show that even lavish and grand doesn't impress them. It's just another day in Rome.

Turning around from the top of the Vittoriano (a trip up the staircase is worth it for another great vantage point and some good exercise before lunch) you can view some history I'd rather forget, to the left. The window of Palazzo Venezia is where Mussolini would look out from to make his famous speeches. Back at ground level, crossing the street to the right of the piazza, you'll get a perfect shot of the Colosseum. It's my favorite way to view that monument, as there are usually lines and lines of tourists waiting to get in. Although, at the moment, the site is being restored, so your photograph will look like a strange mixture of ancient and modern. 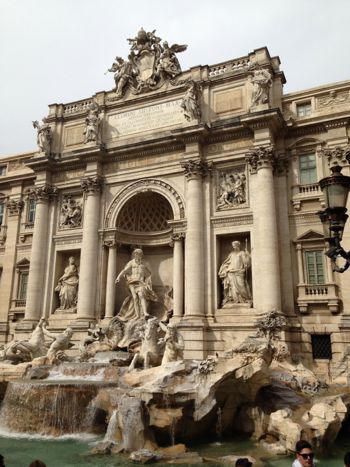 Onto the last monument on my list, the Fontana di Trevi, where Fellini filmed his iconic scene in La Dolce Vita. Nothing says Rome like Fellini's film but then again, he didn't have to deal with swarms of tourists blocking the view. On my last visit, it felt more like the penguins' exhibit at the Bronx Zoo than being at the steps of Niccolò Salvi's masterpiece. So quick look, then off to lunch from there.

Perhaps the best way to celebrate a Roman lunch is with some "pizza al metro" - pizza by the yard. I'm not a big fan of Neapolitan pizza, despite my heritage, but adore the way the Romans make it. Thin-crusted, perfectly seasoned, and featuring such diverse toppings as potatoes with smoked mozzarella, or zucchini flowers. Forno Campo de' Fiori even has a prosciutto and fresh figs one in season. And no need to commit to just one type, you can have three or four different styles, in one lunch. The place is very cool during the day, before the waves of American college students invade it to get drunk there all night.

Back to the hotel for a quick check-in and then a walking tour of the best shopping Rome has to offer. Take the Via Sistina on the right of Piazza Barberini, and it will lead you to the top of the Trinità dei Monti, the upper part of the Spanish Steps. Walk down, carefully (the steps are slicker than they appear) and once at ground level Piazza di Spagna, pick a street, any street to lead you to luxury. From Louis Vuitton to Zadig & Voltaire, from Hermes to YSL, it's all about beautiful fashion here. And European designers do cost less than in the U.S..

Of course, no Roman afternoon is complete without gelato and Venchi is the undisputed king of chocolate and ice cream. A small shop on the Via della Croce, it's very close to Piazza di Spagna. If available, try their orange peel dark chocolate flavor, with "doppia panna" - whipped cream inside the cone and on top of it. A good mid-afternoon snack. 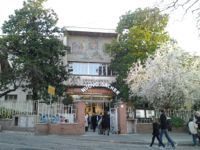 Once finished with shopping, relaxing a bit at the hotel on their rooftop for an "aperitivo" would be ideal. Then off to dinner, but no earlier than 8½ as no self-respecting Italian eats before nine. My favorite spot for great food and a typical, albeit chic and exclusive atmosphere, is Spirito DiVino in Trastevere. After dinner, you may even decide to drop by the Nuovo Sacher for a movie, courtesy of cinema connoisseur and master filmmaker Nanni Moretti, who owns the theater. Indie gems and world cinema classics are always to be found on Moretti's screen.

And the next day it's onward to the next destination - via Fiumicino international airport - most certainly feeling more fashionable and definitely inspired by Rome's classic beauty.