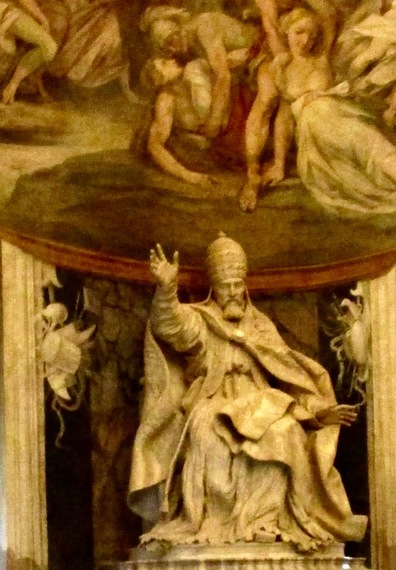 If you want a short history of Rome, say the equivalent of a diorama on a grand scale, go the Horatii and Curiatii Hall of the Musei Capitolini. There you will see frescoes by Guiseppe Cesari based on Livy which give you a Renaissance snapshot of the founding of Rome. The frescoes constitute a chronology. "Discovery of the She-Wolf" (1596) describes Faustolo coming upon the She-Wolf nursing Romulus and Remus under a fig tree. "Battle of Tullus Hostilius against the inhabitants of Veii and Fidenae" (1597-1601) depicts the early Romans defending themselves against nearby towns. "The Battle of the Orazi (Horatii) and Curiazi (Curiatii)" (1612-13) shows a duel between the Orazi (Romans) and the inhabitants of another nearby town Alba Longa (the Curiazi). The "Sabine Women Abduction" (1638-9) shows the Roman's stocking their city with women, the way we today stock ponds with koi. "Numa Pompilius institutes the cult of the vessel" (1638-9) is a hortatory work, showing the sacred fires being kept burning and finally "Romulus draws the line of 'square Rome'" underlines the classicism that would eventually be at war with an increasingly hedonistic society. The past is mediated by the present at least in the room where these frescoes were created. The gallery is presided over by two contemporaneous popes. On one side is Alessandro Algardi's bronze "Statue of Pope Innocent X" (as you will recall Innocent X was also the subject of Velasquez's famed portrait and Francis Bacon's infamous Screaming Pope series). And on the other is the "Statue of Pope Urban VIII" by Bernini whose magnificence could easily divert the attention of any gallery goer. The large hands illustrate the grasp and reach of the divine. Talk about being manhandled

More:
travelrome
Newsletter Sign Up
An essential daily guide to achieving the good life
Subscribe to our lifestyle email.
Successfully Subscribed!
Realness delivered to your inbox