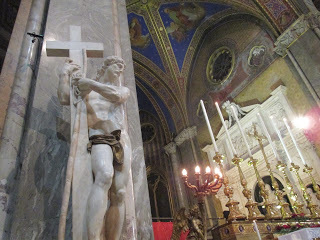 The Basilica di S. Maria sopra Minerva, the only remaining Gothic cathedral in Rome, was celebrating its last mass shortly after dusk. A choir singing "Oh Holy Night" peeled through the vaulted arches. The streets were filled with the usual sightseers to the Pantheon which is right around the corner. Minerva is the home to priceless works of art, amongst them Filippino Lippi's "Annunciation With St. Thomas of Aquino," Bernini's "Memorial to Maria Raggi," which turns marble into the illusion of fabric and Michelangelo's "Statue of the Redeemer"--not to speak of the fact that Fra Angelico is buried there. But what is most astonishing is the totally inauspicious façade which belies the treasures to be found within. It's a metaphor for something, though one isn't totally sure what. Rome certainly gets its cards on the table, a walking and talking historical theme park. But sopra Minerva is like that soft spoken kid who turns out to be a genius or the shy wallflower with the wondrous soul. Hidden beauty is the theme here along with the notion of the play within the play or invisible worlds which lurk beneath the surface of everyday reality. Perhaps the real significance lies in the word sanctuary which means sacred place. What's sacred is that which is enduring, but it's not always what's immediately visible to the eye.