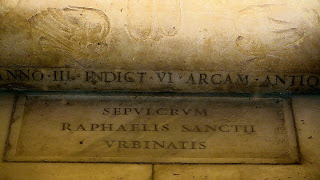 "ILLE HIC EST RAFFAEL TIMUIT QUO SOSPITE VINCI RERUM MAGRA PARENS ET MORIENTE MORI" ("Here lies Raphael, by whom Nature feared to be outdone while he lived, and when he died, feared that she herself would die") are the words of the 16th century scholar Cardinal Bembo, inscribed on Raphael's tomb in the Pantheon. Raphael had planned that he would be interred in the part of the Pantheon where the final rays of daylight from the 27 foot in diameter Oculus fall on his tomb. Lorenzetto's "Madonna del Sasso" ("Madonna of the Rock") which stands above his tomb was also his idea. Of course it's the perfect convergence of engineering and design that tourists come to see in the famed dome of the Pantheon, a perfect hemisphere on a cylindrical base. But Raphael is a hard act to follow if you're considering making funeral arrangements. Man plans and God laughs goes the old saw. However, Raphael plainly got the last laugh. One thinks of great works of art as being immortal, but the search for immortality has always eluded men. Carracci is also buried in The Pantheon, but Raphael's triumph, in this case, lies in the way he orchestrated his own memorial, embedding himself in what Stendhal once described as "the greatest monument to Roman antiquity," the pagan temple that became a Christian church.