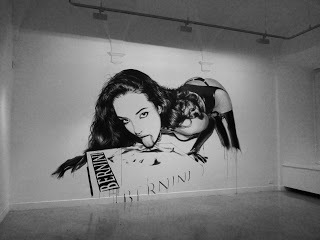 The pagan spirit never left Rome, despite the advent of Christianity. There's probably no city on earth where the sacred and the profane, religion and sacrilege co-exist so freely and openly. Donato Bramante's Tempietto is a jewel of Renaissance architecture, commemorating the martyrdom of St Peter, on the grounds of the church of San Montorio in Pietro. But you have to expand your notion of what constitutes a spiritual experience if you attempt to see Bramante's work anytime before February 16 as the façade of entranceway, is now covered with a poster of a naked woman advertising "SPQR(ca)VITA," a show of sadomasochistic paintings and drawings by Juan Francisco Casas. Granted the show is presented by the Spanish Academy, on whose grounds both the church and Tempietto are situated, but a painting of a woman on all fours, leashed, collared and licking a book on "Bernini" seems simpatico for Rome, particularly if you are caught up in the current resurgence of interest in the transgressive Marxist Christian filmmaker Pier Paolo Pasolini. In fact one of Casas' works, a painting of a bloodied cadaver entitled simply "Pier Paolo," obviously references the filmmaker's violent death. Other images in the exhibit include a topless woman with a bag over her head and a naked woman whose body is inscribed with the words, "your eyes can be so cruel just as I can be so cruel though I do believe in you." Visitors to the Tempietto will have their Augustinian moment when they choose to either turn left to the City of God embodied by a reliquary or take a right turn toward the world of flagellation and defilement of the flesh--which, one might argue, contains its own version of the crucifixion.