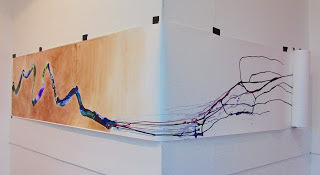 The Tiber runs through Rome, the Seine through Paris and the Thames, famously through London. "Sweet Thames, run softly, till I end my song," wrote Edmund Spenser in his "Prothalamion." The river's name probably derived from the same pre-Roman sources as Tiberius, which was a common name for those of both aristocratic and common estate. Romulus and Remus of course were left to sink or swim in the Tiber and thus began Rome and the phrase "crossing the Tiber" has taken on a religious significance to the extent that it connotes a kind of conversion to Catholicism and a recognition of the Papacy, as a representative of God on earth. The Tiber had a history of flooding up until 1876 when the city attempted to control the waters with stone breakwaters and streets called lungoteveri. The Tiber divides Rome. For instance if you are visiting the Colosseum or the Circus Maximus, which are part of the Rome you may know from postcards, you cross the Tiber at the Ponte Suplicio to enter Trastevere, which is a more bohemian part of the city full of winding ancient where artists studios compete with churches for the visitors attention. We associate the Seine with lovers, the Thames with royalty and the Tiber with empire. You might not talk about the Tiber like you do the Seine or the Thames and its not the subject of musical works like the Danube, but it's where Rome was founded and as you pass over it, you feel it's the elemental silent force out of which a civilization was created. As Julius Caesar crosses the Rubicon he makes the fatal choice between politics and power, his desire to be a hero or a politician, famously intoning "the die is cast." And we know where that landed him. "I see war, horrible wars, and the Tiber foaming with much blood," said Virgil in The Aeneid.