Earlier this week, I joined partners from Connect4Climate, Earth Day Italia, the people of Italy, and groups from around the world in a march that began at the Colosseum and culminated in Saint Peter's Square. In a strong show of unity, leaders from all the world's religions joined environmentalists and social justice advocates from many countries. Our purpose was to thank Pope Francis for his encyclical on climate and for his moral leadership on climate, while also drawing attention to the upcoming climate talks in Paris (COP21) and the need to tackle climate change head on as part of a global alliance and community. 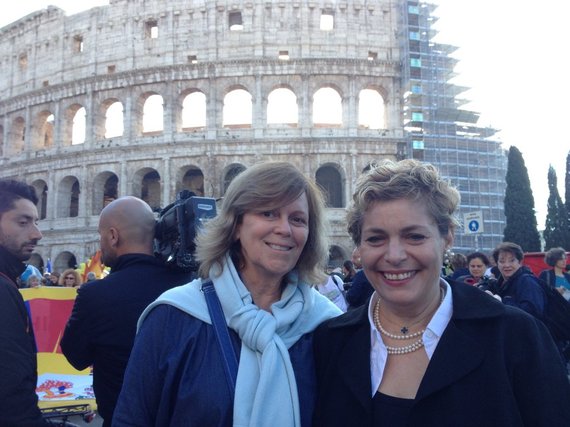 As president of Earth Day Network, I am honored to have been in Rome. I am honored to march alongside concerned citizens and fellow climate activists from around the world to demand action on climate change. At the conclusion of his remarks, given in Italian, Pope Francis thanked the organizers and told us how much he appreciated the work that went into putting together such an important event. He thanked groups like Earth Day Network, Earth Day Italia, and Connect4Climate that worked to turn out so many people. But in truth we were here to thank him. We were here to continue providing him with the support and grassroots he relies on to do climate work each and every day. And on that front, I believe the March for the Earth was a huge success.

The statement the Holy Father delivered to us is aimed at all the world's people--because we all have a responsibility to confront climate change. But more than that, it is directed at the global leaders and policy makers participating in the upcoming United Nations climate conference. This is our last best chance to address climate change--the defining issue of our day--before it is too late.

Pope Francis's encyclical and his late September address to the Congress served as springboards for the momentum building process leading up to the United Nations' Paris climate talks. Today, with COP21 nearly at hand, this march added to that momentum. The thousands and thousands of climate activists gathered today saw to that.

Beginning on November 30th and scheduled to conclude on December 11th, the United Nations is holding talks in Paris designed to put in place an agreement on climate change that will improve upon and replace the Kyoto Protocols. Participating nations have submitted their plans in advance of the talks, ranging from good to bad and everything in-between. A final agreement is expected to be unveiled at the close of the conference on December 11.