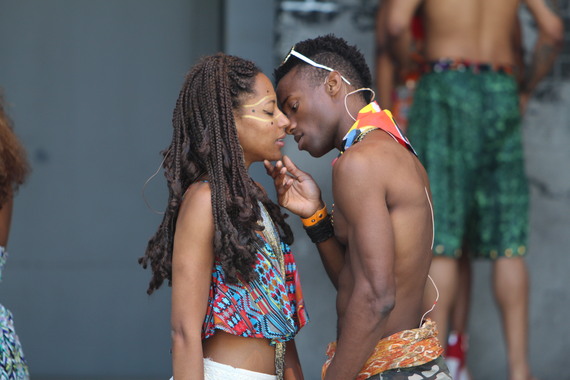 I recently had the pleasure of waiting a mere six hours to get free tickets to the Public Theater's production of "Much Ado About Nothing" in Central Park. The next night, I breezed into Marcus Garvey Park, no waiting or tickets required, for an equally invigorating production of "Romeo and Juliet," directed with deliberation and thoughtfulness by Justin Emeka. This second annual effort of the Classical Theatre of Harlem to position itself as the "Uptown Shakespeare in the Park" -- after last year's guffaw-inducing "Midsummer Night's Dream" -- demonstrates the company's ability to tackle tragedy while making Shakespeare completely modern and relevant. For those readers who don't have the good fortune to live in Harlem, this production is well worth the trip.

I have always loved "Romeo and Juliet." Say what you will, the play demonstrates that being in love "feels f***ing great while it lasts," as one Shakespeare scholar (and my former professor) once said with pith and eloquence. Sheldon Best and Natalie Paul portray the doomed lovers with urgency and attractiveness. But in transposing the setting to modern Harlem (and cleverly adapting the text without ever compromising it), Emeka and his team crystallize precisely why the stakes are so high. More than any other that I have seen, this "Romeo and Juliet" suffuses the feud between the Montagues and the Capulets with grave believability, a feat that even Baz Luhrmann's 1996 California-set film, with all of its guns and knives, failed to achieve. The families' conflict feels visceral, if absurd, and we understand precisely not only what everyone involved stands to lose in pursuing it but also the impetuous bravery of the lovers' choices.

The creative team infuses Shakespeare with music, accents and colors of Harlem, transforming the Capulets into an Island family and the apothecary into a dealer. The transposition is nearly entirely successful, indeed relevatory, and the production values are high despite a few microphone problems. The superb fight scenes, choreographed by Emmanuel Brown, pack major punch, and the street dancing, choreographed by Lakai Worrell, is illuminating if too infrequent. There are some unfortunate choices -- such as having the nurse exclaim, "Give me some tequila!" -- but luckily they are few.

Importantly, the production never sacrifices the centrality of the spoken word in its endeavor to bring the story to life. The supporting cast members are largely effective, confident with language and deliberate in their performances. (About half of the speaking roles are performed by Equity Actors.) The standout is Zainab Jah as Sister Laurence, whose honeyed voice and intensity bring the role, which has been recast for a woman, the required moral gravitas. When she speaks the line, "Art thou a man?" to Romeo, Jah recalibrates the entire play. 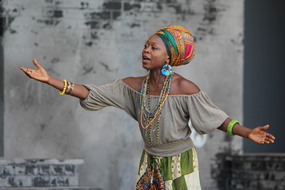 These tonal shifts are handled with aplomb, and the production becomes more powerful as it progresses. Following a splendid staging of that harrowing final scene, I left the park and headed into the Harlem air pondering love, yes, but also other crucial themes that Shakespeare wrote about so preternaturally: masculinity and its linkage with intra-group violence and the ways in which youth and parents nearly always misunderstand each other.