Paleontologists have long suspected that some dinosaurs shook their tail feathers to woo mates. And a new analysis of "Romeo and Juliet" -- bird-like oviraptor dinos found locked in a 75-million-year-old embrace -- is yielding new clues about the feathery mating theory.

“We discovered that, although both oviraptors were roughly the same size, the same age and otherwise identical in all anatomical regards, ‘Romeo’ had larger and specially shaped tail bones,” Scott Persons, a graduate student in paleontology at the University of Alberta in Canada, said in a written statement. “This indicates that it had a greater capacity for courtship displays and was likely a male.”

“Juliet” had shorter and simpler tail bones and was probably a female, according to Parsons, who led the research team.

He said the dinosaurs -- which were unearthed next to each other in the Gobi Desert of Mongolia in 2001 -- may very well have been a mating pair before they were buried alive in the collapse of a sand dune. 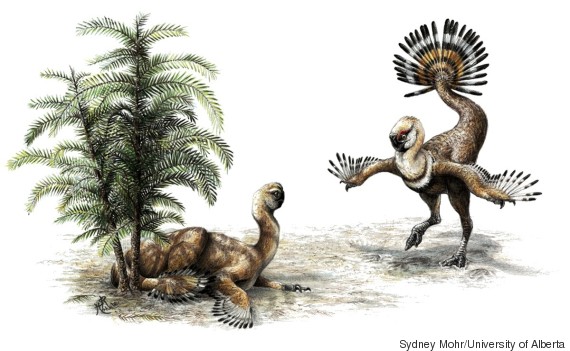 Artist's conception of an oviraptor using its tail feathers in a mating display.

Prehistoric romance. The researchers compared the fossilized remains of the dinosaur couple with the anatomy of modern-day birds, Discovery News reported. The comparison showed that the dinos sported long feathers on the ends of their tails.

Since the tails aren't suited for flight or combat, the researchers concluded, they must have had another purpose.

“Our theory," Persons said in the statement, "was that these large feather fans were used for the same purpose as the feather fans of many modern ground birds, like turkeys, peacocks and prairie chickens: they were used to enhance courtship displays."

Thrilling find. Persons told The Huffington Post in an email that the new finding was thrilling though not especially surprising, saying it was "exactly what I was looking for."

A paper describing the research was published online in the journal Scientific Reports on March 31, 2015.

How much do you know about dinosaurs? Check out the "Talk Nerdy To Me" video below for five new scientific findings that just may change the way you think about the prehistoric beasts.