There are five states that have a double digit number of electoral votes, where Obama and Romney each still have a decent 15 percent shot at winning: North Carolina (where Obama has a 31.8 percent chance), Florida (57.9), Virginia (73.6), Ohio (77.3), and Wisconsin (83.9). There is something striking when you look at a chart of the likelihood of any of them voting for Obama since August 1; there is a lot of movement, but very little crossing. 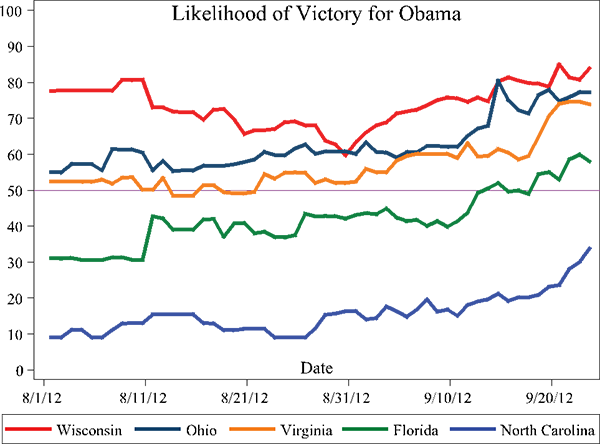 States respond to local shifts. Wisconsin's dip started just after their native son Paul Ryan joined the Republican ticket. We also know that the candidates' fortunes in states correlate with local economic trends, and that the huge differential across swing states in spending on advertisements and get-out-the-vote initiatives impacts the support and turnout in those states as well.

Yet trends still tend to be more national than regional or local. Year after year, granular predictions of the state-by-state outcome over the months preceding an election look similar to the above chart with few states cutting dramatically across the other states.

The likelihood of Romney winning North Carolina and Ohio is not much greater than the likelihood that he will win Ohio. Because the most likely way for Romney to win Ohio is a national trend that moves all of the states between North Carolina and Ohio into his column, picking off Ohio before states that currently favor Romney more is very unlikely. Conversely, the likelihood of Romney winning Ohio and losing North Carolina is almost negligible. (I am further examining the nature of these state-by-state relationships in a prediction game on my website, which readers are encouraged to play.)

This method of determining joint probability is called the ranking method and it has proven surprising difficult to beat this simple/transparent and reliable method. Drawing this method out to all states in the Electoral College, if you list all states from most likely for Romney to most likely for Obama, it is unlikely that any state moves more than a few points in rank. Thus, the quick and easy estimate for the likelihood of any candidate reaching 270 electoral votes is to figure out the state that flips the election if every state stays in their order. Below is the key section of the states 23-32 in that list:

The flip state is Ohio at 77.3 percent for Obama and 22.7 percent for Romney. This is a great, simple approximation for the likelihood of the election. It has tracked my more complex model of electoral victory, within 2 or 3 percentage points, for the entire election cycle.