Mitt Romney called Donald Trump a “con man,” and so did Marco Rubio and Michael Bloomberg.

For the news media, the fact that Trump is widely seen as a con man, even by many in his own party, has created thorny problems regarding how to cover him. The mainstream news media (aside from Fox News) generally endeavors to be fair and balanced in covering elections – but what does “fair and balanced” mean when covering a con man?

In aspiring for balance, does that mean news organizations should do as many pieces criticizing a con man candidate as criticizing his or her opponent? But wouldn’t the news media then be delinquent ― and unfair to the non-con candidate ― if they do just as many negative articles about a con man candidate like Trump as negative articles about a more conventional candidate, like Hillary Clinton, who also has problems with the truth.

Many news organizations have concluded that the fair and balanced way to cover Trump and Clinton is to be equally aggressive toward them when that is warranted. In other words, be critical and aggressive toward Trump or Clinton whenever they are found to tell falsehoods, cheat, cut corners or otherwise do wrong.

Trump’s most dangerous con of all: he is undermining our precious democracy by asserting that the election is rigged, and that he might not accept the election results.

Trump is in a league of his own in terms of telling falsehoods and lies, and that’s one reason the news media have often been tougher on him. Fact checkers have found Trump to be the most dishonest major party candidate they’ve ever encountered. The Washington Post’s Fact Checker has given a Four Pinocchio rating to an astonishing 63 percent of the 91 Trump statements it has examined – a Four Pinocchio rating means a statements was totally false. In contrast, 14 percent of Clinton’s statements received Four Pinocchios – a typical candidate gets Four Pinocchios 10 to 20 percent of the time. (I have no patience for Rush Limbaugh and others who repeatedly attack fact checkers as biased and not to be trusted. Limbaugh and his ilk attack fair-minded fact-checking referees for a simple, strategic reason: to delegitimize them in order to make it easier for the candidates they support to continue spewing their falsehoods.)

Mitt Romney and many others agree that Trump is the greatest con man ever nominated by a major party. Indeed, Trump has been compared to some of the great demagogues of history, like Senator Joseph McCarthy, who spectacularly and falsely stated that a horde of Communists worked in the federal government, and Governor Huey Long, who charmed voters with pie-in-the-sky, share-the-wealth promises that he’d deliver impossible-to-deliver levels of prosperity.

So why do Romney and others call Trump a con man? Trump has boasted that he knows more about ISIS than the generals. He promised that he’d release his tax returns if he ran for president, but he still hasn’t released them. He has repeatedly insisted he can’t release his returns because they’re under audit, but audits in no way preclude him or anyone else from releasing their returns. Trump demonizes trade with China and Mexico, but, whoops, his Trump-brand suits, shirts and ties are made overseas. Trump openly mocked a New York Times reporter with a disability, then denied ever doing so. He asserted that thousands of Muslims celebrated the 9/11 attacks on rooftops in New Jersey, but he has failed to provide a scintilla of evidence to buttress that false claim.

Trump has repeatedly said that America’s murder rate is the highest ever and that America’s taxes are the highest in the world, even though fact-checkers have repeatedly debunked those claims. Trump says that no one respects women more than he does, even though he has savagely mocked women for their looks, has acknowledged barging into the dressing rooms of teenage beauty contestants and has boasted of grabbing women by the pussy. Trump denounces illegal immigrants, yet he hired undocumented workers to do demolition work for Trump Tower. Trump initially proposed nearly $10 trillion in tax cuts over a decade along as well as a vast increase in military spending – all while absurdly promising he would balance the federal budget.

Long after Barack Obama produced his birth certificate, Trump continued to maintain that Obama was an alien born overseas. Trump asserts that Mexico will pay for his “beautiful wall” between the two countries—something that proud, Yanqui-resenting Mexico wouldn’t agree to in a million years. This past Friday Trump said the economy is “an absolute disaster” even though the jobless rate has dropped to 4.9 percent, the nation has added 15 million jobs since 2010 and the 5.2 percent jump in median household income last year was the highest on record. And then there’s Trump’s most dangerous con of all—he is undermining our precious democracy by asserting that the election is rigged, and that he might not accept the election results.

The list of Trump’s falsehoods and cons goes on and on – there was that snake-oil operation known as Trump University or Trump, by one count, has flip-flopped 138 times on the issues. We journalists pay a lot of attention to whether a candidate lies a little or a lot because that says something fundamental about a candidate’s character. Journalists, like other Americans, much prefer when candidates tell the truth – it shows whether a candidate is leveling with, or seeking to fool, the American people.

To be sure, Clinton, like most other politicians, has made mistakes and lied. It was politically unwise and all too cozy for her to speak to Goldman Sachs for $225,000 a speech. She originally hailed the Trans-Pacific Partnership as “the gold standard,” before flip-flopping and opposing it in the face of a tough challenge from Bernie Sanders. And it was very wrong of her to use a private server for her emails, but let’s not forget that many other officials have used private email addresses for government business, including many governors, senators and representatives as well as Colin Powell and Karl Rove and many other officials in the Bush/Cheney White House, even on some military matters. (So, why the many calls to jail Clinton over this, but not the many other officials who have done the same thing?)

To me, a journalist who has written for the past 20 years about American workers, the biggest mystery in this election (as I wrote for Huffington Post last week) is why are millions of normally tough-minded working-class voters rallying behind Trump, even though he is so widely seen as a con man. To be sure, many people are tired of the Clintons and are angry with the status quo. Wages have, until recently, stagnated for years, Corporate America has moved millions of jobs overseas, and the cost of college has skyrocketed. People want these problems fixed, and now comes Mr. Trump, a brash, charismatic, tough-talking showman and change agent who promises to make yu-u-ge changes. He often even pledges to do the impossible: to wipe out ISIS in a jiffy and to bring back jobs from overseas, from China, Mexico and elsewhere, that are never coming back. Millions of Americans have been charmed by the tune of this pied piper ― even though Romney and other Republicans have warned voters about him.

The greatest Republican of them all, Abraham Lincoln, cautioned us about con men, saying, “You can fool all the people some of the time, and some of the people all the time, but you cannot fool all the people all the time.” Whether Trump wins or loses on Tuesday, I am sure that for years to come, political scientists are going to study and debate how did it come to pass that in the year 2016, tens of millions of Americans voted for someone who Mitt Romney, Michael Bloomberg and so many others warned is an obvious con man.

Romney, Rubio And Many Others Have Called Trump A 'Con Man,' But Millions Of Voters Are Nonetheless Lining Up Behind Trump
Help! My Relatives Support Trump 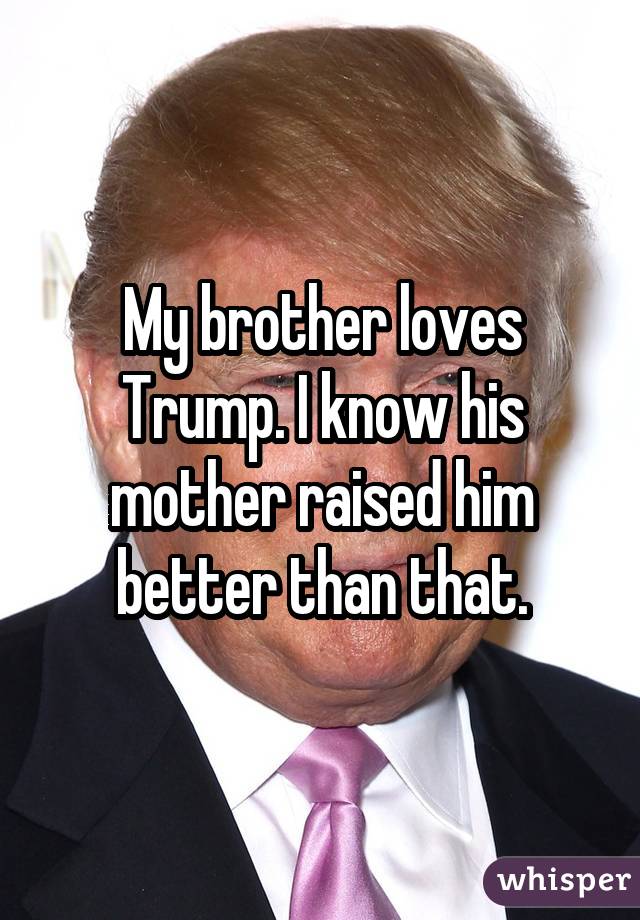