Small-business owners are leaning right leading up to the U.S. presidential election. Forty-nine percent of business owners plan to vote for presumptive Republican nominee Mitt Romney, while 32 percent of respondents say they'll support President Obama, according to a report released this week by Manta.

In Manta's last poll in January, the president was the clear winner against the Republican field as a whole, but received just 34 percent of the total vote. Now, with Romney emerging as the GOP favorite, Obama appears to face a challenge among business owners -- although Romney is yet to earn support from all the 61 percent of small-business owners who planned to back a Republican in January.

In the eight swing states shaping up to be the central election battleground, small businesses favor Romney even more, Manta found. Of the small-business owners surveyed in those states, 53 percent said they'll vote for Romney, while 32 percent said they will choose Obama.

Nationally, general polls show a tight race between the two candidates. Obama leads Romney 47 percent to 43 percent among registered voters, according to an NBC News/WSJ poll conducted May 16-20.

Romney must win at least 79 of the 101 electoral votes in swing states to prevail if all other states run true to their 2004 and 2008 partisan preferences, according to Bloomberg.

Manta's findings come on the heels of Romney's latest jab at Obama, calling him the worst president for small business since Jimmy Carter.

Small-business owners, which candidate has your vote right now? 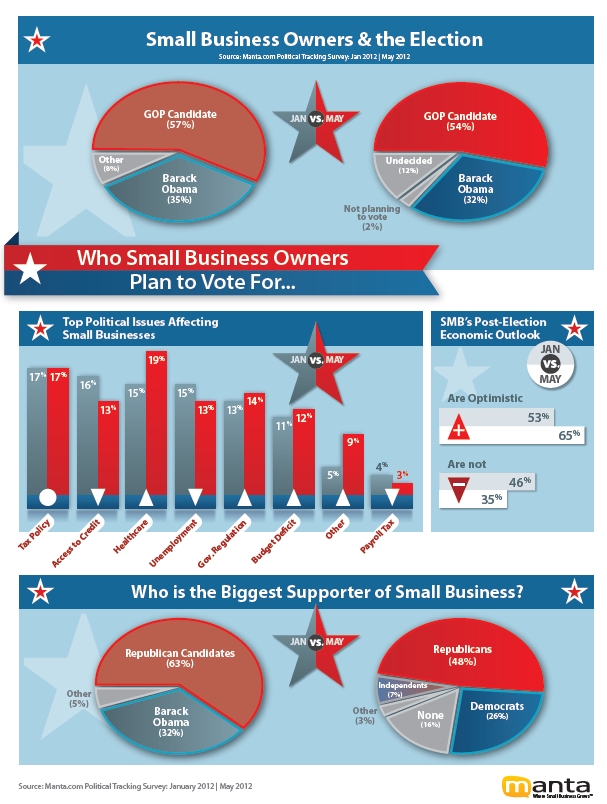