A supporter of Republican presidential candidate Mitt Romney was spotted wearing a T-shirt emblazoned with the words "Put the white back in the White House" at a campaign event this week: 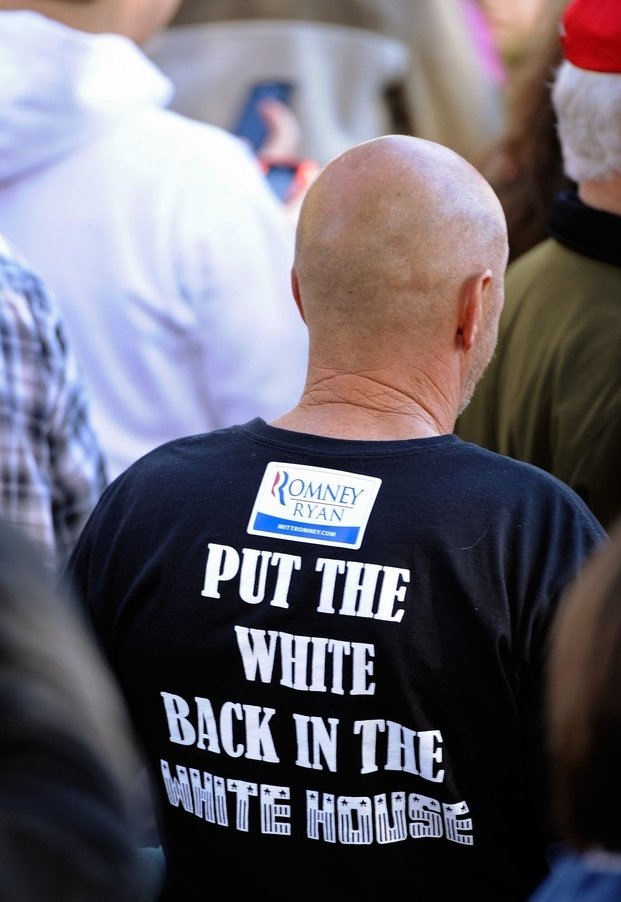 The Getty Images photograph was taken on Friday at a Romney/Ryan campaign event in Lancaster, Ohio.

According to Buzzfeed, a Romney spokesperson "commented that the shirt was reprehensible and has no place in this election."

This is not the first time in recent weeks that racism has been directed towards President Barack Obama.

On Tuesday, The Huffington Post reported that "a spate of symbolic protests against [the president] that have featured empty chairs and racist imagery continued this week in California, with an arrangement featuring a noose, watermelons and a birther sign."

"Go back to Kenya you idiot," read the sign that was reportedly set up along a remote road in Santa Clara County, Calif.

And last month, an Obama supporter in Texas said her Obama/Biden yard sign had been vandalized with the words "N*GGER LOVER -- Obama Sucks D*ck!"

"We have at least 4 African American families living on this street. I’m so offended," said the woman in the wake of the vandalism. "Not just because whoever did this is ignorant and misinformed and trespassed and vandalized my sign, but infinitely more for my neighbors who might have driven by and seen it.”

Correction: The anti-Obama birther sign was set up along a remote road in Morgan Hill, Santa Clara County, Calif., not Santa Clara.