Let's start with a fact: Ninety-nine percent of American women who've had sex have used contraception. This particular fact is arguably the cornerstone -- or a cornerstone -- on which an important part of our private lives are built -- at least for those of us who have sex and want to plan decisions like when we have a family.

And this brings us to a second fact. This election year is the first in which American's access to contraception will be dramatically increased or dramatically scaled back depending on who wins the Oval Office. With contraceptive policy, decision-making power is not equally distributed among the branches of government. Almost all decisions can be taken by one federal official: the president.

And so, with less than a month to the election, it's important to understand how immediate and encompassing the changes could be. Mitt Romney and Barack Obama have very different views of whether people should have access to contraception

If elected president, Mitt Romney has announced his plan to do three things as it relates to contraception. They are:

1. Romney plans to end Title X, the nation's contraception program for low-income Americans that serves 5 million people per year and is estimated to prevent one million unintended pregnancies each year too. (it also saves taxpayers $3.4 billion in costs annually that otherwise would have been borne by Medicaid for prenatal care, delivery and infant care.) Title X currently supports six in ten of all family planning health centers in the United States. Romney plans to eliminate the program and with it coverage of contraception to more than 4 million people.

2. Romney will, as he put it, "Get rid" of Planned Parenthood. Not an empty threat or a misleading one. Last year, the Republicans came within a hair of shutting the federal government down because they wanted to strip Planned Parenthood of its federal funding. President Obama held firm, winning the game of chicken. But Romney won't be a defender of what is the largest provider of contraception in the country. If Planned Parenthood takes that massive hit, losing the $487 million of the federal funding it receives from Medicaid for contraceptive services and other federal grants for STI treatment, prevention and cancer screenings, it will be cut at the knees. The defunding would eliminate access to care at Planned Parenthood for half of its patients, 1.5 million people a year.

3. Romney will remove contraceptive coverage from Obamacare. Even if Romney doesn't succeed in reversing Obamacare, which he promises he will, he would still eliminate contraception. The Secretary of HHS who is appointed by the President can simply highlight the word contraception and press delete.

Millions of Americans will be stripped of contraceptive access in these three acts promised by Romney.

The comments section of this post will no doubt be filled by those asking, "Why should we pay for you to have sex?" This is the wrong question. Family planning is one of the most widely relied on preventive health services used by Americans. Access to contraception reduces unintended pregnancy, resulting in future pregnancies that are healthier, healthier mothers and healthier babies. All these outcomes save money too. Restricting access to contraception leads to a dramatic increase in unintended pregnancy as well as surges in maternal death.

There's one other guarantee with the Romney plan: more abortions. Like most Republican pro-lifers, Romney says he finds abortion unconscionable, but won't support the most obvious means to reduce their number.

Family planning is the foundation on which many Americans structure their lives -- especially in tough times. In fact, when the economy suffers, family planning providers report a surge in patients getting long-term contraceptive methods, like IUDs and vasectomies. Supporting one's family is not only an American value, it's a biological instinct. The right wing has tried to shame those who use contraception at all - think of Rush Limbaugh calling Sandra Fluke a slut for merely saying contraception should be available to women in college. But for most Americans contraception is a way to behave responsibly.

The war on contraception is escalating and will continue beyond the election too, and anything that can bring attention to the cause is worthwhile. President Obama has done it, Planned Parenthood has done it, and even I, in a modest way, have tried to draw attention to this political conflict by creating a 2013 calendar featuring photographs of leaders in the war on contraception, the people who are defending American's ability to plan their families and enjoy healthy sex lives free from unwanted, life-altering and avoidable consequences, as it should be. If you agree, please consider supporting this campaign and spreading the word. 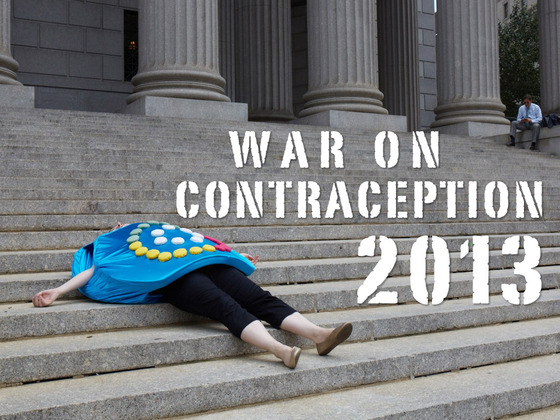