Get ready New York City - Ron and Laura Grawsill of Bakersfield, California are going to be taking over for the next week. Fresh from a run in Los Angeles and winning 16 awards and nominations on the festival circuit, Ron and Laura Take Back America, the year's funniest political mockumentary, will be screening at Cinema Village (22 East 12th St) beginning March 25. 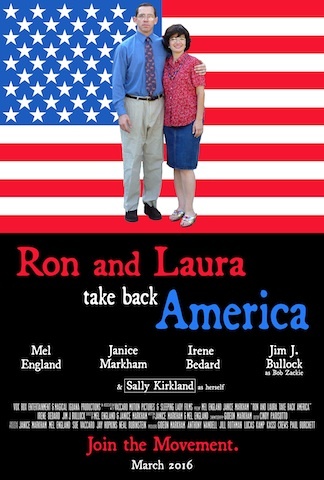 Mel England (Ron) and Janice Markham (Laura) play the awkwardly lovable, titular two person army desperately clinging to their far right wing values ready to take down Obamacare, immigration reform, gay marriage, and much more. Both actors have backgrounds in improv and live theatre, and brought much to the mockumentary table including an encyclopedic passion of Christopher Guest's films, Portlandia, and the Granddaddy of politcially incorrect situation comedies, All In The Family. I had the pleasure of chatting with these two comedy talents who not only star in the film, but co-wrote and co-directed it.

Xaque Gruber: Tell me how did you dream this one up?    Janice Markham: Well, around the time of the big Obamacare debate I was working on my interview show for Free Speech TV during the contentious fight over healthcare policy. So, when John Mackey, the CEO of Whole Foods, wrote an op-ed decrying Obamacare calling it (and I paraphrase) that it was a swift march towards a Communist takeover. Groups of Whole Foods shoppers banded together to boycott the store as many felt that this rich businessman was out of touch with the rest of us. So, then some conservatives saw what was happening and staged "buycotts" of people swarming to the nearest Whole Foods to support John Mackey, a true American! Well, I became obsessed by these various factions, particularly the buycotters, many of whom had no idea about Whole Foods, but were trying to fight for a healthcare reform-free America. That's when I called Mel and asked him to play my husband for a 4-5 minute Youtube video about a conservative couple trying to reclaim their country by purchasing organic kale and quinoa. Lucky for me, Mel agreed, the project expanded into a feature film mockumentary, and seven years later, we open in L.A. and N.Y. right in the middle of election season!

Mel England: When Janice called me with this idea to make a short film I thought "wow, this is funny," because, growing up with hippie parents in Texas, I was a little liberal kid, in a sea of conservatives. My first job was in a health food store! I juiced the wheat grass! So I thought, this is funny, this conservative couple shopping in a place you'd think only liberals go, to a granola health food store, to support the CEO who is against Obamacare! You just can't make this stuff up.

XG: Would you be friends with Ron and Laura? Do you know people like this? How are you similar to Laura?

JM: Great questions! I do think I could be friendly towards them, but I don't think I could be great friends, as Ron and Laura express themselves always with the veil of fear that they carry around with them. They take great issue with those who are different, so there is this intolerance that they live with that is not a part of my life. I do know people like this, and I find it very sad, really. One thing that was very important to us in developing these characters is that even with the fear, conservatism, racism and homophobia, there is a humanity to them. But, for those of us who are more tolerant and progressive-minded, we need to be able to really understand where these people are coming from and what this climate of fear really is. And, also, we recognize that liberals are not immune from judgment, profiling and intolerance.

ME: I'm pretty sure Ron wouldn't want to be friends with me (laughs), but yeah, I actually do know lots of people who are like them. Of course, this movie is a comedy, and we actually try to make fun of everyone.   JM: My strongest connection to Laura is that we are both Moms, but she and I see the world though a very different lens. Laura is very old-school in her perception of gender roles. She really does see Ron as head of the household, she often checks in on what he thinks, what he believes she should say and do. However, she is actually emotionally stronger than Ron, although she does not really see that. I think Laura wants to feel sure of everything, and she's pretty scared. It's a scary world out there for her. 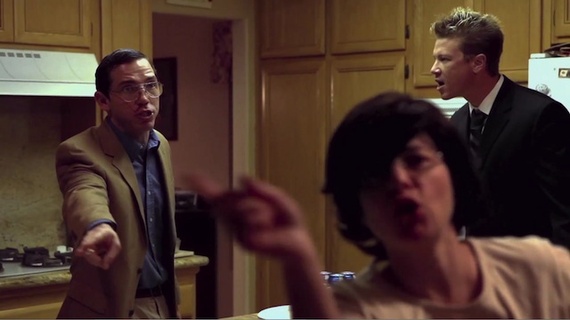 XG: You have a wonderful cameo by Sally Kirkland - how did she become involved in this project?

JM: I know, isn't she fantastic?! I'll hand this question over to Mel...

ME: Sally and I got to know each other when she was in my friend Craig Chester's hilarious film Adam and Steve. I met her at the premiere, then through synchronicity we ran into each other at a peace march against the Iraq War later that year, and then a couple years later she signed onto a movie project to play my mom! So when we were shooting this, we have a character in the film played by the fabulous and hilarious Jim J. Bullock, who plays the Celebrity Designer to the Stars, Bob Zackie, and Laura kind of becomes obsessed with him. Anyway suddenly it occurred to me, we have to call Sally to be one of the fictional Bob Zackie's clients. Sally famously went to the Oscars in 87 when she was nominated for Best Actress for Anna wearing a Bob Mackie, and made quite a name for herself over the years wearing the most colorful and outrageous outfits on the red carpet, so we thought who better than Sally to play herself in the film? I won't give it away, but I'll just say, Sally sort of steals the show near the end of the film! 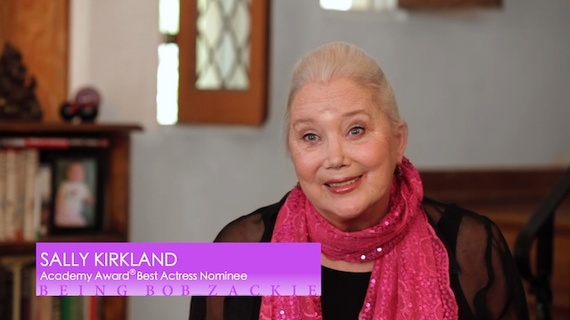 XG: The timing of this film's release while certain Presidential candidates are on TV attacking gay marriage, Obamacare and Muslim Americans tells me your finger is on a pulse. Would you like for Donald Trump and others like him to see this film?   JM: We would love politicians from both sides of the aisle to see this film. It's interesting, some of the Republicans we know who have seen the film actually relate to some points of view that Ron and Laura have, but they are fine with the satire. It's like people of all political stripes being able to watch All in the Family. I would be curious to know what politicians would think of Ron and Laura, even someone like Bernie Sanders, who believes his brand of Democratic Socialism makes the most sense. But, Mel and I took great care to make these characters relatable. 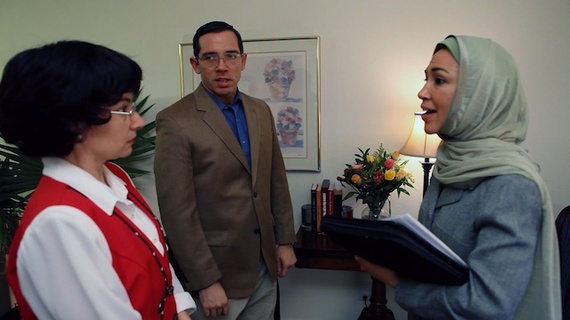 For more information check out: http://www.ronandlauratakebackamerica.com/

Parody All In The Family Comedy Republican Party Queer Life