A Canadian man claims he purchased a cup of coffee from a Fredericton, New Brunswick, McDonald’s on Monday and found a small, deceased rodent at the bottom of his cup, the Times Colonist reports.

Ron Morais, 57, told the CBC that when he took the lid off of his cup to drink the last sip of coffee, “there was a little bit of a surprise in my coffee cup. It was a dead mouse.” 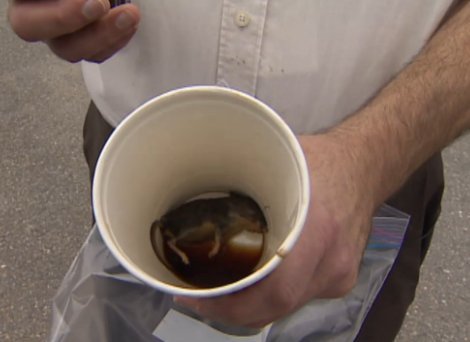 He also said there was some mouse poop in the cup.

Morais’ coworker, Brad Patterson, told the CBC he would have thought he was lying if he hadn’t “been there and seen Ron drink all that coffee down to the last drop.”

McDonald’s Canada said in a statement that “We are continuing to investigate this isolated incident and have reached out to the customer to obtain the product sample.”

Morais is saying the story is not a hoax and that he doesn’t even plan to sue McDonald’s. However, if he is telling the truth, he probably should get to a doctor fairly quickly — mouse droppings can transmit a host of terrible illnesses.