When I was growing up, the most trusted name in news was Walter Cronkite. Today, they are Jon Stewart and Stephen Colbert.

I don't know whether Cronkite was delivering the goods every weeknight, but he surely wasn't upstaged by Johnny Carson and Ed McMahon. That's not a slap at Stewart or Colbert, whose courageous attempts at marrying real news with humor appears to be the last bastion of political truth in America.

Well, there is one exception: Congressman Ron Paul (R-TX).

Paul supporters initiated a poll on the unofficial Web site ronpaul.com on Feb. 18 asking the question, "Should Ron Paul run for President in 2012?" By March 1, the poll results claimed more than 21,000 registrants, with a resounding 92 percent (20,060 votes) in favor of Paul's presumed candidacy.

I understand their zeal.

If the evening news were delivered by Paul, it would sound like this:

"Good evening. Today, while Hillary Clinton presides over the construction of a $1 billion State Department embassy in London, a member of Congress returned $100,000 to the Treasury, recognizing the need for all Americans to tighten our belts during tough economic times. That frugal leader is me. Congratulations are not in order, however. The money is already being used to start construction on the new moat surrounding Clinton's London fortress. 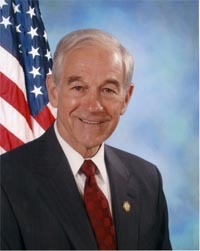 "In other news, the Federal Reserve continues its stalwart battle against the American people, refusing to comply with a court order to open its books to a public audit. The Fed claims the people may not peek at their securities for security reasons.

"Congress is currently seeking to intervene with a bill that will, if it becomes law, compel the Fed to explain to the public what it did with more than $2 trillion in U.S. securities.

"The battle is expected to rage on with no end in sight. The former head of the New York Federal Reserve, Timothy Geithner, was in charge when Bloomberg sued the Fed for public information. Bloomberg won. However, the only movement in the war has been Geithner moving to Secretary of the Treasury.

"I am leading the charge to force the Fed to adhere to the rule of law. I'm not sure what actions the White House, Treasury, Senate Finance Committee or House Financial Services Committee are taking. Given media and Justice Department's current stalemate with the Fed, I'll leave the answer up to you.

"In related news, the four financial Horsemen of the Apocalypse -- Obama, Geithner, Frank and Dodd -- all offered 'no comment' when asked why they could not enforce the law and order the Fed to open its books.

"And finally, we turn to my guest tonight, Robert Auerbach. His book, Deception and Abuse at the Fed, discloses a sinister tale of treachery and terrorism by Saddam Hussein and his financier, the Federal Reserve, which reportedly sent Hussein $5.5 billion in support of Iraq's invasion of Iran during the 1980s. Time magazine's Man of the Year, Fed Chairman Ben Bernanke, appears to be clueless about the Fed's involvement in funding a terrorist nation's war machine. We'll be back after these messages to talk with Mr. Auerbach, who will provide Mr. Bernanke the facts he's missing."

It's a shame that Ron Paul is a member of Congress and not the head of a major news organization. Many important stories the American people need to know about seldom seem to grow legs to run as fast as the kabuki theater which media often spread to placate the public.

During the run-up to the apparent monumentally important Health Care Summit, media sought to give voice to the loudest clowns in the political circus. The hype that was made of two opposing political sides merely sitting down at a televised table of discussion built the event into a strategic chess match to the death. The public expected traps of doom to devour fear-filled Republicans while Democrats performed the media's oft-repeated line: "kabuki theater."

Media hype completely overshadowed the all-important fact that an articulate, intelligent, courageous president demanded two politically polar opposites come together in front of the American people and transparently discuss one of the most important issues impacting the nation. Juxtapose that not-too-small fact against the former inarticulate, rudderless buffoon who led his circus choir with a chorus of "defeat the enemy" and it's not too difficult to see the real story media missed.

I don't think Paul's supporters ought to push him to run for the White House. There aren't enough honest politicians in Congress or enough well-informed people among the voting electorate to overcome the propaganda that will dominate the press.

Instead, Paul's greatest contribution to the American public could be to recover the Fourth Estate. He can start by becoming president of Fox News.