UFC women’s bantamweight champion and all-around American badass Ronda Rousey said on ESPN’s Sportscenter Thursday that she believes she could beat “100 percent” of the UFC male fighters in her weight class.

“UFC announcer Joe Rogan has stated that he thinks you might be able to beat 50 percent of UFC male bantamweight fighters,” Sportscenter anchor Matt Barrie said. “So now this debate has started. Ronda, what do you think of about Rogan’s comment?”

"I never say that I'm incapable of beating anybody, because I don't believe in putting limits on myself," Rousey replied. "So I mean, I would have to say if you're just talking about what's in the realm of possibility of what's possible of who I could beat, well, I could beat 100 percent of them. But, um, you can't tell me that there's a zero percent chance that I can beat anyone on the planet, so I'm never gonna say that."

The exchange starts around 2:55

Rousey was the star of the American sports scene last Saturday night when she beat Cat Zingano in just 14 seconds to retain her title, pushing her overall record to 11-0. Afterward, Rogan said he believed Rousey could beat half the men in her weight class.

"There's a lot of guys her size she could beat," Rogan said on The Dan Lebatard Show. "I mean, a lot. If you took the roster of the UFC's bantamweights, 135 pounds, and you paired them up against Ronda Rousey, she might be able to beat 50 percent of them. That's not a joke."

Not too man to admit she would beat me much quicker than this.

As MMAFighting.com notes, however, Rousey also once said she could beat 240-pound heavyweight champion Cain Velasquez. So, yeah, maybe take the comment with a grain of confidence-infused salt. 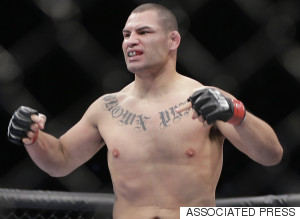 This man looks scary/hard to beat.

One person who isn’t excited to see Rousey fight a man? Her mom.

"Seriously, that's a stupid idea,” Rousey’s mother, AnnMaria De Mars, a former world judo champion, said of the idea. “I'm as much a feminist as anyone but the fact is that biologically, there's a difference between men and women. Hello. Duh. A woman who is 135 pounds and a man who is 135 pounds are not physically equal."

Something tell us Rousey’s reaction to that comment was something along the lines of: “Mommmmmmmmmmmmmmmmm, stop!”