A true artist sees things the rest of us don't see, and refreshes our vision in new and different ways. Such is the case with acclaimed photojournalist Ronnie Farley, whom I wrote about in 2012 when she toured a gallery exhibit featuring her portraits of American Cowgirls. Farley's newest book, New York Water Towers, takes as its subject the "wooden-steins-on-stilts" that dot the New York City landscape, which she has been photographing since 1982. 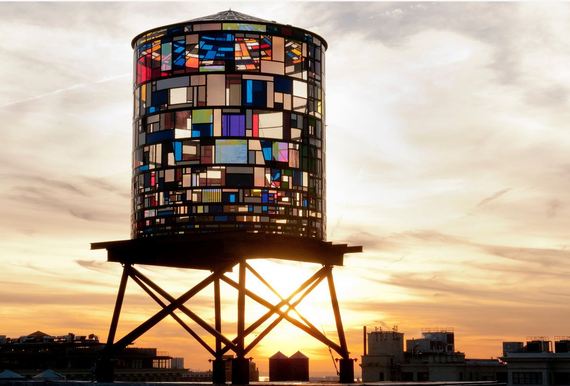 Farley's images are measured, compelling, and profound, whether the subject is portraits (as with her books Women of the Native Struggle: Portraits and Testimony and Cowgirls: Contemporary Portraits of the American West) or her atmospheric studies of American life (Diary of A Pedestrian: A New York Memoir, and the newest, New York Water Towers). Her current work is greatly inspired by water - and water shortages. "We have to acknowledge that we are about 70 percent water and so is the earth. We should know exactly what we are drinking," she says.

"Especially in New York," Farley continues, "we need to understand that as beautiful as the water towers are they also contain the source of all life. For me water is a sacred thing, it's the makeup of everything there is. Everything that is created by man needs water and we're losing it drastically in places like California and the Midwest. This is a wake-up call; it's a fast dwindling resource and the most important one we have."

Ronnie Farley's work has been shown both nationally and internationally, and is in the permanent collections of the Museum of the City of New York, The National Museum of the American Indian, The Rock and Roll Hall of Fame Museum, The Nicolaysen Museum, and the National Cowgirl Museum and Hall of Fame. Farley's photographs have appeared in Rolling Stone, USA Today, Sierra Magazine, Western Horseman and The Sunday Times of London. In addition to her own photography, she also spent twenty years at the Associated Press as photographer, photo librarian, and national photo editor.

Farley's water tower images and new book will be feted with a special two-week show at Long Island City's Matted LIC Gallery, opening this Sunday November 9 through Sunday November 23. Matted LIC, easily accessible to Manhattan via the #7 train, is a gallery, museum quality custom framer, and eclectic gift shop that features the work of many local artists who have been inspired by their urban surroundings. New York Water Towers will be available for sale at the gallery show and the artist will be signing copies on Sunday, November 9th between 2 and 6pm. Prints will also be available for purchase.

Owner/gallery director Donna Drimer says, "We are pleased to host Ronnie Farley's water tower images in our space. Long Island City is a dynamic community that is transitioning from a frenetic industrial past into a burgeoning residential, business and arts center in the mode of Soho, Brooklyn Heights or Williamsburg. A fascinating vestige of that indelible heritage is portrayed in Ronnie's work."